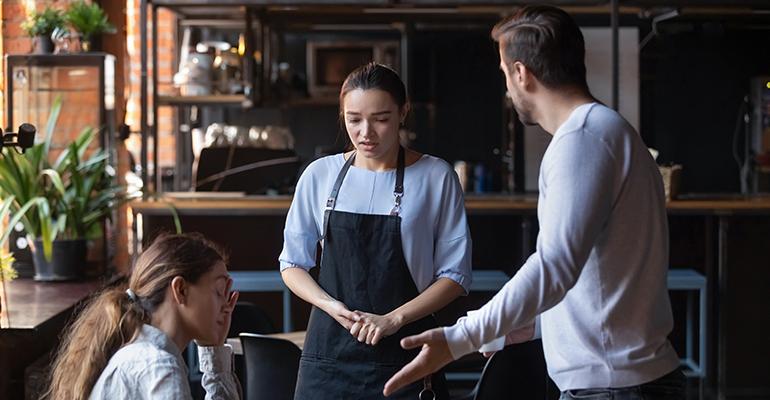 As patrons emerge back into restaurants from pandemic restrictions, operators are facing a growing number of customers with higher demands and deeper frustrations than before COVID-19.

“Pent-up demand Is high and expectations are high, so clearly there's tension,” said Lisa W. Miller, a Dallas-based consumer market strategist, who has been tracking consumer sentiment since the pandemic was declared in March 2020 and framing it as the “journey back to joy.”

Mille’s firm found in a survey earlier in June that 70% of U.S. respondents agreed or strongly agreed that frontline employees/servers need to be treated better by customers and that too much bad customer behavior happening.

The bad behavior and protocol confusion has been exhibited nationwide, evidenced nearly every day this week.

- On Monday, police in Pembroke Pines, Fla., solicited the public’s help in finding a man who was captured on camera shoving a woman to the ground in line at a Smoothie King in an April altercation over a face mask.

NEED TO IDENTIFY: Officers are still seeking the identity of this unknown suspect who battered a victim on April 20, 2021 at Smoothie King (10550 Pines Boulevard). Please contact Detective Stogner at 954-431-2225 with any information. Case # PPPD21OFF024704 pic.twitter.com/HkMY05rjk1

- On Tuesday, police in Orland Park, Ill., were called to a Hooters after a customer got in a loud argument over a bill payment. Police said she was charged with disorderly conduct.

- On Wednesday, two women pleaded guilty and two others entered a pretrial diversion program for their roles in what a Baton Rouge, La., prosecutor called a "large fight" between a group of patrons and a Chili's Grill & Bar hostess over the restaurant's coronavirus-related dining rules last August. All four suspects were barred from entering any Chili's restaurant during the next year. The teenage hostess received five stitches at a hospital to close a wound above her right eye.

- On Thursday, rules got no easier for consumers when the New Orleans' Mercedes-Benz Superdome said it would continue to require masks of guests throughout the summer when the venues are at 100% capacity.

Miller said restaurant operators are facing a number of pain points, and a majority are linked to staffing challenges.

Miller’s survey found the percentage of customers frustrated with a lack of staff during a recent visit has double since February. In the June survey, 43% of respondents expressed frustration with staffing, up from 21% in February.

“We can't sacrifice today's guest experience to make up for last year's lost sales,” Miller noted. “Hard choices will need to be made.”

Miller said her best advice is: “Make sure that your seating capacity aligns with your staffing capacity.”

Restaurants are currently in what she called “a perfect storm” with staffing shortages and price and inflation concerns, and that is impacting consumer sentiment.

“What I'm seeing is that the intent to revisit or return has actually dipped a little bit,” Miller said, “and so that means that those experiences are impacting future visits.”

In addition, among anxious and very anxious consumers, which are two of five groups that Miller categorizes, concerns about safety remain high. In the June survey, 45% of those consumers who remained “very anxious” about the dine-in restaurant visit “didn’t feel that enough precautions were being taken to keep me safe.” But among the “first out the door” respondents, only 7% were concerned about the safety of the dine-in environment.

Among those in the “very anxious” group, Miller said, “They want to see that you’re visible cleaning. They want to feel comfortable with basics like bussing tables and wiping down things.”

“Lead with joy and reassure with safety,” Miller said.