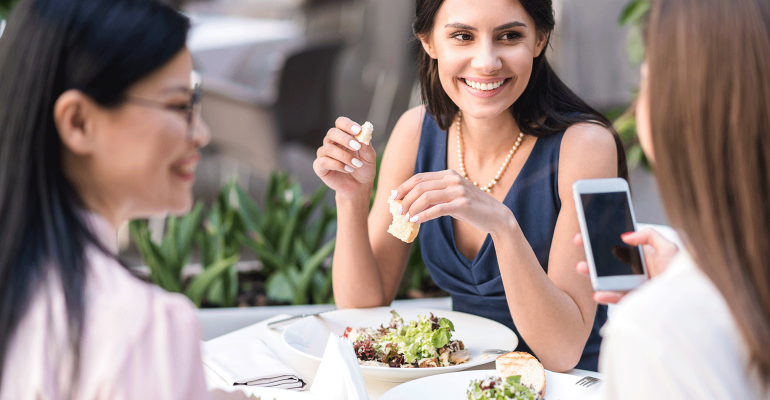 “Female friendly?” At first blush it sounded awfully 20th century, Bret, and also a little off-putting to me.

The story reported that the concept “fills a niche for quality, mid-range dining marketed to women,” which sounds suspiciously like the niche already occupied by successful chains, like Panera Bread, that draw substantial numbers of female diners.

But what saved me from grabbing my megaphone and rushing to the barricades on behalf of slighted male patrons everywhere was the underlying rationale behind the brand: “Women are the ones posting pictures on Instagram … [and] social media has changed the way you build a brand.”

In other words, the bright, plant-filled dining rooms with natural brick walls accented by pretty art, nifty sconces and slogans like “Rosé All Day” are meant to stimulate photo taking as much as drinking and dining. 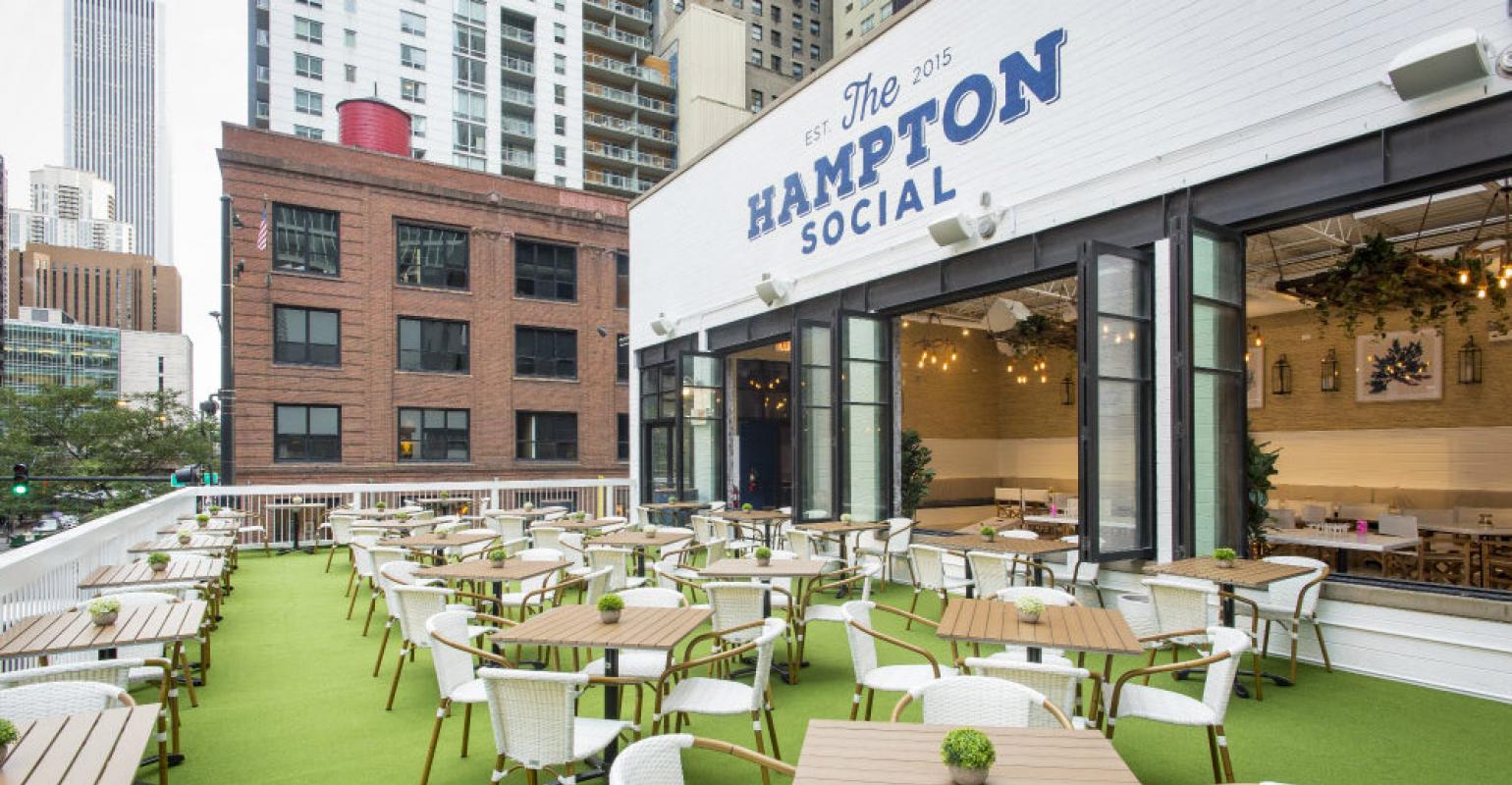 We know, of course, that The Hampton Social isn’t the first operation aimed at attracting female diners. Fleming’s Steakhouse, for one, built its business on welcoming women by toning down the traditionally dark-paneled, smoked-filled eating emporiums appealing to manly meat eaters.  But Hampton Social is more direct in courting women, and it reminds me of All Bar One, the United Kingdom-based pub concept.

Founded in the early 1990s with a similarly bright and airy interior, its objective was to “reduce the intimidation factor” of the traditional British pub, also quintessentially dark, smoke-filled and male-dominated.

A subtext and secondary aim may have been to provide a safe haven amidst Britain’s problems with public drunkenness.

All Bar One has grown to 52 units and currently features a Veganuary food menu along with a special beverage promotion. The former includes a Spiced Cauliflower Shank main dish, and the latter introduces the Seedlip and Tonic cocktail. The titular Seedlip is billed as the world’s first nonalcoholic gin; it’s distilled, made from botanicals and getting big play on the other side of the pond. It’s beginning to make waves on this side, too, in No-gronis and Marti-nos. In New York City, for example, The Fat Radish eschews these bad puns in favor of its Seedlip Collins made with fennel syrup and lemon juice.

I have a couple of thoughts on this before I ask for yours. First, the notion of a female-oriented operation in this context strikes me as dumb-like-a-fox marketing. After all, where young women congregate, so too do young men, even if it means being surrounded on all sides by ’grammable wall hangings and overstuffed pillows.

Second, the founder of The Hampton Social was quoted in Restaurant Hospitality as saying that he’s not building a chain of restaurants so much as a “lifestyle brand.” This last phrase stopped me in my tracks; totally ill-defined, it’s suddenly turning up everywhere in many contexts. If we can define it appropriately, it could have real strategic significance to our business at a time when many established restaurants are struggling under the weight of operating assumptions that may be outdated in today’s marketplace.

So I wonder what your take is on all this, Bret? Do you foresee an uptick in concepts catering to a specific demographic, whether male or female, old or young? Or does it perhaps portend a longer-term shift away from conventional demographics that have been the guiding lights of prior generations of restaurant marketers and their replacement by segmentation based on social media use?

Nancy, there are many reasons for restaurants to focus their marketing on women. My colleague, Joanna Fantozzi, recently reported that women make 85 percent of all consumer purchasing decisions, according to a report in 2017 by the Women’s Foodservice Forum, McKinsey & Co. and LeanIn.org.

She also found that women tend to be more generous tippers and, as you point out, they’re more likely to share their experiences via social media.

On top of that, as you said, men tend to like to go where they can find women. That has long been the motivation for the ladies’ nights that have been regular promotions in bars for decades.

But I think restaurants run the risk of missing out, or even alienating their customers, if they assume what their customers want. My female friends tend to prefer red wine over rosé and whiskey served neat rather than fruity cocktails, except, of course, for my female friends who prefer rosé and fruity drinks. Conversely, I know plenty of men who wouldn’t hesitate to order a pretty pink cocktail if that’s what they were in the mood for, and I can’t think of any who are too insecure with their masculinity to sip a summertime Frosé.

As for Veganuary and spirit-free cocktails, my most strident vegan and vegetarian friends are men, and I know a lot more men than women who don’t drink.

I have plenty of friends, but I wouldn’t say they’re a statistically significant sample. My point, rather, is that operators should get to know their customers and what they really want, rather than making broad assumptions based on their appearance or what types of chromosome they have.

In a particularly lurid example of jumping to conclusions, a restaurant on New York’s tony Upper East Side (I won’t repeat its name because the reports are unconfirmed) recently ran into trouble on social media when it was reported that one guest, a woman dining alone, was asked to sit at a table rather than the bar. She later reportedly learned, to her horror, that she had been moved as part of a crackdown on call girls. Talk about awkward.

Fantozzi, quoting Holly Fox of the consulting group Last Word Hospitality, points to other elements that would actually be more female friendly than lighter wood and an airier interior, such as well-lit entranceways and systems for ride-sharing or taxi-hailing, to help ensure their safety.

It seems to me that what makes a foodservice establishment female friendly is a staff that’s paying attention.

Some of New York City’s more stylish cocktail lounges have unwritten but nonetheless strictly enforced policies about how men should approach women. In short, they shouldn’t. Instead, they may ask their server or bartender to intercede on their behalf, inviting women to accept or decline their invitation without undue awkwardness.

As a representative from Brandy Library explained to me in an email: “We try to maintain a comfortable and non-crowded environment. We don’t allow standing in order to help us create such an environment. We prefer our customers to enjoy the company of those guests within their own groups. If there happens to be a patron who wants to say hello to someone at the bar, we normally allow a small grace period to allow them to move back on to their respective party, but if that window of time passes, or we notice that such an encounter is awkward or uncomfortable, we will step in and dissolve the situation by encouraging the aggressor to retake his seat.” 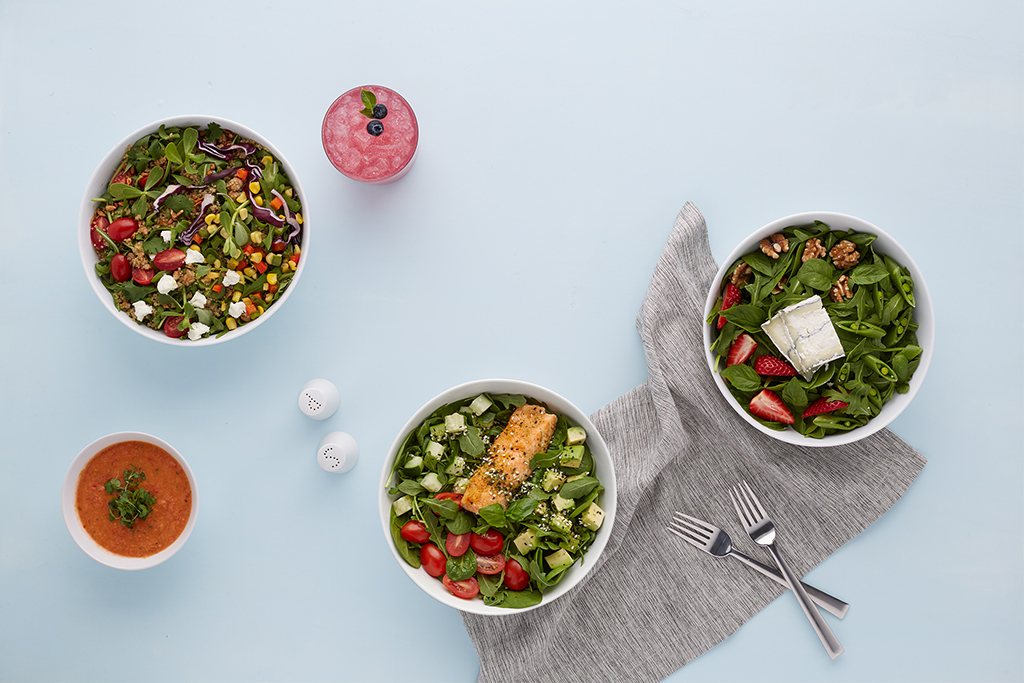 As for the term “lifestyle brand,” yeah, that’s a thing that marketers say. The restaurant chain that comes to mind when I think of that term is Sweetgreen. The chain focused on local, seasonal, ethically sourced ingredients has struck a resonant chord with its customers through a strong social media presence and, until last year, the music-oriented SweetLife festival, appealing in multiple ways to its demographic of socially conscious Millennials who can afford $14 salads.

I think in the current environment of cultural touchiness, declaring who your target audience is might open you up for criticism from people who think they’ve been slighted, ignored or pandered to. A more nuanced approach would be for restaurateurs simply to say what they do — what they’re serving, in what setting, at what price — honestly and sincerely, and see who they appeal to.

It’s possible that the wealthy octogenarians in their neighborhood like posting selfies of themselves drinking rosé, too.