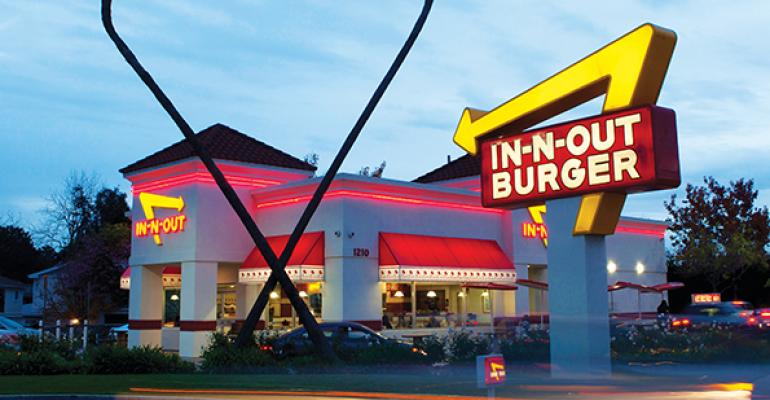 <p>In-N-Out, which has 300 locations in the West and Southwest, has a cult following, even outside the areas where it operates. Its vocal fan base includes Hollywood stars and industry luminaries like chef Thomas Keller.</p>
Data & Research>Consumer Picks

The family-owned brand won consumer’s hearts and did so at a time when limited-service restaurants have struggled to keep their heads above water. Visits were down three percent in the segment overall in 2014, resulting in more than 370 million lost visits, according to Port Washington, N.Y.-based research firm The NPD Group.

In-N-Out has continued to excel where larger, more ubiquitous brands have faltered. It manages to tally accolades from high-end chefs and celebrities alike. And it has remained true to its core beliefs and vision during the past 67 years.

“The key to their success has been a strong focus on their menu and daypart,” said Darren Tristano, executive vice president at Chicago-based Technomic Inc. “Since the 1940s, they have focused on burgers and French fries for lunch and dinner, while other burger brands have offered breakfast, chicken and salads.”

That niche focus is as evident in 2015 as it was when the chain was founded. The menu, which consists of a handful of variations on the brand’s classic burger, along with house-made French fries, shakes and soft drinks, remains simple and has kept consumers coming back over decades of trends, economic ups and downs ,and changing American tastes.

“They are an icon in their own right,” said Bonnie Riggs, restaurant industry analyst at The NPD Group. “They do what they do and they do it very well, and they have not overly complicated their menu.”

Founded in 1948 in Baldwin, Calif. by Harry and Esther Snyder, In-N-Out was the first drive-thru burger stand in the state and began with what remains two of its key differentiators: fresh ingredients and impeccable customer service. Harry personally picked the meat and produce daily from local butchers and markets, preparing everything from scratch as his wife Esther managed the books.

The same year, taking to the garage after a day frying up burgers, Harry developed and introduced a two-way speaker system that allowed the Snyders’ customers to order and receive their food without ever having to leave their cars.

Close to seven decades after those humble beginnings, the company, which has grown to 300 locations in California, Arizona, Nevada, Utah and Texas and is worth upwards of $1 billion, has become one of the most beloved brands in the country.

“They have a very loyal following,” Riggs said. “All you hear everybody say when you are going to the West Coast is, ‘You have to go to In-N-Out.’”

And when Riggs says everybody, she means everybody. The brand has been lauded by Hollywood celebrities — stars ranging from Miley Cyrus to Oscar-winning director Ang Lee — as well as restaurant industry heavyweights like Anthony Bourdain and Thomas Keller.

Earlier this year, Bourdain, the famously outspoken foodie and host of CNN’s Parts Unknown and ABC’s The Taste was featured in a video, breaking down what makes In-N-Out’s burger so special. He went so far as to call the burger joint his
favorite restaurant in Los Angeles and, “the only fast-food restaurant I like and think is good for the world.”

Similarly, Thomas Keller, celebrity chef and restaurateur of Yountville, Calif.’s celebrated French Laundry has been effusive about his love for the burger brand over the years, telling the Food GPS blog that if he didn’t routinely skip lunch due to his busy schedule he would “probably go to In-N-Out Burger.”  He said the chain has “always had a real special place in my heart.”

And while Keller has openly discussed his desire to open a burger restaurant — citing In-N-Out as a chief inspiration — other key industry leaders have gone on to do just that.

In an interview with Los Angeles Magazine in 2012, Adam Fleischman, founder of trendy Los Angeles-based Umami Burger, gushed about his love for In-N-Out, the brand that inspired him to start a burger chain.

“When I was at Burger King, we sent a team out to California to learn about the cult chain called In-N-Out,” he recalled.  “At first glance, we couldn’t figure out why it was so successful.  After all, they fried their burgers, while Burger King flame-broiled, and the speed of service was slow versus our standard of three minutes or less.”

However, after a few visits, the brand’s success became abundantly clear to Clayton.

“In-N-Out simply does a better job across the board, and they are being rewarded for doing a good job,” he said.  “Better execution always wins, and it’s not easy to do.  They execute flawlessly — good food, friendly service, clean restaurants and a great price."

Even industry veteran Danny Meyer hasn’t shied away from expressing his admiration for the food and the vision of the Snyders. The owner and founder of fine-dining powerhouse Union Square Hospitality, as well as the newly public Shake Shack, told BuzzFeed that a trip to the West Coast almost always means a stop at In-N-Out.

Remarkable, considering that the two chains are often the topic of debate between East and West coasters as to whose burger is better.

In-N-Out continues to compel almost everyone who has ever eaten one of its burgers, and even a large portion of those that haven’t, to join the fan base.

In this year’s Consumer Picks survey, the brand ranked highest with consumers among Limited Service hamburger chains in terms of Food Quality, Value, Cleanliness, Service, Reputation, Craveability, Likely to Recommend and Likely to Return — making it the overall favorite in the segment.

In addition to meeting, and often exceeding, consumer expectations, Technomic’s Tristano noted that adhering to the Snyders’ original vision is paramount to the company’s current success.

“Fierce loyalty does not come easily or quickly,” Tristano said. “Their ‘Animal Style’ burger has been served for over 50 years and they have stayed true to their preparation methods with fresh-never-frozen burgers, hand-leafed lettuce and real American cheese. Their consistent practices have become today’s major trends in real food.”

The “Animal Style” burger mentioned by Tristano is arguably the chain’s most famous item, and the one that can be seen being devoured by Bourdain in his video love letter.  Available on In-N-Out’s “secret menu,” the “Animal Style” is a mustard-grilled beef patty with lettuce and tomato, with additional options of an extra patty — to make the signature Double Double — pickles, cheese and grilled onions. The “Animal Style” burger is one of the many features of In-N-Out that hasn’t changed over the years.

Since Harry and Esther served up their first burger, In-N-Out has remained an almost exclusively family-owned business. Mark Taylor, the only non-blood relative to serve as its president, is the sole exception. The chain has never franchised and has made a point to grow with caution, putting quality food and good customer service at the top of the priority list, instead of maximum number of units.

Today, the Snyder’s granddaughter Lynsi serves as president, a position the 32-year-old has held since 2010. Lynsi Snyder will assume full ownership of the company when she turns 35 in 2017.

“Because the market is not growing, many quick-service restaurants have tried to emulate fast casual by increasing the menu,” Riggs said. “Instead, they have complicated things, slowed down service and, operationally, made things very
difficult.”

In-N-Out, on the other hand, has kept its menu short and sweet, and has — unlike many of its competitors — never offered breakfast.

Even when a petition on Change.org from consumers who wanted to see a veggie burger added to the menu made headlines, the brand didn’t budge. Veggie burgers, chicken and other common quick-service offerings remain absent from their menu.

The company has also remained famously press shy — executives declined to speak with Nation’s Restaurant News for this story — and have largely opted for more word-of-mouth marketing techniques such as their successful use of roadside billboards and bumper stickers, in lieu of big budget media campaigns.

For In-N-Out, the food and its fans have always spoken for themselves.

While the brand has staunchly resisted franchising throughout its history and there are no signs that fans will see anything akin to the recent $1.8 billion IPO of Meyers’ Shake Shack in the near future, at 300 units strong, it is not opposed to growth, as long as it is on its own terms.

So what does that mean for “Animal Style” fanatics who may worry expansion equals a decline in quality, and who — like Bourdain — hold the brand at a level that towers above the big limited-service chains like McDonald’s, Burger King and Wendy’s?

According to Tristano, there is little reason for concern.

“The brand’s popularity will continue to grow as it expands,” he said. “Slow cautious growth will provide a strong demand for a product that has not tried too hard to build its system through expansion and as long as it stays true to its roots and beliefs, there is no reason to think In-N-Out will lose favor with its customers.