Panera was founded in 1987 as the St. Louis Bread Company (and still operates under that name in the St. Louis area) and is known for its sourdough bread made from the same “mother” yeast starter since the beginning, soups, salads, and sandwiches. In 1993, the company was bought by Au Bon Pain, which changed the name to Panera in 1997. In 1999, Au Bon Pain and its subsidiaries were sold to a private equity firm, and finally, JAB Holding Company acquired Panera Bread in 2017.

The restaurant has become known for its “clean” and simple ingredients over the years, distinguishing itself from other restaurant chains by publishing a “no-no list” of artificial additives that would never be found in its food in 2014.

In 2019, Panera expanded into a new daypart — dinner — and began offering dinner bowls, and later flatbread pizzas and wine and beer, the latter of which Panera began testing in select markets in 2020. The chain also rolled out a coffee subscription program at the start of 2020.

During the pandemic, Panera invested heavily in digital convenience technologies which gave them a leg-up during the challenging days of dining room lockdowns. 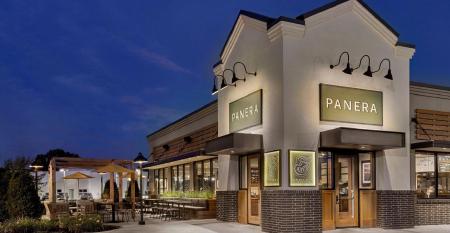 Panera Bread announces contactless dine-in for guests
Feb 01, 2022
Guests can order on their devices when they arrive, know when their order is ready and pick it up —all without interacting with another human being