Jack in the Box is a quick-service burger chain known for its signature drive-thru marker with its clown head based on the toy after which the restaurant is named, as well as its diverse menu that has long included all-day breakfast and, in many locations, tacos.

The chain’s “Tiny Tacos,” introduced early in the novel coronavirus pandemic, were among the menu innovations that contributed to incremental sales and higher checks that have given the chain record-breaking sales throughout 2020 and 2021.

In recent years the company had been bogged down in a lawsuit by franchisees who in 2018 sued the parent company for, among other things, lack of direction. Since then the chain’s former CEO Leonard Comma was removed and replaced by Darin Harris who has rebuilt the executive team and restored relations with franchisees.

Jack in the Box was founded in 1951 by Robert O. Peterson in San Diego, where the chain is still headquartered. 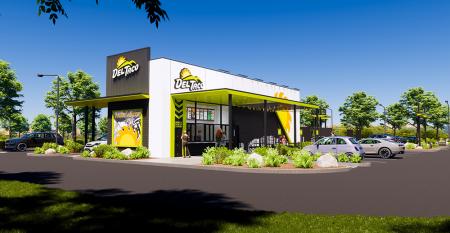 Jack in the Box sees positive same-store sales growth for quarter
Feb 23, 2022
The quick-service brand added 98 new franchise agreements to the pipeline during the start of the fiscal year

NRN editors discuss the sale of Del Taco to Jack in the Box, New York City’s vaccine requirement for workers and Christmastime
Dec 10, 2021
Plus, hear from football star Victor Cruz about his new investment in restaurant chain Krystal

Sports stars rush to work with restaurants
Nov 23, 2021
See the athletes partnering with chains for marketing and brand creation

NRN editors discuss Hurricane Ida, recent IPOs and how vaccine mandates impact the restaurant industry
Sep 10, 2021
Plus, hear from Jack in the Box CEO Darin Harris on buying back units and the future of the company