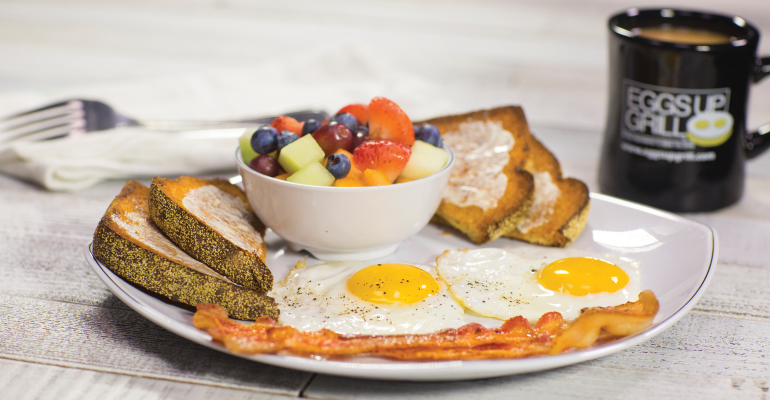 Waking up to franchise opportunity

The booming breakfast market offers a win-win proposition for both consumers and growing companies. Diners love the chance to elevate the morning meal into a dining occasion, and franchisees are drawn to the shorter workday and simplicity of operations.

While sitting down to breakfast used to be a weekend activity or an occasional work-related meeting, demographic shifts and changes in the way people work and eat have created opportunities for franchised breakfast concepts to expand.

According to The NPD Group, breakfast is a stable part of people’s routines, as they eat the meal 299 days of the year. Yet only 22% of breakfasts are eaten outside the home, meaning restaurants have a significant runway for growth.

For many consumers, breakfast is more than a quick bite during a commute or at a desk. Even during the week, people are sitting down to enjoy high quality, even upscale breakfasts.

“Breakfast is not only the most traditional meal, but it's also the most consumed meal,” said Robert Maynard, CEO and founder of Davidson, S.C.-based Famous Toastery. “As food has evolved, so have breakfast spots.”

Famous Toastery, which has locations along the East Coast, serves a variety of egg sandwiches, breakfast burritos, flapjacks and variations on the classic Eggs Benedict. It also has a wine and cocktail menu.

“We started in New Orleans, where weekday brunch and cocktails go hand in glove,” said Clay Carson, vice president of franchise sales and real estate for Orlando, Fla.-based Another Broken Egg. “We gave people a reason to have a Bloody Mary and crawfish on a Tuesday.”

Twenty years ago, Carson said, the only operators that were offering brunch were hotels, and people went for special occasions like Mother’s Day. “Then the higher end casual dining places saw such a need for it that they said, ‘Why don’t we do this all the time?”

Consumer interest has grown, too. According to research from Mintel, younger diners, particularly Millennials continue to be top breakfast/brunch diners and have a great deal of spending power. Shifts in the ways younger consumers work have also contributed to breakfast growth, as they may not commute to traditional nine-to-five office jobs.

“From a lifestyle standpoint you think of the number of freelancers, consultants, and in the corporate environment, flexible schedules,” said Ricky Richardson, CEO of Spartanburg, S.C.-based Eggs Up Grill. “That creates an opportunity to put together different dayparts than formal lunch or formal dinner.”

In addition to the growth potential of breakfast market, franchisees are also drawn to breakfast concepts to for their attractive business model, which includes simpler menus, shorter workdays and decreased liability around alcohol service.

Perhaps the biggest of those benefits is shorter working hours, a quality-of-life benefit that can help attract talented franchisees.

“With a better breakfast restaurant, you can work from 7 a.m. to 3 p.m. and be home by 4:30 p.m.,” Maynard of Famous Toastery said. “Other restaurants have to run two to three shifts a day and with breakfast spots, there's only need for one shift a day.”

Breakfast is also attractive to franchise groups who own lunch and dinner brands and want to balance their portfolios. Sometimes these owners can move workers from one concept to another.

Breakfast menus offer franchisees another benefit, which is the simplicity of the operational model. The prep work is more streamlined than in a restaurant that has a broader menu, so cook-to-order is simple, said Richardson of Eggs Up Grill. That also means less equipment, which leads to lower costs and less maintenance.

“Obviously the heart of all breakfasts is the flat top grill,” he said. “You might have a waffle iron, but not an open flame charbroil, and not a large oven space.”

That simplicity has made the 35-unit Eggs Up Grill attractive to owners who are new to the restaurant franchise world. In fact, Richardson said, 70 percent of franchisees did not previously have restaurant industry experience.

Another benefit is that by limiting the menu to high-margin brunch cocktails, or even no cocktails, owners can help decrease their exposure to alcohol-related liability issues.

For Sunny Street Café, a 24-location chain based in Columbus, Ohio, that means creating a family-friendly atmosphere with dinosaur-shaped pancakes and only non-alcoholic beverages.

“If you’re managing alcohol, it’s a high inventory item you’re spending more money on,” said Mike Stasko, vice president of brand strategy for Sunny Street Café. “You have to worry about staff, the liability of overserving guests and the liquor license.”

But even brands that offer brunch cocktails or spiked coffees may be able to avoid some of the pitfalls of alcohol service, as people are generally less likely to overindulge during the day than at dinner or in late-night periods.

Finally, the operating hours of breakfast and brunch concepts are attractive not only to franchisees, but to workers.

“In an industry where we’re seeing rising HR costs, you can run one shift instead of multiple shifts,” Carson said. He adds that many of the Another Broken Egg servers drop off their kids at school, work breakfast and lunch, then pick up their kids after school. “From an HR perspective there is less turnover and happier employees. They are making as much money if not more.”

One challenge, he noted, is that the shorter workday also means a smaller window of high profit, high-volume service.

“You have to be very proficient about turning tables,” Carson said. “You have to get people in and out in a methodical way.”