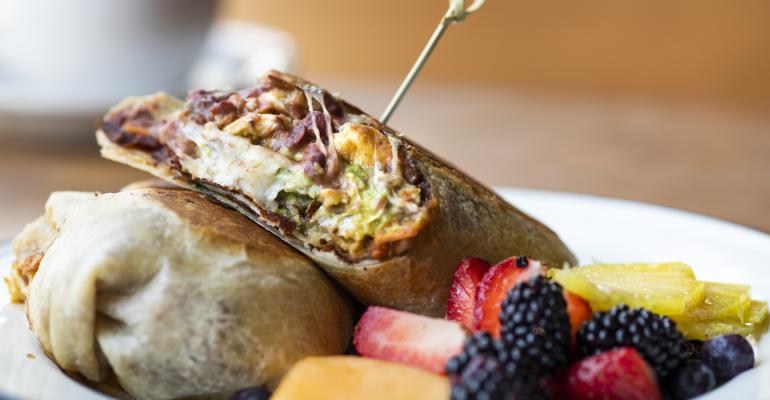 Tapping into the power of plant-based meals

Restaurants are tapping into a growing population of vegetarians and vegans — as well as those who abstain from meat some of the time — with color and flavorful plant-based breakfast and brunch options.

Chorizo-spiced cauliflower breakfast tacos, and sweet potato breakfast skillets and other vegetable-forward dishes are helping to drive incremental sales by speaking to customers who are reducing their meat consumption and adding more vegetables, for the sake of health or the environment or simply because they are delicious.

For restaurants, attracting these patrons to breakfast and brunch tables is good business. It goes beyond serving the small number of people who are vegan, vegetarian or flexitarian eaters. Just 13% of U.S. consumers pursue those three eating approaches, according to market research first The Hartman Group. However, a much larger portion of the population is open to eating meat-free on occasion or letting meat play a supporting role in a vegetable-driven dish.

Nontraditional breakfast proteins such as vegan bacon and plant-based breakfast sandwiches are the top two trends in breakfast, according to the National Restaurant Association 2022 What’s Hot Culinary Forecast, and restaurant chains are tapping into a growing market of alternative proteins and vegan dairy products to ride the wave.

Family-dining chain Cracker Barrel Old Country Store, for example, invited guests this summer to try its first plant-based meat analogue, billed in a company news release as “the Impossible Sausage Patty Made from Plants,” in a new Build Your Own Homestyle Breakfast offering.

At Socalo, a SoCal-Mexican restaurant in Santa Monica, Calif., from chef-owners Susan Feniger and Mary Sue Milliken, chefs use Impossible plant-based meat as a base to craft their own plant-based chorizo.

“We add our chorizo spice mix, which has cumin, ground chipotle, a little ground ancho, smoked paprika and caramelized onion and it’s really delicious,” Feniger said. “It gives you a different vehicle for flavors and textures than using, say, mushrooms as a variation.”

Feniger and Milliken are longtime proponents of eating in way that puts vegetables at the forefront.

“We’ve always made sure our plates are filled with vegetables,” Feniger said. “Honestly, for like 40 years, going back to our first days at Border Grill, we've done an 80/20 plate with the 20% being protein.”

“People who are vegan or veggie are saying, ‘We live in California. Give me great vegetables from the farmers market,’” Feniger said.

Vegetables in a starring role

At First Watch, a Bradenton, Fla.-based breakfast, brunch and lunch chain with more than 445 units, there is an ample selection of dishes centered on vegetables, grains and lean meats prepared with chef-inspired flair. But to date, the brand has not menued a plant-based meat analogue.

“We took a stand early on that we would watch this,” Shane Schaibly said, corporate chef and senior vice president of culinary strategy at First Watch. “We’re going to learn about it and taste it and cook with it. But we really believe more in plant-based items that actually grow in the ground. And that's where we hang our hat.”

Representing First Watch’s approach are egg-white omelets, like the Healthy Turkey, made with roasted onions, tomatoes, spinach and feta, and the Tri-Athlete, with roasted cremini mushrooms, onions, tomatoes and green chilies. Fresh avocados are prominent as a component of Farm Stand Breakfast Tacos, Farmhouse Hash and the Elevated Egg Sandwich as well as on avocado toast.

Sustainability in the spotlight

On America’s college and university campuses, the current generation of students is arguably more mindful of sustainable living and healthful eating than any that has come before. With that clientele in mind, as well as those of its other business segments, Aramark became the first contract U.S. foodservice company to sign the World Resources Institute Cool Food Pledge this year. This is a commitment to reduce the greenhouse gas emissions associated with the food it serves in the U.S. by 25% by 2030.

The company began placing the Cool Food Meals badge on select menu items in Aramark Collegiate Hospitality dining halls beginning with a pilot project at 10 universities during the spring 2022 semester. Now there are 19 campuses in the program and plans to expand the availability of the menu items to 1,500 Aramark locations in the U.S.

Although Cool Food Meals addresses all dayparts, breakfast is an especially significant one. “Breakfast is our first interaction with students of the day,” said Kevin Kebea, director of product development and menu innovation at Aramark. “It is very important for us to start the educational process for Cool Foods and communicate that this can be part of your lifestyle and decision making at meals.”

“We know there are people who care about the environment who may not participate in a vegan diet all the time,” Kebea said. “But they know that if they make different choices occasionally it can go a long way. And we’re seeing that, for sure.”

Meat eaters get in on the act

Even in restaurants that cater to meat lovers, plant-forward creations are elbowing their way onto the menu.

On the brunch menu of The Dearborn, an urban tavern in Chicago known for sophisticated American cooking, vegetable-topped, thin-crust pizzas and salads composed with fresh greens such as arugula, tatsoi and frisée and fruits like greengage plums counterbalance indulgent items such as Short Rib Waffle Benedict and Hash Browns with Duck Gravy.

“We always want a handful of things on the menu that speak to plant-forward, plant-based eaters,” said executive chef Aaron Cuschieri. Mushrooms often figure in such dishes because “they are something that non-vegetarians will eat.”

However, even healthy eaters may make brunch their “cheat meal” of the week, Cuschieri said.

“At brunch they have no problem breaking the great habits they keep most of the time, because they're going out with friends and enjoying themselves.”

Another Windy City establishment, the upscale-casual restaurant Wood, has a following for house-butchered meats, reflected in hearty brunch items such as a double cheeseburger, BBQ brisket and steak and eggs.

“Overall, our menu is very driven by the butcher program we do,” said executive chef Devin Kreller.

Yet he also has appealing options for patrons whose idea of brunch includes fresh produce and greens. For instance, the Summer Omelette sports fresh corn, roasted tomato, zucchini, goat cheese and basil and comes with a mixed green salad. Also in play is a Truffle Grilled Cheese and Egg sandwich, made with brioche, Gruyère, truffle butter, arugula salad, truffle vinaigrette and a sunny side up egg.