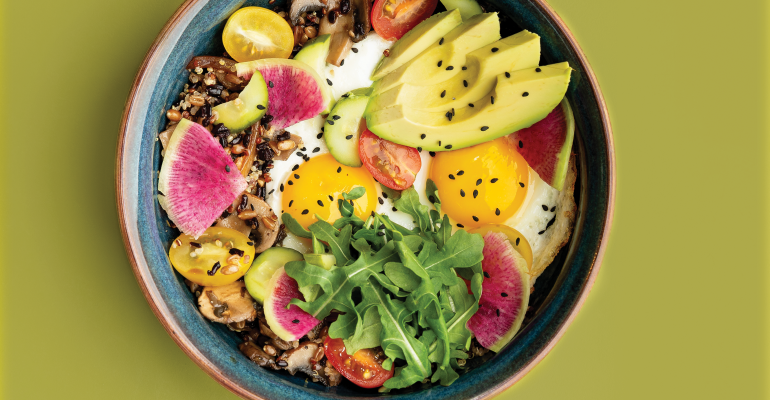 For a growing number of consumers, the best way to start the day is with plant-based foods. Whether they are looking for a morning meal that is vegan or merely veggie-centric, these diners want something that doesn’t contain animal products and doesn’t compromise on taste. Restaurants are responding by developing menu items featuring meat substitutes, promoting protein-rich grains bowls and a choice of nondairy milks.

Plant-focused dining has been top of mind for months with new vegetarian and vegan dishes popping up on menus at a steady clip. Now this juggernaut of a trend is making its way into the morning meal. A number of major restaurant chains, including Dunkin’, Tim Hortons and others have recently made high profile announcements about new breakfast menu items featuring meat alternatives from the two main players in the plant-based meat market, Beyond Meat and Impossible Foods.

The rise of flexitarians — those who eat both meat and plant-based meals — has driven the growth and helped plant-based products appeal to a wider audience. For example, according to Nielsen research, 21.6% of U.S. households are purchasing meat alternatives, up 1.6% from last year.

Rise of the flexitarian

“They were leaving dollars on the table,” he said. “People wouldn’t go because one member of the group would have no plant-based options.”

The plant-based protein trend is also notable for the rapid adoption it has seen, Shaibly said.

“They have not been around that long,” he said. “You would want something to be a trend a long time, and cycle through independent restaurants, fine dining, then chains. This is blasting everywhere.”

For its part, the breakfast and lunch-focused First Watch has always offered plant-based items such as its brown rice veggie burger. Top-selling plant-based breakfast items include the avocado toast and the A.M. Superfoods Bowl, a coconut milk chia seed pudding with bananas, berries, blackberry preserves, and house-made granola

How you market such dishes matters, as some terms can be alienating for meat lovers or those who are new to plant-based eating, Schaibly said. First Watch, for example, uses the term “veggie centric” instead of plant-based.

The bigger trend at work here is health and wellness, operators say.

“There is a broader revolution that’s happening,” said Andrew Jaffe, chief marketing officer of Denver-based Snooze an AM Eatery. “People’s value systems are influencing how they’re thinking about and how they engage with food. That’s why you’re seeing a lot of a plant-based food.”

“That creates a more inclusive environment,” Jaffe said. “It allows people to meet the needs of their particular lifestyles or diets.”

At J. Selby's in St. Paul, Minn., the entire menu is plant-based. While the Sunday brunch menu includes items with plant-based sausage or mushroom “bacun,” there are also items that don’t attempt to duplicate the flavors or textures of meat. Those include Avocado Toast, with seasoned avocado spread, tomatoes, pickled onions and hemp seeds on sourdough.

“One of the things we’ve been talking about is, is it time for us to start backing away from some of the meat analogs,” said owner Matt Clayton. “They’re all being done to death and by everyone.”

“One is the basic vegan or vegetarian, people that have been that way a long time and are looking for a place to eat,” he said. “Then there is the other group, which is people who are brand new to plant-based eating, or they heard it’s better for them and better for the environment, and they want to try it.”

Younger consumers are especially interested in plant-based dining, he added.

Generation Z consumers are also interested in nondairy milks. According to a 2018 report from Mintel, Gen Z has positive associations with non-dairy milks but do not feel as strongly toward dairy milk. Only 37% of Gen Z consumers who buy dairy milk associate it with being nutritious.

Consumers of all ages are consuming dairy milk much less frequently than years past, according to Mintel. Total sales of dairy milk are forecast to reach $13.7 billion by 2023, which would be a 13% decrease from 2018. Of those who are buying less dairy milk, 56% are drinking more non-dairy milk, because they perceive non-dairy milk as being better for digestion.

“We are big fans of cheese that isn’t cheese, eggs that aren’t eggs, plant-based yogurts and cream cheeses,” Morasco said.

This year Veggie Grill introduced breakfast at two of its California locations.

“Our guests have been asking us for a breakfast/brunch offering for a while now,” said Veggie Grill’s CEO Steve Heeley. “There are very few craveable 100% plant-based breakfast offerings on the market, so we’re thrilled to offer our guests more mindful versions of innovative breakfast offerings, as well as traditional breakfast dishes.”