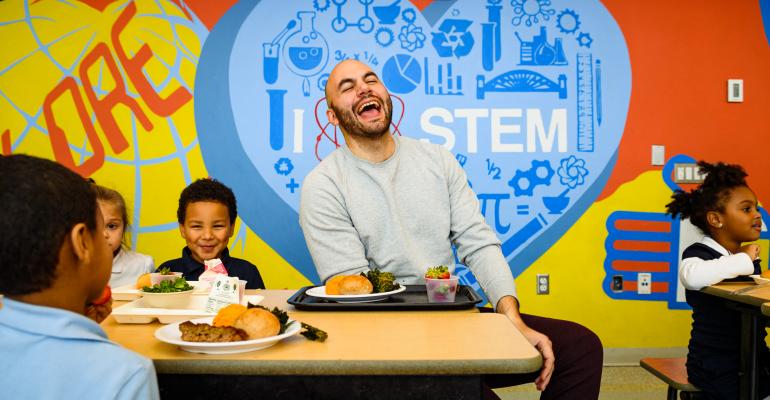 Pleasing kids is a must for foodservice operators who serve families due to the outsized influence youngsters have on dining decisions.

As the restaurant industry struggles to reopen amid a public health crisis that has decimated traffic and made consumers ponder the safety of eating away from home, understanding what kids want at specific mealtimes may be an important step on the path to recovery.

One school of thought about developing kid-friendly menus holds that young diners are content to eat the same items their parents do, just in smaller portions. Another holds that cuteness, whimsy and miniaturization are the keys to appealing to kids. Both viewpoints have currency.

At Cracker Barrel Old Country Store, for example, research shows that children’s visits to the family-dining restaurant correlate with their customer frequency and brand affinity as adults, reports Cammie Spillyards-Schaefer, vice president of culinary and menu strategy at the Lebanon, Tenn.-based chain. “So it’s very important for us to grow visits with kids and have them love the brand,” said Spillyards-Schaefer.

In August, Cracker Barrel introduced a new kids’ menu informed by insights from focus group testing with kids and their moms. “We found through our re-search and talking to kids that they want more items that are interactive,” said Spillyards-Schaefer.

An example is the new Mini Confetti Pancakes, featuring three mini pancakes filled with fruity cereal, which adds flavor, texture and visual appeal. And because kids enjoy manipulating food, a ramekin of syrup is served alongside for dipping.

“That adds a great deal of interaction to a dish that used to be eaten with a fork and knife,” said Spillyards-Schaefer. It replaced the single, grownup-sized pancake on the previous kids’ menu.

Two new egg-and-biscuit breakfast items also have joined the kids’ menu: Scrambled Egg n’ Biscuit and Biscuit Breakfast Sandwich, the latter with a choice of sausage or bacon and scrambled egg. Each is served with crispy, disk-shaped potatoes, a new potato side for Cracker Barrel.

Also in play for kids at Cracker Barrel are milk-flavoring drinking straws, which make a glass of plain white milk taste like cookies and cream. Flavor beads inside the straw transfer the flavor as the milk is drawn through.

“Again, this adds fun and whimsy and interaction,” said Spillyards-Schaefer. “The kids are drinking milk, so mom’s happy, and the kids are getting a little more excitement.”

Friendly’s, the Wilbraham, Mass.-based family-dining chain, has had its share of kids’ menu hits over the years, notably the Tie-Dyed Pancake with M&Ms, an iconic offering. But it too has felt the need to re-fresh its kids’ menu.

Last summer, Friendly’s convened a kids’ menu focus group in preparation for a new kids’ menu in January. However, that rollout was essentially curtailed in late March when most of the chain’s locations stopped opening for breakfast. Nevertheless, thanks to the focus group insights, Friendly’s officials have a clearer under-standing of what kids want and some promising, kid-approved breakfast menu ideas waiting in the wings.

The Friendly’s focus group, consisting of day campers aged 8 to 11 years old, sampled prospective new meal concepts and desserts. With breakfast, one key insight was that kids preferred a cheese omelet that resembles a typical grown-up’s omelet over a kids’ plate of eggs cooked any style.

“They’re easier for kids to handle and it adds an element of fun,” said Gillian Begin, brand and research manager at parent company FIC Restaurants Inc.

Kids’ input also led to the deletion of a menu item: the kids’ egg white sandwich. “We wanted to open up that spot for something that would be a little more fun and have some news,” said Begin.

Arguably, no operators understand kids’ food likes and dislikes better than K-12 school foodservice directors. Of course, in contrast to commercial restaurant operators, they face unique challenges such as minuscule budgets, mandatory nutritional regulations and brief service periods. Their job is made more complex and uncertain by the new health and safety requirements of serving school food during the pandemic.

However, school foodservice insiders say that kids are open to food that is higher in quality and more nourishing and varied. But to gain acceptance, it is imperative to introduce them to new foods gradually and in the context of comforting familiarity.

“We have found it very successful to make sure there are always food items that they’re comfortable with and enjoy, and from there push the envelope,” said Dan Giusti, founder and CEO of Brigaid, a New London, Conn.-based company that consults with school districts on improving school food. Nevertheless, kids can be finicky about foods they have not seen before.

Of course, not every school even has sufficient labor, space and equipment to run a breakfast program in addition to the heavy demands of school lunch. But for those who make breakfast work, the payoff can be kids who are better nourished and a school atmosphere that is more positive.

“I always love to go into the cafeteria when we're serving breakfast in the morning because it's a very different environment,” said Giusti. “It’s very quiet compared to the typical raucous lunch period. Most of the kids are there to eat and that’s important to them.”

Kids recognize and appreciate quality when they see it, smell it and taste it, Giusti said. Take the chocolate-banana and blueberry muffins in Brigaid school cafeterias.

“It’s the idea that something is being baked in the morning,” said Giusti. “You can smell it throughout the school. There's no question that the kids really appreciate that someone came in very early to ensure that this fresh-baked item was made.”

At New London Public Schools, Brigaid’s original partner district, the main concern these days is mastering the new logistics of school food during a pandemic. The opening plan for the school year was to have kids attend classes in school two days a week and have instruction at home the other days. Package meals are handed out on bus routes and for students to carry back to eat on their days at home.

But the mission of introducing kids to new and better foods goes on. “It definitely takes time to encourage kids to try new things,” said Samantha Wilson, child nutrition program director at New London Public Schools. “Slowly but surely you see kids eat the hot entree or vegetable or whatever you are serving.”

There have been successes. Crispy kale chips, made by rubbing the greens with oil and salt and baking them, have a following, as do kale Caesar salad and to a lesser extent, berry and kale breakfast smoothies. Kids eat broccoli, steamed and dressed with garlic confit, more than the plain broccoli served before the Brigaid chef arrived.

“Really, nothing’s off the table, you know,” said Wilson. “It’s just a matter of what we can prepare in a relatively brief time to feed a lot of kids.”

One new item that looked promising, but was not widely popular, was a scratch-made vegetable frittata made with spinach, potato and cheese. “It was actually super tasty, but the appearance was different from what they were used to,” said Giusti.

If such a frittata was offered a few more times for breakfast, maybe introduced with a low-key sales pitch from cafeteria staff, it just might catch on more.

“You could take some time to sit down with the kids and just say, ‘Hey, give this a shot,’’’ said Giusti.