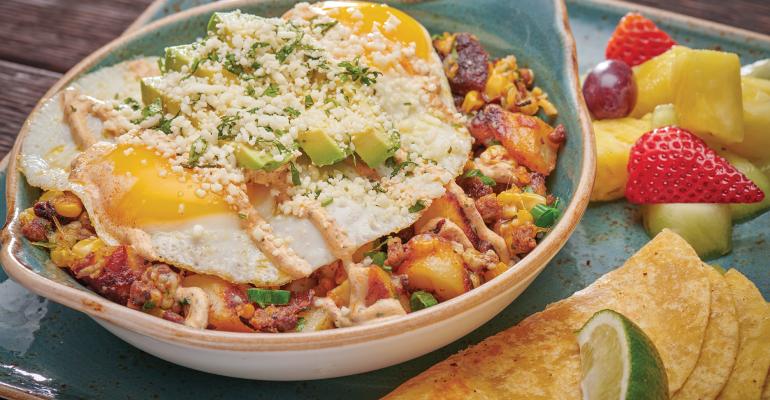 Hispanic-inspired flavors, ingredients and techniques are reshaping the way America eats, especially at breakfast. It’s happening in ways subtle and bold, shown in everything from pancakes gilded with luscious vanilla and caramel sauces to omelets and eggs benedicts jazzed up with tongue-tingling chiles.

At the heart of the trend is the growing presence, buying power and cultural influence of Hispanic people in America. A new report on breakfast food trends by the market research firm Packaged Facts notes that Hispanics are among the nation’s most influential “breakfast believers” — consumers who believe breakfast is superior to other meals. Their influence is significant and growing, given their numbers, now pegged at more than 60 million in 2018, or almost 19 percent of the U.S. population, and expected growth rate of 9 percent through 2020. Their taste for breakfast dishes “with Hispanic sabor,” as Packaged Facts puts it, is rubbing off on consumers in general, including “ravenous Millennials looking for what’s next.”

In a relatively short time, Hispanic flavors have come a long way on menus. “We didn’t see chipotle peppers seven years ago and now they are everywhere,” says Jason Knoll, vice president of culinary at Another Broken Egg Café, a breakfast, lunch and brunch chain based in Miramar Beach, Fla. “Now we are understanding how incredibly fresh and flavorful Hispanic ingredients can be. I think we will see more usage of peppers and tomatillos and we will increasingly associate Hispanic cuisines with freshness.”

Other go-to ingredients for Knoll are green chiles, which he says are particularly good with eggs, guajillo chiles, which add authentic flavor to dishes like chilaquiles and fresh cilantro, “the perfect fresh finishing” for many dishes.

Items with flavors like those have steadily increased in purchase volume, especially in the last three years, Knoll says. Menu mainstays at Another Broken Egg Café include Huevos Rancheros, made with crispy flour tortillas, black beans, green chilies, onions over-medium eggs, cheese and cilantro and the Hey Lucy! Omelette, which contains breakfast chorizo, onions and green chilies and is topped with cheese and avocado.

“Hispanic flavors are permeating more and more menus,” says John Dillion, senior vice president and chief marketing officer at Denny’s, the Spartanburg, S.C.-based family dining chain. “For us, leaning into Hispanic flavors that are more mainstream is our strategy.”

“We like to say that we keep one foot in the known and one foot in some adventure,” says Dillon. “It’s the idea of safe adventure, with a platform like pancakes at the breakfast occasion.”

Operators agree that customers across the country, not just those who live in regions with a Hispanic heritage, are showing greater interest in this style of eating. “We have found that guests of all backgrounds, all locations, all ethnicities, are really enjoying more and more Hispanic flavors, and bolder flavors overall,” says Dillon.

Tres Leches Pancakes at IHOP, the Glendale, Calif.-based family dining chain, are the top seller of its line of International Pancakes. “It used to be that you would see flavors like those do really well on the West Coast and the East Coast,” says Alisa Gmelich, vice president of marketing. “Now we are seeing the proliferation of all kinds of these foods across the country.”

“When you think of it, just the name Tres Leches might be very new and different for many people,” says Gmelich. “But today, all of these really interesting flavors, namely the Hispanic ones, are resonating with people everywhere.”

Another Broken Egg Café has scored on the sweet side with Hispanic-inspired, limited-time renditions of French toast. For instance, Churros French Toast is a take on churros, the traditional Hispanic donut-like snack, featuring battered toast coated with cinnamon sugar. Another example, Flan Stuffed French Toast, has a slice of flan, a Hispanic custard, inserted in the bread prior to dipping in batter and cooking. “It had a wonderful, oozy, creamy texture,” says Knoll.

Hispanic flavors are pleasing a broad public at First Watch Restaurants, a breakfast, brunch and lunch chain based in University Park, Fla. Mexican-inspired dishes like Elote Street Corn Hash, a summer LTO based on roasted corn tossed with potatoes, chorizo and eggs and Cornbread Carnitas Bowl, a piquant medley of seasoned pork, seasoned black beans and poached eggs over griddled cornbread, got high marks from customers.

“This is not something you only see in Florida or Texas or Arizona,” says Shane Schaibly, vice president of culinary strategy and corporate chef at First Watch. “It’s happening in all of our restaurants, from Philly to Alabama to West Virginia and everywhere in between.”

“You are seeing dishes like those on mainstream menus across the country,” says Schaibly. “Maybe five or seven or ten years ago they might have been scary. Now you can thank social media or the Food Network or certain Mexican restaurants for opening the door to Mexican food, and setting the stage for restaurants like ours to capitalize on it.”

A major factor in the rise of Hispanic and some other global cuisines is the consumer’s growing yen for heat on the palate. “I think as people are trying new foods from other cultures, the American palate is changing quite a bit,” says Gmelich. “This desire for more heat and flavor and spice and boldness is desired across the board.”

At Another Broken Egg Café, Chilaquiles are made with an authentic Mexican recipe that features guajillo chiles. The dish is made with tortillas cooked with guajillo sauce, along with chorizo, Jack cheese, two over-medium eggs, red onions, radishes, goat cheese, cilantro and lime.

It took a lot of hunting to secure a supply of guajillos, because they are not widely distributed, Knoll says. But it was worth it, “because you can’t replicate the true flavor without them,” he says.

Interest in Latin-American cuisine in the U.S. is getting “bigger and bigger,” says Sofia Sada Cervantes, lecturing instructor in culinary arts at The Culinary Institute of America in San Antonio, Texas, and a native of Mexico. “The reason Latin-American food has gotten so big is because I think people got a little fed up with European styles,” says Sada Cervantes. “They are turning to all the different chiles and herbs that they have not tasted before.”

Although Mexican influence is pervasive in San Antonio, Sada Cervantes points out that typical breakfast offerings in Mexico reach far beyond the familiar breakfast tacos of South Texas. For fast and tasty twists on standard breakfast fare, she suggests breakfast tortas, Mexican-style sandwiches built on crusty bolillo or telera rolls.

“People in Mexico waiting for the bus or the subway grab a torta for a fast and filling breakfast,” says Sada Cervantes. “You can fill them with anything, really.” Typical examples are eggs and chorizo, beans and cheese and cochinita pibil, pork braised in achiote sauce.

Breakfast staples at Rice Dining include variations of seasoned rice and beans and roasted or fried plantains and freshly made breakfast tacos. The later gain distinction by being served with fresh, authentic salsas that Rice Dining chefs make. “We roast the jalapenos, poblanos or whatever the pepper is and the tomatillos and tomatoes as well,” says Curet. “It is truly the roasted salsas and condiments that put them over the top.”