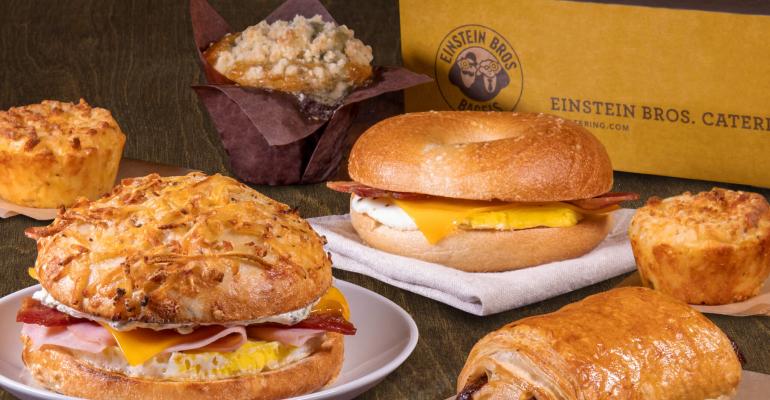 Breakfast concepts adapt to the disappearance of daily commuters

During the COVID-19 crisis, breakfast concepts struggled as consumers stopped commuting. Many workers set up home offices, others were laid off or furloughed, and people generally did not have to be anywhere first thing in the morning.

Consumers had little reason to leave their dining tables or couches when they had eggs and coffee. Plus their own Instagram-ready banana bread and sourdough was readily available at home.

According to a study from Stanford University, in June 42% of the U.S. labor force was working from home full-time, 33% was not working, and 26% — mostly essential service workers — were working on their business premises. The report noted that the new “work-from-home economy” is likely to continue long past the coronavirus pandemic.

As shelter-at-home orders were lifted, and people began to commute to work and school again, breakfast concepts were ready.

At Lakewood, Colo.-based Einstein Bros. Bagels, weekday sales were hit hardest because people weren’t going into work, and they weren’t stopping on the way to school or other morning activities.

The brand, part of the Coffee & Bagel Brands family, launched several initiatives to drive sales and visits. One was Everyday Brunch Specials, which feature some of the most popular menu items.

“We are seeing a shift in guests who were stopping into our bakeries around 7 a.m. on their way to work now coming in later in the morning,” said Alex Sterling, director of marketing for Einstein Bros. Bagels. “We believe that people who are working from home are getting their day going for a few hours and then heading out for a late breakfast or even brunch meal.”

These bundles come with a sandwich, twice-baked hash brown and chocolate croissant for dessert. “They are a great value for the guest looking for a substantial morning meal that would allow them to skip a traditional lunch,” Sterling said.

One factor that helped drive sales of Everyday Brunch Specials and the rest of the Einstein Bros. menu was that the brand had launched order ahead in its mobile app in February, before COVID-19 began to spread nationwide. Soon after the app launch, Einstein Bros. added curbside pickup, which Sterling said is continuing to grow.

With order ahead, customers can place an order and pick it up in-store or through curbside delivery, without having to complete a transaction with a cashier. To make the offer more appealing, customers who order ahead through the app receive free coffee.

“If our fresh-baked bagels aren’t draw enough, free hot or iced coffee should be,” Sterling said.

The Canton, Mass.-based brand announced the launch of Free Coffee Mondays and the return of Free Donut Fridays for members of the DD Perks Rewards Program, for three weeks in August. DD Perks members would receive a free medium cup of hot or iced coffee with the purchase of any Dunkin' food item. Dunkin's Free Donut Fridays, which ran in March and May, was also brought back for three weeks in August.

Dublin, Ohio-based Wendy’s relaunched its breakfast in early March, before the pandemic. To support the launch, the brand offered a free Honey Butter Chicken Biscuit with purchase via the Wendy's mobile app.

In February, St. Louis-based Panera Bread launched a coffee subscription service. For $8.99 a month, MyPanera rewards program users can get unlimited coffee, which translates to free-after-four coffees each month.

In May, the brand launched Panera Curbside, a geofence enabled, or location-based, service that notifies the bakery-café when the guest arrives to pick up the order. The launch was supported with an offer of $5 off any $20 order for the first two weeks of the new service.

Repositioning breakfast as a late-morning meal also worked for Uncooked, a fast-casual vegan eatery that opened in July in an office building in Chicago.

Breakfast sales are lower than what would be expected, co-founder Jeremy Jones said, because the 700 workers who would typically be working in the building are staying home.

To handle this challenge, Uncooked focused on its mission of providing healthful, plant-based food. The concept is one that appeals to a wider audience than people looking for a quick bite to eat at their desk.

“If we were just a typical breakfast place I think we would be suffering,” Jones said. “People aren’t eating breakfast out because it’s the easiest meal to cook at home.”

Instead of a morning rush, there are busy and less busy times over a few hours. People come in at 7 a.m., when Uncooked opens, and order coffee or a smoothie. Then, from 8 a.m. to 10 a.m., there is demand for early lunch or a large snack.

“The pandemic shifted people’s sleep habits,” Jones said. “For us the idea is how can we add value to the breakfast rush and still offer things they can’t make at home.”

The larger shift is that consumers, especially Millennials, are not maintaining the routine of eating three meals a day.

“The largest trend in health is the whole idea of intermittent fasting, which bucks the trend of eating breakfast anyway,” Jones said. “During the pandemic people are waking up at 10 a.m. and think they might as well fast through lunch.”

At Donut Distillery in Nashville, Tenn., owner Shauna McCoy shortened the workday when it became clear that customers were not going to come in first thing in the morning. Instead of being open from 7 a.m. to 5 p.m., the hours were changed to 8 a.m. to 3 p.m.

“We could stay open later and maybe get a few more customers,” McCoy said. “But the tricky part is, what’s the cost of business?”

One advantage to the shorter day is she can schedule the same people to open and close the place, instead of scheduling two shifts of workers. That saves on labor costs, and limits the amount of people working in the shop who can be exposed to the coronavirus.

Safety issues are making Donut Distillery’s drive-up window very attractive to customers. The window has always been available, but it is more popular than ever now. “The drive-up window was key for us,” McCoy said.

Grab and go for students

Students are also in a hurry to grab breakfast as they move through campus. As colleges and universities welcome students back for the fall semester, dining services professionals are revamping operations to suit these on-the-go students and also make the process safe for everyone.

Boston College Dining Services has been preparing by replacing self-serve processes with grab-and-go offerings, including at breakfast.

“Breakfast grab and go is poised to become one of the more exciting elements of our program,” said Frank Bailey, associate director of food and beverage. “We found now that our students are looking at breakfast very differently. For the generation entering our colleges and universities, breakfast, lunch and dinner all kind of fuse together.”

This fusing together means more of a savory focus at breakfast, and spicy elements that add a twist to traditional fare. Instead of the now ubiquitous overnight oat parfaits and açaí bowls, Bailey suggests a parfait of steamed jasmine rice with sauteed spiced vegetables and diced chorizo, stir-fried whole grain bowls with a fried egg on top with gochujang crema, and breakfast burritos that incorporate exciting flavors.

In fact, he said, these are almost mainstream menu items now, because current college-age customers grew up watching the Food Network and are knowledgeable about food.

Grab and go was popular with busy students before the pandemic, but these days it is crucial for the items to be readily transported, easy to eat and delicious.

Packaging is also important, and Boston College Dining Services is also considering the structural integrity of the containers or wrap.

“So many students are getting their breakfast and tossing it into backpacks, because they need to get to practice, class or the library,” Bailey said. “Their schedules are so dense that it is a struggle to provide them with delicious, nutritious meals in the time frame that they need it.”