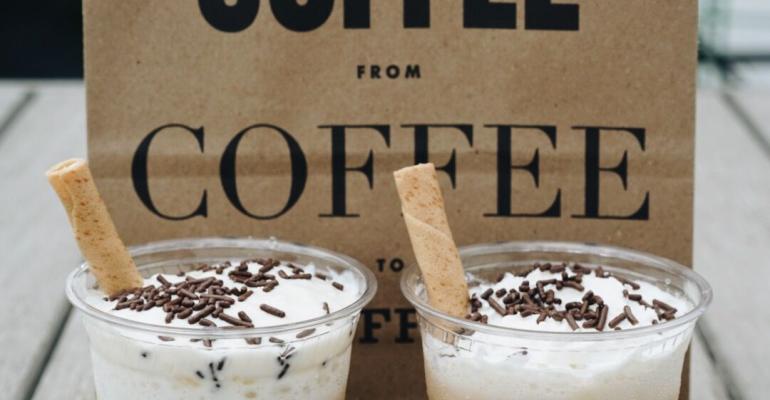 The hottest trend in coffee is cold brew, and operators are coming up with new iterations to appeal to consumers looking for the smooth, less acidic version of iced coffee.

According to the New York City-based National Coffee Association’s 2018 National Coffee Drinking Trends study, the percentage of Americans drinking coffee on a daily basis increased to 64 percent, up from 62 percent in 2017 and 57 percent in 2016. Some of that growth was due to Non-Espresso Based Beverages, including cold brew, which 11 percent of consumers said they drank the previous day. Also, 13 percent said they drank frozen blended coffee drinks the previous day, and 4 percent said they drank nitrogen infused beverages.

Cold brew coffee is prepared by steeping ground coffee beans in cold or room temperature water for 12 hours or more. The process makes the coffee sweeter and less bitter than iced coffee, which is brewed coffee poured over ice. Consumers are seeing cold brew as less of a novelty and more mainstream, and are seeking new ways to enjoy the beverage. Operators are responding by developing innovative flavors and presentations.

“We're always experimenting with innovative ways to showcase our responsibly-sourced coffees,” says Allie Caran, director of education at Toby's Estate. “Frozen drinks are a summertime classic, so we thought it would be fun to create a delicious riff on a simple frozen coffee drink for our guests to cool off with.”

The new smoothie is one of several fall menu items that are designed to be healthy offerings that help consumers maintain steady and balanced energy throughout the day. “The protein balances out the caffeine for sustained energy all morning long,” Schulze says. “In essence, it’s the perfect, all-in-one breakfast option that combines your morning cup of coffee with substantive ingredients in a delicious and satisfying smoothie.”

Another trend in cold brew coffee is to expand on the nitro brew coffee phenomenon. “Nitro brew is a method extremely similar to the cold brew,” says Mary Catherine Vay, brand manager for Morrison Healthcare. “However, the coffee is made with the cold brew process and then infused with bubbles of nitrogen while in a keg.”

She adds that nitro is the future, because it is slightly naturally sweeter than cold brew coffee and much smoother. “The smooth creamy taste has less need to add any flavors or creamers which is appealing to the more health conscious coffee drinker,” Vay says. “It is very popular with millennial consumers looking for a unique flavor profile.” In fact, the contract foodservice provider is working on incorporating a nitro system into new builds for its coffee shops.

One growing trend in coffee shops, Vay says, is consumers will be able to fill up a growler with cold brew coffee and take it home. That’s another offering that Morrison Healthcare hopes to launch.

Operators are finding they can infuse other ingredients into cold brew coffee. At Habit Donuts in Denver, one new item is CBD cold brew, which is nitro cold brew with Cannabidiol, a cannabis compound that is said to have medicinal qualities, but not psychoactive properties. “It’s our nitro cold brew infused with 10 milligrams of CBD in a 12 ounce cup,” says store manager Hayley Charles. “It won’t get you high, and you won’t fail a drug test. It’s good for pain, and for focusing.”

People do want to taste the coffee. Another trend that might catch on with cold brew, as it did with coffee in general, is operators heralding the quality of the beans and the expertise of their roasters.

At Long Beach, Calif.-based It’s A Grind Coffee House, the specialty whole bean coffees are craft-roasted by a fulltime master roaster, a 19-year veteran of the coffee industry. “By utilizing his knowledge and expertise, we’re able to completely control the roasting process to ensure that every bean is roasted and flavored perfectly,” says Sam Ferreira, president of Retail Food Group - USA, parent company of the 26-unit It’s a Grind and 60-unit Gloria Jean’s Coffees. “All roasting and R&D takes place at our Southern California headquarters in our full test kitchen and roasting and processing facility. It’s this control that allows us to produce the signature delicious blends guests love and crave.”

That includes cold brew, which at It’s A Grind Coffee House involves an 18 to 24 hour infusion process. Ferreira adds that It’s A Grind Coffee House has been making cold brew coffee since it opened its first coffee house in 1994, which was before cold brew became popular. “We’re dedicated to ensuring that both our country of origin whole bean coffee cold brews and our coffee-forward, gourmet flavored cold brews exceed not only our standards of quality, but also our guest’s expectations,” he says.

Another way to meet guests’ expectations is to offer several different coffees, including cold brew, in one location. That’s the idea behind Fairgrounds Coffee and Tea, which has café locations in Chicago, Minneapolis, and Los Angeles. The cold brew coffees are on kegged, so the barista simply has to pull a tap.

“If I can do iced latte on tap and kombucha on tap, I can do cold brew on tap,” Michael Schultz, founder and CEO of Coffee & Tea Bar Holdings, parent company of Fairgrounds. “The product we’re serving that is most in demand are kegged cold brews. We have the ability to have flights of different cold brews from across the country.”

The cold brew on tap trend will grow, Schultz says, as operators try to attract more millennials.  “It used to be kegs of beer and bean bags ping pong tables,” he says. “Now it’s kegging everything and infusing it and tender aging it in bourbon barrels. It’s funny how it similar it is to craft beer.”

Nitro infused drinks, growlers to take home, and cold brew on tap are trends that seem to borrow from the cocktail segment. Another trend might be cocktails themselves. Virtuous Pie in Portland, Ore., uses cold brew in some brunch cocktails. “Our guests have really loved that,” says general manager Chelsea Boyer. “We have our take on a White Russian, called the Snooze + Booze, that uses cold brew coffee, vodka, and oatly milk. That is another fun trend for us.”