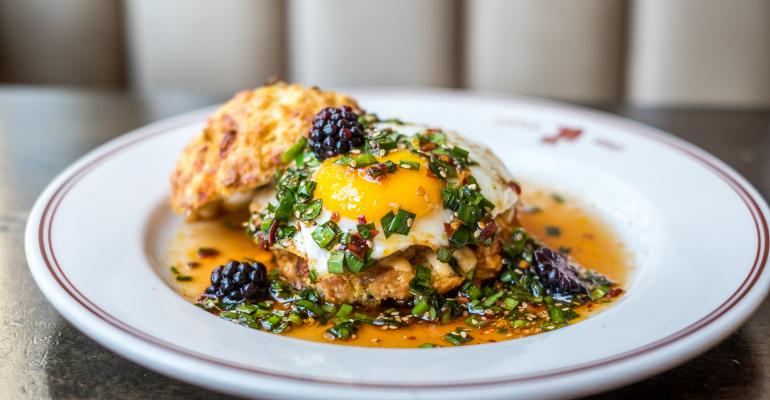 Striking a balance between the exotic and the familiar is the key to success with global breakfast fare.

Breakfast in America is steeped in tradition. Yet it excels at adapting flavors and ingredients from far-flung places. Globally inspired creations like kimchi and eggs, breakfast tostadas and New Zealand venison sausage may seem worlds away from what Americans eat every day, but operators can make them feel right at home with dishes like those by playing up staples like eggs, bread, breakfast meats and potatoes. Striking a balance between the exotic and the familiar is the key to success with global breakfast fare.

The menu of Breakfast Republic, a five-location breakfast restaurant concept in San Diego, shows how diverse culinary influences flourish together. “I love the idea of taking a traditional, ethnic dish that’s probably a dinner item and putting my twist on it as a breakfast dish,” says founder and owner Johan Engman.

About a third of the items on the Breakfast Republic menu blaze new trails in breakfast while the remainder hew to American favorites, a ratio that pleases patrons. “It just seems that today it is culturally more of a thing to have brunch at places that are raising the bar for breakfast and making it more fun,” says Engman.

At Little Goat Diner in Chicago, This Little Piggy Went to China was inspired by chef-owner Stephanie Izard’s travel in China. The major components are Szechuan pork sausage, sunny-side-up eggs, a sesame-cheddar biscuit and chile-garlic-chive sauce. “It has nice little Szechuan peppercorns that give you a tingly feeling in your mouth, yet at the same time it has the familiarity of a breakfast biscuit sandwich,” says Izard.

“Some items we have morphed a little more than others, just to make them balanced and to put our own twist on ideas and flavors from around the world,” says Izard.

Aroha, an upscale restaurant in Westlake Village, California, introduces Angelinos to New Zealand cuisine, a distinctive mix of Asian, Pacific Island and European influences. One of the brunch favorites is Caramelized Pineapple Pancakes with coconut and fresh passion fruit topping. “Passion fruit is used everywhere in New Zealand,” says Chef-Owner Gwithyen Thomas, a native of that land. The fruit’s golden flesh and edible black seeds have “an aroma and taste that just remind you of good things.”

At University of California, Santa Barbara, students shared their opinions about what should be on the menus of the new Portola Dining Commons on campus. “We found out that not only do they want their global flavors, but they want them for breakfast and brunch, too,” says Dusty Cooper, senior executive chef.

Served in a bowl for brunch is poached egg over Korean-inspired white kimchi, roasted pork and sambal rice. “It has a little bit of everything students are looking for — the protein, the heat, the ethnic spice and the egg, which pulls it all together,” says Cooper.

Where next will the American breakfast odyssey lead? Breakfast Republic’s Engman plans to find out. He’s taking a three-month global research trip next year to places like Tanzania, Congo and the Philippines. “I don’t know what I’ll taste,” says Engman. “But it’s very likely there will be something that piques my interest that I can tweak for the next breakfast menu.”