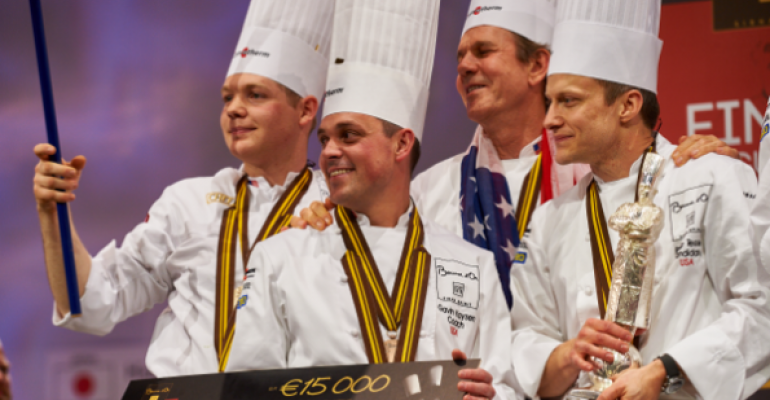 Team USA just took the silver in what is widely regarded as the world’s most prestigious cooking competition.

Phillip Tessier and Skylar Stover, both cooks at The French Laundry in Yountville, Calif., represented the United States at the biennial Bocuse d’Or competition in Lyon, France, and took second place.

I mean, it’s not curing cancer huge or World Cup huge or Super Bowl huge. It’s more like Westminster Dog Show huge, or the dance contest in Strictly Ballroom huge, which is to say that, to a relatively small group of people who are interested in this sort of thing, it’s extremely important. Many of them probably couldn’t care less that McDonald’s has a new CEO, but this is a big deal for them.

Sure, actually winning the contest, named after and established by French culinary pioneer Paul Bocuse — one of the creators in the 1960s of Nouvelle Cuisine — would have been great, but in all its years of competing, Team USA has never even mounted the podium before. The best it has done is 6th place, which was achieved twice, once by Timothy Hollingsworth — at the time The French Laundry’s chef de cuisine — in 2009, and also by Hartmut Hendke of Handke’s Cuisine in Columbus, Ohio, in 2003.

I’ve already written about the history of Americans’ performance in the competition itself, which you can read about here.

Tessier was The French Laundry’s executive sous chef when he became the leader of Team USA. Now he has a broader role within the Thomas Keller Restaurant Group: He's the company's "Culinary Scribe," which I'm told means he oversees various culinary elements throughout the company. Stover was his commis, or assistant, in the competition, and is chef de partie at The French Laundry. They won €15,000 (about $17,000) in prize money and the adoration of the subset of chefs and foodies who care about this.

Ørjan Johannessen, from the restaurant Bekkjarvik Gjestgiveri in Austevoll, Norway, and his commis Jimmy Øien won the contest for that country, which is a Bocuse d’Or power house: Norway has taken the gold five times and made it to the podium nine times, and the competition has only been held 15 times.

Norway’s dominance isn’t just happenstance: New York-based chef and restaurateur Daniel Boulud, a native of Lyon, friend of Bocuse and a principal founder of Ment’or, which spearheads the United States’ presence at the Bocuse d’Or, said Team Norway has serious backing and a budget of about $1 million.

Maybe that budget’s even bigger now, Boulud cited that figure back in 2008, when he was just beginning to try to generate interest in the competition in the U.S.

But now the United States has a support system in place, too. It's not a million dollar support system, but it's definitely first-rate, headed up by Thomas Keller, Boulud and Paul Bocuse's son, Jérôme Bocuse. Team coaches include superstar Chicago chef Grant Achatz of Alinea and Next among other restaurants, and Gavin Kaysen, a former Bocuse d'Or competitor who recently opened Spoon and Stable in Minneapolis.

Before that, however, Kaysen spent six years as executive chef of Café Boulud in New York.

Achatz, before striking out on his own around the turn of the century, worked at The French Laundry.

And they took home the silver.

Update: Jan. 29, 2015: This blog entry has been updated with further details about Phillip Tessier's current position within the Thomas Keller Restaurant Group.