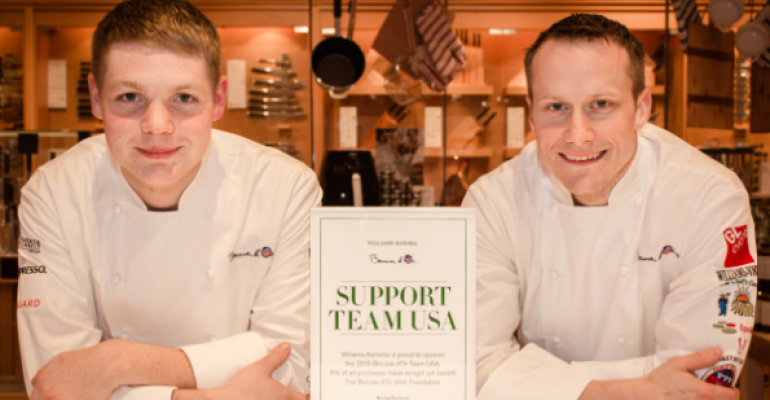 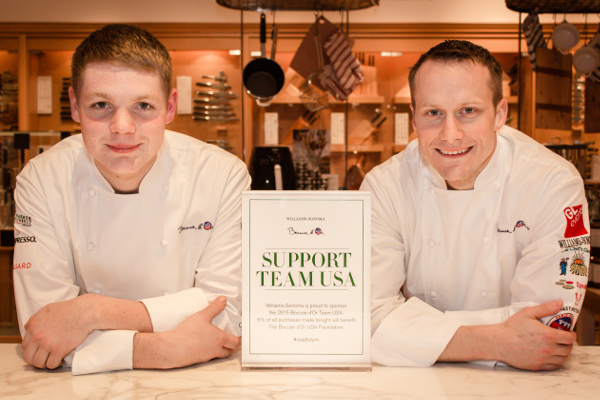 Meet Philip Tessier and Skylar Stover, the two young men who will be representing the United States in what is widely regarded as the toughest and most prestigious cooking competition in the world — the Bocuse d’Or.

Tessier, on the right, is executive sous chef at The French Laundry in Yountville, Calif., so he’s no slouch, and Stover also works in The French Laundry's kitchens, in garde manger, which is also quite a respectable job. The two applied together to compete for the U.S. in the Bocuse d'Or.

Named for, and established by, legendary French chef Paul Bocuse — who helped lead the charge of French culinary reformation with the introduction in the 1960s of Nouvelle Cuisine — this biennial culinary Olympiad, held in Lyon, France, features teams from a couple dozen countries who must prepare a fish dish and a meat dish of great elaborateness and exquisiteness. The chefs are told months in advance what type of meat and fish they must cook and spend that time practicing, often with coaching from more experienced chefs.

But like the actual Olympics, you can train as much as you like; it's all about the execution.

Unlike the actual Olympics, the United States doesn't do very well in it.

Last year Richard Rosendale of the Greenbrier hotel represented the stars and stripes and came in 7th. That was better than James Kent from Eleven Madison Park, who carried the American banner in 2011 and came in 10th.

Timothy Hollingsworth, then The French Laundry's chef de cuisine, who represented us in 2009, fared a bit better, coming in 6th.

Hollingsworth was the first chef to benefit from an American support network. Following Gavin Kaysen’s less-than-stellar performance in 2007, when he placed 14th (it wasn’t his fault; a French dishwasher ate Kaysen’s chicken wings — a crucial garnish — for no apparent reason), Bocuse himself asked Daniel Boulud to set up Bocuse d'Or USA to select and raise money for the competitor (incidentally, it was through the Bocuse d'Or that Kaysen, who was then executive chef at El Bizcocho at the Rancho Bernardo Inn in San Diego, came to meet Boulud, who soon hired him as executive chef at Cafe Boulud —  a position he still holds).

Boulud, along with Paul Bocuse’s son Jerome, then asked Thomas Keller to join the foundation, and the three of them have been lending their names and considerable clout to the competition ever since.

They’ve changed things up a bit this year, however: Hollingsworth and everyone after him had to compete in a pretty hard core cooking contest before being named to Team USA to compete in Lyon.

This year, instead, would-be participants had to write an essay about why they wanted to be in the competition.

Tessier told me he wrote about his experience attending a Bocuse d'Or competition and he stressed the importance of working as a team.

Stover said he didn't remember what he wrote.

I asked a Bocuse d'Or USA spokeswoman about the change, and she said the foundation wanted to spend its resources on cultivating our representatives rather than on selecting them, which seems reasonable enough.

Although French Laundry owner Thomas Keller clearly had a role in selecting the winners — not because they work for him, but because he’s one of the principals in the foundation — Tessier said he was no shoo-in, and that Keller didn’t even go out of his way to encourage him to apply.

At any rate, over the next year he and Stover will be coached by the likes of Grant Achatz and Gavin Kaysen, which should be fun and exhausting.

So far, the establishment of Bocuse d'Or USA hasn’t meant we've fared much better in the Bocuse d'Or itself. Apart from the unfortunate chicken wing-eating episode of 2007, we'd performed about as well without its support, at least in the recent past. Fritz Gitschner, then working at Houston Country Club, headed our team in 2005 and came in 9th, and in 2003 Hartmut Handke of Handke’s cuisine in Columbus, Ohio, came in 6th for us — which apparently is as well as we’ve ever done.

In 2001 our competitor was Tracy O'Grady, who worked at Kinkead's in Washington, D.C., at the time and now has her own place, Willow, in Arlington, Va. I don't know how she fared; it’s a lot harder to find out how someone placed in a contest if they didn’t win.