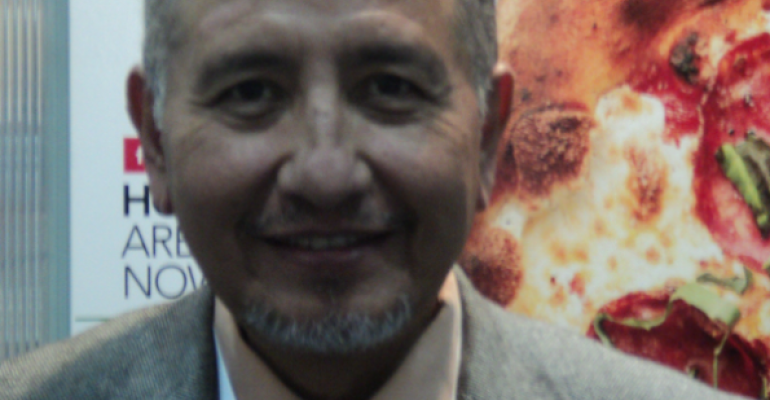 A piece of the action from the Las Vegas strip 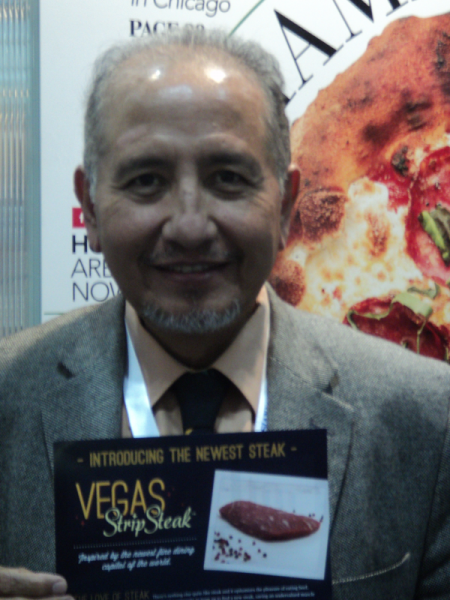 This is Antonio Mata. He’s at the National Restaurant Show promoting the Las Vegas strip.

That has nothing to do with street that runs through a city in the Mojave Dessert; it’s a new cut of beef he developed.

“I wanted it to be a name people would remember,” said Mata, who was in Fast Company magazine’s recent list of the 100 most creative people.

It’s not Mata’s first cut. A meat scientist, he spends a lot of time poking around the muscles in cattle that are generally sold as ground beef and tries to find tender ones that might be of higher value.

He did that some years ago with the teris major muscle that’s now marketed as the petit tender.

The Las Vegas strip is more tender — as tender as the New York strip, which it resembles, in high-grade USDA Choice animals, and more tender in the less marbled Select grade animals.

Unlike the petit tender, it has uniform thickness that makes it easier to work with.

The Las Vegas strip’s scientific name is the subscapularis, and it lies between the shoulder blade and the backbone, so it doesn’t move much; that’s why it’s so tender.

(It does get a little exercise, however, because it’s attached to the cattle’s seratus ventralis — the breast muscle that makes up most of the short rib).

In developing the Las Vegas strip, Mata did something that he said is a “different paradigm” from how most meat is marketed: He patented the process by which the cut is separated from its neighboring muscles, and he wants a piece of the action.

He doesn’t want much, he said — “cents on the carcass,” and selling the cut as a premium piece of meat will add between $3 and $5 to the price of the carcass, so he thinks it’s a reasonable thing to ask.

He said he’s currently talking to major packers, and hopes to have a deal sign in the next month or two.

So when a beef supplier tries to sell you a Las Vegas strip, now you’ll know what he’s talking about.