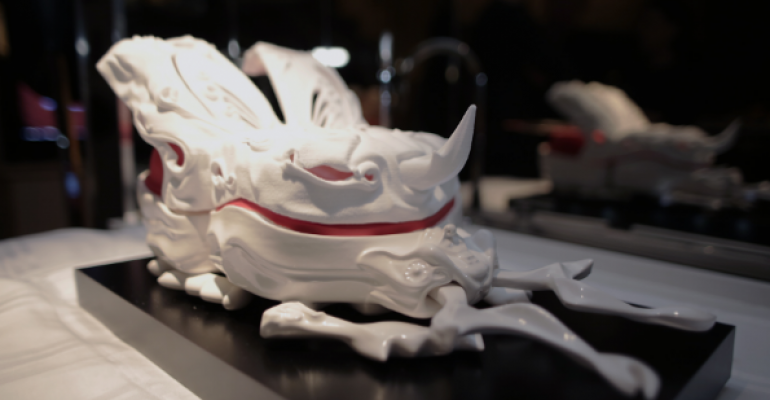 Cooking (or not) with 3D printers and Watson

We live in a golden age of food in America. Sure, there are problems — with hunger and obesity, rising costs, production challenges and arguments over how our food should be produced — but food fascinates Americans, and that’s all to the good, as far as I’m concerned.

We’re also in a marvelous age of science, unlocking the code of DNA, making ever faster and complex computers and opening up telecommunications in ways that our most imaginative science fiction writers didn’t think would happen for centuries.

We each have our own, individual communicators, just like on Star Trek, but better — with video cameras and flashlights and games and so on.

Over the course of the 21st century so far, chefs have been working to use modern technology to improve their prowess with food.

Apart from advances in equipment that allow for better control of temperature and moisture in cooking, chefs started with the gums, gelatins, modified starches and protein glues that were used by food manufacturers in the 20th century. Those became the foundation for molecular gastronomy. Now sodium alginate and guar gum and methylcellulose and transglutaminase are just part of many chefs pantries, just as immersion circulators are regular kitchen equipment.

And now they’re playing with even more Star Trek-like devices.

3D printers are sort of like very primitive versions of the Star Trek replicator.

O.K., not really — replicators could create anything from basically nothing. Tell the replicators a molecular formula, and out came a an electronic drill or a banana split. As I understand them, 3D printers just reproduce forms. Give it a 3D image of a goat, and it can make a plastic version of it.

Or, as some pastry chefs have learned, it can make a sugar version of it, or a chocolate one, to put on a cake, for example. Imagine candy made to look like your favorite pet, or wedding cake toppers that actually look like the people getting married.

The prospects are exciting to many chefs — so exciting that The Culinary Institute of America has teamed up with 3D Systems Corporation to figure out just what other foods can be printed with these machines.

I spoke to Matthew Griffin, who’s writing a book about 3D printing, so of course he’s excited about the prospects, but at the moment, he said, most people using 3D food printers are actually producing molds for cakes or ice cubes and whatnot. Any food that would be printed has to be malleable “basically anything you can extrude in a controlled way,” he said. You know, like a mushy paste. That does include creamy peanut butter, however, and it could make great pasta shapes.

Sugar printers use sugar that’s finely ground into powder that’s then heated or mixed with a bonding agent that lets it hold together. 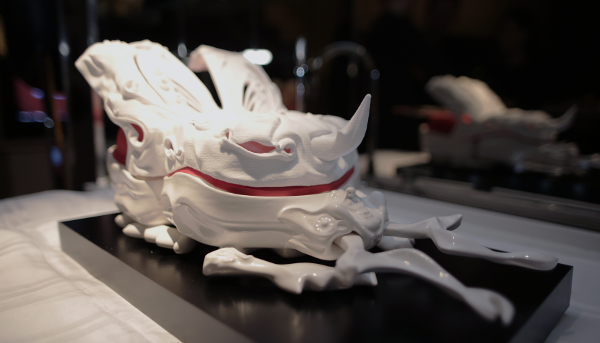 The CIA used the printer at the recent Consumer Electroncs Show in Las Vegas to make a ceramic piece of bakeware that looked like the bottom half of a fanciful giant beetle as well as a carapace on top made of flavored sugar.

So that’s neat, but we’ll see how far it goes.

We’ll also see how far another piece of advanced technology will take us: the artificially intelligent chef.

In the Fox TV series Futurama, the robot Bender fancied himself a chef, but having no palate, the food he made was terrible, even if it generally wasn’t lethal.

Now the IBM computer Watson is giving it a try.

Created by IBM, Watson is a computer that they argue is capable of learning. Give it enough data to chew on and let it try to solve problems, and it will get better at solving them over time.

Watson proved in 2011 that it could beat champions on the TV game show Jeopardy! It’s also reportedly working with medical institutions to try to cure cancer.

That’s great, but can it cook?

Probably not, but IBM and the Institute of Culinary Education in New York argue that it can help chefs be more creative.

They poured databases worth of recipes and nutritional information and information on the molecular composition of ingredients and asked it to think of new flavor combinations.

The idea is that chefs are limited by their training and experience. They can only have tried so many of what the Watson team estimates is a quintillion (1,000,000,000,000,000,000) flavor combinations. Most of them would be from a cuisine or two in which the chefs have expertise. What if you could take the flavors of the Baltic states, say, and mix them with the flavors of Korea and North Africa? What then?

Watson doesn’t know, but it’ll give it a try (Watson's handlers insist on calling it "it" rather than "him" or "her," which I respect), looking at flavors that often go together, then at other flavors that aren’t normally used in those combinations but that are chemically similar, and mixing them together in a list of ingredients. Chefs can set whatever parameters they like. They can dictate the cuisines or regions the flavor palate should come from. They can specify a protein. They can demand spicy combinations of tea, chocolate and parsnips — whatever they like.

Then the chefs will take all of the ingredients that Watson suggests and figure out how to use them all in a single recipe.

ICE has come up with a cookbook celebrating the results, Cognitive Cooking with Chef Watson, and they threw a dinner to let us try the creations.

To be honest, the combinations were interesting, but not mind-blowing. A Russian beet salad had prunes, which is unusual, but perfectly understandable. A Baltic herring salad was given an unusual touch by adding curry, which Marcus Samuelsson was doing at Aquavit a decade or more ago. 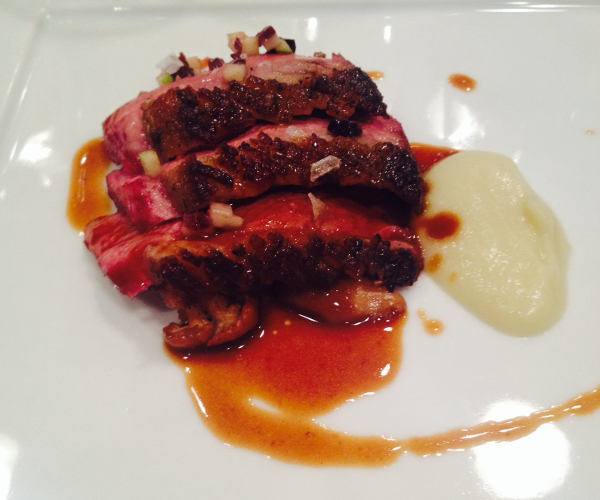 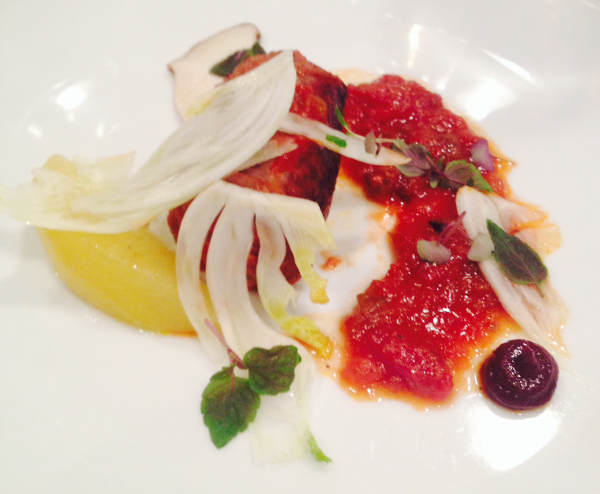 Roast duck was made two ways, once by Laiskonis and once by Briscione, and both times with cherry, olive and apple. They were really different from each other. Laiskonis, whose dish is on the right, conceived of the cherries, olives and apple as a type of gremolata, the condiment of lemon zest, garlic and parsley traditionally served with osso buco,  while Briscione, whose dish is on the left, put the dried cherries in a sausage and served it with apple poached with sage in olive oil and an olive-cherry jam.

They were good, but they displayed what we already knew, that Michael Laiskonis and James Briscione are talented chefs.

They said they enjoyed the exercise of having Watson tell them combinations they had to work with, but to me it seemed kind of like a very complex version of Boggle: Shake up ingredients, put some on a list, make the chef cook food out of them.

But hey, both Watson and 3D printers are new technologies. No need to count them out just yet.