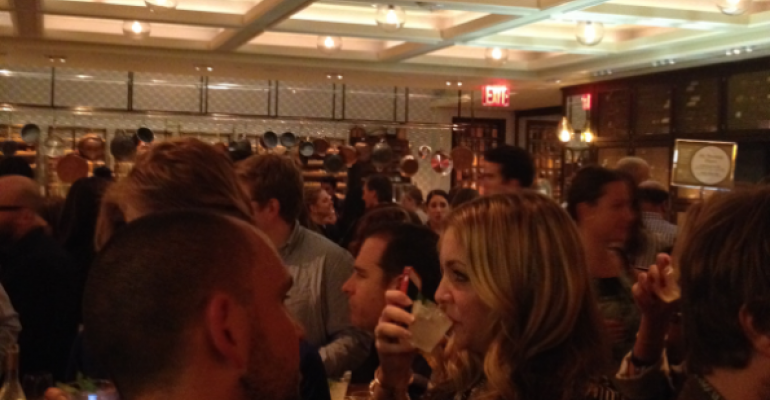 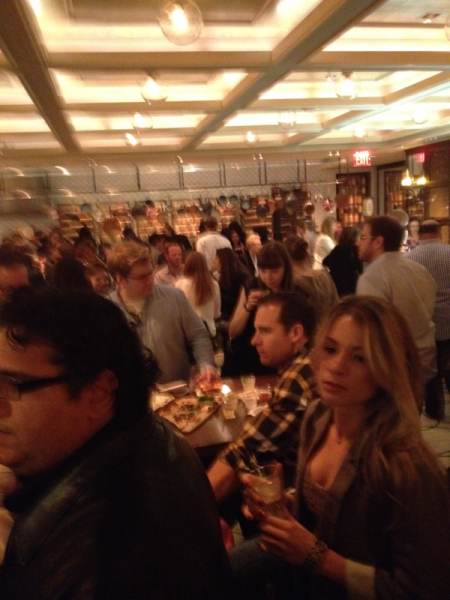 The organizers of this year’s New York City Wine & Food Festival estimate that some 55,000 people attended the couple dozen events that make up this bacchanalia of excess, the only justification of which that I can see is that 100 percent of the net proceeds of the weekend-long party crawl go to the Food Bank For New York City and Share Our Strength’s No Kid Hungry® campaign (click on the links to donate).

That and the fact that New York’s well-heeled foodies and the many out-of-town visitors who came to Gotham for the weekend seem to like to stand around in crowded venues and stand in line to eat and drink things.

That’s what they did at the Global Night Market, held at the Plaza food hall and pictured above, or at the extremely popular Burger Bash, where I didn't take picures but I did sample several hamburgers.

The five or six events I went to were well managed, filling, and pretty fun.

Attendees, except for those of us in the media with press tickets, have to fork over substantial amounts of cash to participate in the festivities.

The Burger Bash, for example, at which attendees got to stand on the concrete slabs of Pier 92 and drink inexpensive wine and mass market beer while sampling 20-some-odd burgers if they so chose, cost $250 to attend.

It would likely cost less than that to go to each of those restaurants, not stand in line and eat the burgers at your leisure.

On the other hand, you'd have to visit each of those restaurants. So the Burger Bash is a big time saver, and New Yorkers like that. And there seems to be a thrill in being able to gorge yourself on that much food all at once.

I have enough gorge-a-thons that are just part of my job (such as the Pork Crawl), that I find no particular thrill in consuming mass quantities just because I can. One delicious burger (or zero non-delicious burgers) is enough. To call two dozen of them overkill, well, it's like calling Hurricane Sandy a drag.

Having people pay a lot of money to overeat while raising money for people who don’t have enough to eat is kind of weird. Actually it’s really weird. But the NYCWFF’s organizers say they think they raised about $1 million for the charities (I guess they’re still figuring out how much they netted).

Hey, whatever works. If weird things feed hungry kids, then let’s all get really weird.

Or just donate to Food Bank For New York City and Share Our Strength’s No Kid Hungry® campaign.

The different parties have different sponsors, who I assume want to get their names out in front of the sort of people who love food and drink and have the wherwithal to spend a lot of money on them. Several of them were liquor companies, some of which made cocktails that for me were the low point of the festivities.

They were worse than the two women who parked themselves at the dumpling booth of the night market, oblivious to the fact that other people might like to try a dumpling, too.

I’m not going to name names, but one liquor sponsor was handing out cups of green liquid that tasted like a melted lime Jell-O shot (no offense to Jell-O). Others were simply childish — a shot of sponsoring beverage in a cup of cloyingly sweet foolishness.

That in a city where, if you tossed a cocktail shaker in the air it would very likely be caught by someone who could make a decent drink. And there’s no shortage of genuine cocktail consultants here who would happily develop a delicious drink that's easy to make and distribute in large batches, no-doubt for a fraction of what it must cost to sponsor an NYCWFF event.

Given that the sponsors were looking to make a good impression on a crowd of enthusiastic, well-to-do foodies (an equivalent term ought to be thought up for cocktail enthusists, and I don't think “drinkies” will cut it) you’d think they’d try to put their best foot forward.

And some of them did. The bourbon company that sponsored brunch at Commerce served us a lovely coffee-and-cream cocktail in a Martini glass to get us started, and a bitters company added simple syrup to their product to make a satisfying amaro.

So it can be done, and I think sponsors of events like these would do well to remember that they’re catering to educated consumers, not 21-year-old frat boys.

November 6: This entry has been updated with links to Food Bank for New York City and Share Our Strength's No Kid Hungry campaign. Click on them to donate.