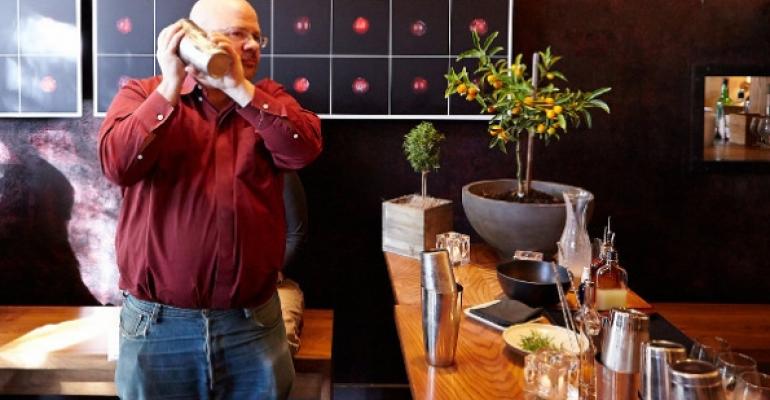 25 trends in two days in Oakland

“People in Oakland don’t give a sh*t,” an Oakland, Calif., restaurateur told me with glee.

He meant it as a compliment — more than a compliment, a glorious affirmation of the city he calls home: the dusty, battered sister of dour, politically correct Berkeley and expensive, lily-white (well, and Asian) San Francisco.

Oaklanders combine restaurants with art studios. They hold all-you-can-eat pig roasts for just $20 a head. They’re non-sh*t-giving, beer-drinking proletarians, but of mostly local beers without any backing from large corporations — this is the Bay Area, after all.

Also they drink cocktails, sometimes barrel-aged, and made with house-made bitters and syrups, of course.

I was in Oakland as a guest of the Almond Board of California, whose growers are just over the mountains in the state’s Central Valley, where some 80 percent of all the world’s almonds are grown. We visited 19 restaurants and almond-product manufacturers over the course of 26 hours, to look at trends and see all the trendy things that could be done with almonds in what is these days often regarded as the most avant-garde part of the Bay Area.

We saw a lot of trends. I’m putting them in boldface for your convenience.

Trends plus almonds equals the Mai Tai, a retro tiki cocktail made with the almond syrup orgeat. We had two of them. The first was a virgin version at Plum Bar, San Francisco chef Daniel Patterson’s Oakland outpost. Obviously the orgeat was house-made, but it was topped with candied kumquat from a small tree growing in the restaurant, because that’s how they roll in the Bay Area. Plum Bar also has a row of barrels for aging cocktails, one of the biggest booze trends out there, but Patterson’s team takes it to another level by aging bespoke cocktails for their customers. Guests spend $75 for the barrel and then whatever a barrel’s worth of cocktails would normally cost, customized to guests’ tastes.

We also had a Mai Tai at Flora, the art deco restaurant and bar by Dona Savitsky and Thomas Schnetz, who mostly run Mexican restaurants, but liked the space near the historic Fox Theater. Chef Rico Rivera also made a cauliflower soup with almonds, and meatballs with almonds cooked in almond milk.

Between those stops we went to Donut Savant, a specialty doughnut shop, where not only did we sample the cron’t, owner Laurel Davis’s $2 interpretation of the Cronut (regular doughnuts are 50 cents), but almond meal-based, gluten free, Paleo doughnuts from Muffin Revolution, a small local company owned by Christy Kovacs, who stopped by with her muffins so we could eat them. To give those muffins Omega-3 boosts, she also adds chia, hemp or flax seed to them.

Also at Donut Savant, we had Louisiana-style coffee, with chicory, which I’m putting in boldface only because it’s trendy in the Bay Area. It hasn’t caught on anywhere else as far as I know (except for Louisiana, of course).

We also dropped by Mua, where we had, among other things, trout, endive and almond salad.

Trout’s not super trendy yet, but it’s getting there; I had trout collar the day after my Almond Board visit at State Bird Provisions in San Francisco, and you can’t get much trendier than that place.

We had dinner at Hopscotch, where one of their popular drink options is a “hop and scotch,” or a fancy Boilermakers, which is what they called them at PlumBar.

This is definitely a thing. Options at PlumBar they ranged from “The Deal” a Tecate with El Charro Reposado Tequila for $8, to the $27 “Book of Five Rings” which is a Hitachino Red Rice Strong Ale with Hakushu 12-year single malt whiskey.

At Hopscotch they were al $13 and included that same Hakushu with an Echigo red ale, as well as a Yamazaki 12 year with Asahi Black. I’ve seen similar fancy Boilermakers in Brooklyn, although I don’t recall so many Japanese options there.

Then again, the West Coast tends to do Asia better than the East Coast.

The trend highlights of the next day were all about what the Bay area excels in — specialized diets and technology.

Rennell’s planning on opening a grab-and-go operation based on those bars and other fruits and vegetables. It will be called The Core Kitchen, and it’s slated to open in downtown Oakland in July. His goal is to have them in 11 cities over the next five years,

But the coolest thing was what Kite Hill is working on. They’ve figured out how to add enzymes and cultures to turn almond milk into actual cheese. Well, O.K., not quite actual cheese, because the United States Department of Agriculture says cheese has to be made from dairy products (which, really, is reasonable enough), but it’s a cultured product that ages like cheese and tastes kind of like it, unlike those fake nut pastes that currently pass for vegan cheese.

I found that their product tasted more buttery than cheesy to me, but it’s till an interesting concept.

We spent the afternoon in a beer garden called Lost & Found, where we had deviled eggs flavored with kimchi, and drank mostly local beer, the majority of which were relatively low in alcohol, so people could drink more than one of them. Those so-called sessionable beers are also trendy.

We swung by Michel, which claims to be the only French restaurant in Oakland, and had, among other things, a cassoulet that was topped with local greens. I’m not sure how trendy that is, but it was delicious, and a great way to put some Bay Area into a classic French dish.

We wrapped up the evening at Shakewell, where they started us off with the Pear-la, a sherry cocktail made with manzanilla, tequila, pear liqueur and lemon zest.