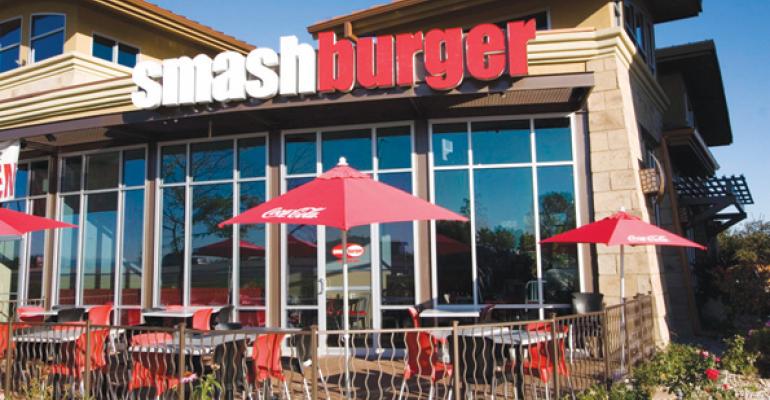 Fast-casual burger chain Smashburger began a three-week media buy this week for its first TV commercial in seven markets, a campaign that the brand intends to expand rapidly if it proves as effective as its radio campaigns.

Morgan said the timing of this first TV campaign was not necessarily about beating its “better burger” competitive set to the small screen, but rather about boosting its unaided awareness through TV like other fast-casual brands Chipotle Mexican Grill and Panera Bread have begun to do.

“As a young brand, our biggest white space was to raise unaided-awareness levels,” he said. “If we can turn lights on for consumers, they’ll come in and try our experience. It can take a long time to turn on that awareness with local-store marketing and traditional paid-media approaches like print. We still love those tactics, but it comes down to how much you’re willing to over-invest to turn on those lights sooner. We’re pretty willing to get those levels now, even though our densities may not warrant that right now.”

Smashburger will test the TV campaign’s proof of concept and likely expand it in the same way it did with its first radio campaign, which started 16 months ago, also in a handful of key markets.

“We loved the ability of radio as a medium to tell our story instead of a fixed ad in print,” Morgan said. “Now we’re in 25 markets with radio consistently. We wanted the same overall strategy for TV, with a broad campaign with heavy media buys. We can tell that brand story, and now we’re able to show the story at the same time.”

Smashburger went through the request-for-proposal process with several large advertising agencies, Morgan said, but the brand awarded the account to Denver-based Definite Productions, a firm led by co-founders Nate Watkin, 25, and Brad Scott, 26. The two were finalists for a crowd-sourced commercial contest held by Doritos in 2012 leading up to that year’s Super Bowl. Their young agency also has produced work for Frito-Lay, Proctor & Gamble, Kia and Vitamin Water.

“We wanted to find the right partner with the right enthusiasm for our brand and who maybe shared some traits we see in ourselves, like risk-taking and an entrepreneurial mind-set,” Morgan said. “They’re in their mid-20s, were in college when we opened our fourth store in Ft. Collins [Colo.], and were our consumers first. … We liked their portfolio work, their willingness to collaborate with us, and the fact that they understood this was our first commercial, so we needed a strong branding spot.”

Smashburger operates or franchises more than 200 locations in 29 states and four international markets.