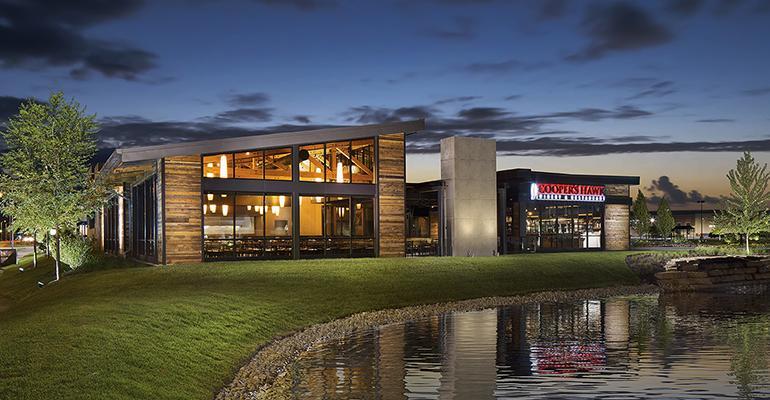 Cooper's Hawk
Cooper's Hawk plans to open Piccolo Buco in partnership with a restaurateur from Rome. This is the Cooper's Hawk location in Oak Lawn, Ill.
News>Casual Dining

The Downers Grove, Ill.-based casual-dining brand also said it will team with celebrities like Tom Colicchio and Carla Hall to create a chef-in-residence series at Esquire by Cooper’s Hawk in Chicago, which is scheduled to reopen in this spring after closing in its first two months because of the COVID-19 pandemic declared in March 2020.

“Slated to open in the first half of 2022 in Oak Brook, Ill., the company has partnered with Rome’s famed Piccolo Buco to bring the best of Italy to the United States,” the company said.

Both concepts mark the introduction of the “by Cooper’s Hawk” signature brand efforts, the company said, which has a mission of developing a hospitality “ecosystem” that leverages the parent brand’s wine club community of more than 540,000 members.

Piccolo Buco by Cooper’s Hawk will offer a Neapolitan pizza and Roman-style dishes using many ingredients sourced from Italy. A spokesperson said the company would have details to release “in the coming weeks.”

“Cooper’s Hawk worked in collaboration with Piccolo Buco owner, Luca Issa, in Rome to bring this unique pizza experience to wine club members and guests in Chicago.,” the company said.

In a June 2021 interview, Tim McEnery, Cooper’s Hawk CEO and founder, said the new concept was another of the growing “curated experiences” it would offer its fans, which includes the wine club.

McEnery said he was also moving Cooper’s Hawk into the travel business with wine-themed trips through a program called “Travel with Cooper’s Hawk.” The chain had already offered group trips to wine regions, from Napa Valley to Argentina, he said.

Wine club members also will have access to the planned Esquire by Cooper’s Hawk chef-in-residence series, the company said, as well as other benefits such as rewards, wine pick-up and special tasting experiences.

Cooper’s Hawk was founded in 2005 and has about 50 winery-restaurant locations. The company in 2019 received an investment from a fund managed by private-equity firm Ares Management Corp.