Multicultural menu items continue to have a big impact on menus, such as this dish at Wildflower at the Grey Fox Inn in Stowe, Vt. Executive chef Jonathan Shepard starts by cooking Spanish octopus in a very European way: He prepares a court-bouillon with celery, fennel, onion, garlic, bay leaves, whole lemons, white wine, black pepper corns and salt. He dunks the octopus in it and then shocks it in an ice bath, repeating that 4-5 times, resulting in an octopus that curls nicely.

Then he simmers the octopus in that liquid for 2-3 hours.

Next, he tosses the octopus in orange juice that has been reduced and seasoned with salt, pepper and olive oil, and crisps it up on a grill.

Then the service format and accompanying condiments draws from East Asia. He takes Chinese bao buns, steams them, opens them and brushes them with a Korean ssam sauce made with miso, gochujang, garlic, sugar, sesame oil and scallion. Then he cuts the octopus tentacles in half, puts them in the buns with cucumbers seasoned Japanese-style in sugar and salt and garnishes them with butter lettuce.

Then he shreds the chicken and combines it with elbow macaroni and a cream sauce and tops it all with Parmesan and cheddar cheeses and bakes it.

Many Black chefs across the country are delving more deeply into their culinary heritage these days, and that’s what Tiffany Derry is doing at her new restaurant, Roots Southern Table in the Dallas suburb of Farmers Branch, Texas.

Black eyed peas were a staple in her home when she was growing up, and she uses them three ways for this dish: As the base for the hummus, in accompanying fritters and in the salad that tops the hummus.

For the hummus, Derry whips cooked black eyed peas with garlic, tahini, lemon and olive oil until they’re very smooth. Then she tops that with a salad of black eyed peas mixed with onions, bell peppers, celery, dill, parsley, mint and a vinaigrette.

The hummus is accompanied by akara, a fritter from West Africa made with uncooked black eyed peas, habanero peppers, onions and Derry’s own Creole seasoning.

It’s all accompanied by an XO chile sauce made with fried garlic, shallots, chiles, sweet pepper and dried shrimp.

Every summer sees a surge in drinks with watermelon in them, but this big fruit that reaches its sweetest point, and lowest price, at the height of summer is especially widespread this year. A prime example is this cocktail at Abuelo’s Mexican Restaurant, a chain of around 40 units based in Plano, Texas. For this drink, they combine watermelon-infused tequila with watermelon vodka, shake that with ice along with lime, lemon and orange juices, pour it in a cocktail glass and garnish it with a lemon wedge.

The salt will cause the vegetable juices to run out, which Talmor recommends soaking it up with bread, or even better, using it as the liquid for a Dirty Martini.

Pea protein and other processed legumes disguised as beef (usually hamburger) have rapidly spread across the country, and chicken substitutes started emerging this summer, but Long John Silver’s, based in Louisville, Ky., is taking the beans-as-animals trend a step further by testing Good Catch, a blend of six legumes — peas, chickpeas, lentils, soy, fava beans and navy beans — that are breaded and meant to resemble lump crab or flaky white fish.

Many chain restaurant chefs have remarked on how these vegan meat analogs don’t just sell decently in large, coastal, trend-forward markets, but throughout the country.

To see if that holds true with seafood-free seafood, LJS is testing this product at two restaurants in Georgia (52 Bullsboro Dr. in Newman and 1805 N. Slappey Dr. in Albany) and three locations in California (3801 Ming Ave. in Bakersfield, 7228 Stockton Blvd. in Sacramento and406 W. Shaw Ave. in Clovis).

The chain has nearly 700 units total. 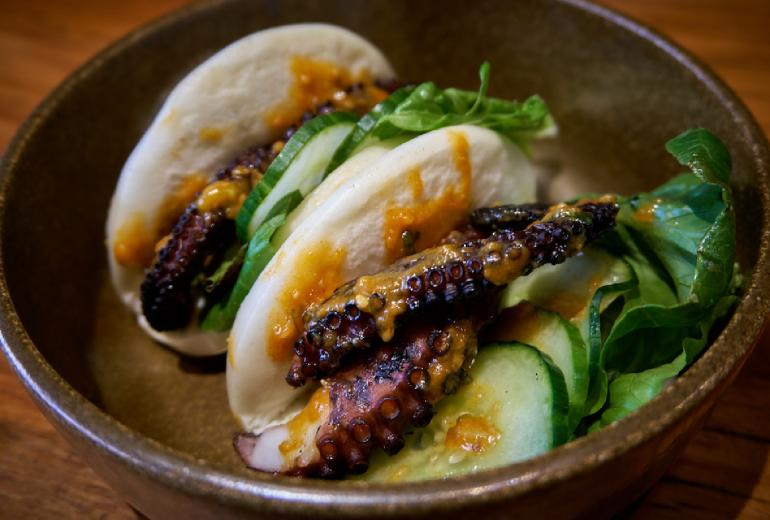