/sites/all/themes/penton_subtheme_nrn/images/logos/footer.png
Recent
Recent
How Robeks’ president is leveraging his dual role as franchisee to build business
May 26, 2022
Starbucks, restaurant operators pitch in after Uvalde, Texas, shootings
May 26, 2022
Trending this week: McDonald’s to debut chocolate-pretzel McFlurry
May 26, 2022
Solutions to supply-chain woes shared at the National Restaurant Show
May 25, 2022
Flavor of the Week: Korean Barbecue
May 25, 2022
Featured
Tech Tracker: Toast launches POS solution for quick-service restaurants
May 17, 2022
Memphis Seoul brings Korean BBQ and Southern cooking to Brooklyn
May 11, 2022
Executives on the move: 13 restaurant leaders with new positions in April
May 03, 2022
Juice it Up finds new energy during the pandemic
May 25, 2022 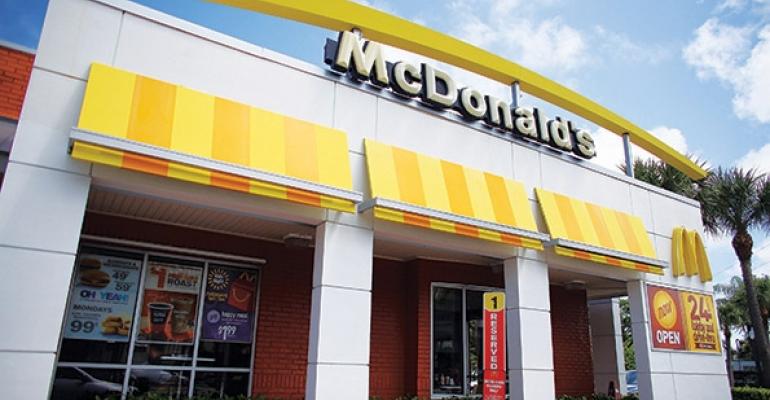 All-day breakfast lifts sales, but concerns over discounting persist, according to analyst survey

All-day breakfast, higher prices and better weather all contributed to higher sales at McDonald’s Corp. restaurants in the fourth quarter, according to a survey of franchisees by Nomura analyst Mark Kalinowski.

But surveyed franchisees remain deeply skeptical about the impact of discounting on their profits, with at least one operator suggesting that McDonald’s new McPick value menu “must die.”

The comments reflect the challenge McDonald’s faces in convincing franchisees that discounting is the correct route in an era of heavy discounting by major quick-service players — McDonald’s chief rivals, Wendy’s and Burger King, are both marketing major value platforms at the moment.

They also suggest that McDonald’s foray into all-day breakfast was a success. In fact, many surveyed franchisees commented that the biggest challenge was the limited nature of the menu — only nine breakfast items are offered after 10:30 a.m., and many customers want more options.

All-day breakfast “raised the brand profile,” one franchisee said. It “brought in some people who have become bored with McDonald’s.”

Kalinowski has been surveying McDonald’s franchisees for years. The survey is not scientific. This quarter’s poll, for instance, surveyed just 26 operators who own 209 units — a tiny fraction of the company’s 3,000 operators and 14,000 locations.

But the survey provides some indication of operators’ views, while also offering at least a limited picture of the chain’s sales.

Surveyed franchisees said their same-store sales rose 4.1 percent in the fourth quarter, a number that, if it holds, would be the best performance by McDonald’s since the company reported an 8.9-percent same-store sales increase in the first quarter of 2012.

There is wide belief that McDonald’s has generated strong momentum due to all-day breakfast, followed up by the McPick menu, which gives customers the option of picking any two items from a selection of four for $2.

BTIG analyst Peter Saleh upgraded McDonald’s stock to “Buy” earlier this week, saying that he believes those efforts, plus the company’s new partnership with the NFL, “will generate meaningful improvement in the U.S. business.”

Additionally, the company’s stock has considerable momentum. Although it was down nearly 2 percent Wednesday, it is up more than 11 percent over the past three months.

In the Nomura survey, franchisees suggested that better weather in November and December helped sales. “First December ever that we had top-down convertibles in our drive-thrus,” one wrote. “Now winter has arrived and will impact” the first quarter.

“Many customers have commented that it has led to them getting breakfast a little later,” one wrote. “It seems very market dependent, but I have spoken to other franchisees very happy with the results.”

But franchisees surveyed were much less enthusiastic about the company’s new McPick menu.

“I am very alarmed about the discounting push that is underway in every local co-op,” one operator wrote. “I have never seen the corporation be so aggressive with discounts. They are encouraging, quite literally, everything being on sale.”

One operator wrote that he or she is “terrified” of the price point push from the company. “They say we control our prices, but we all know that is untrue. McDonald’s has long left the franchisees behind. They have unattainable reinvestment requirements while forcing the system to continue a price war with our competitors.”

Another suggested that McDonald’s relationship with franchisees is “as bad as I’ve seen in 45 years. Don’t worry if you don’t like them, they’ll change in the next year.”

Another said: “We are not turned around. We had a good fourth quarter basically because of the weather and menu price increases. We are still the low-cost provider in the industry. McPick 2 for $2 must die.”