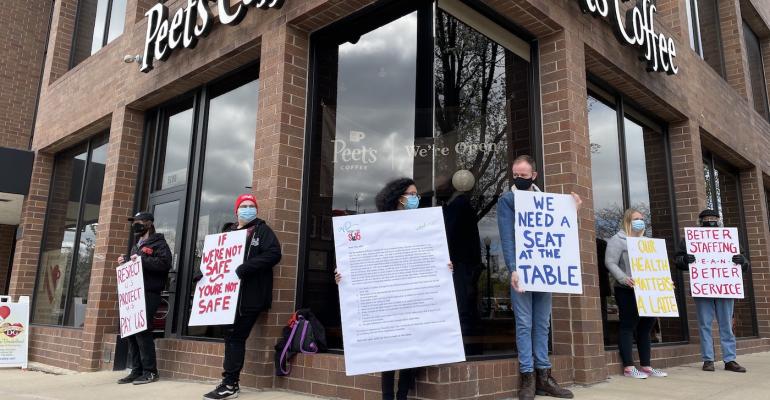 Fight for $15 and a Union
Quick-service workers expanded their protests of foodservice working conditions at a Peet’s Coffee & Tea location in Downers Grove, Ill.
Operations>Workforce

Dozens of striking workers, under the auspices of Fight for $15 and a Union, participated in a car caravan at the Downers Grove, Ill., location with demands for COVID-19 workplace protections and quarantine pay

Related: McDonald’s targeted by Fight for $15 in #StrikeForBlackLives event

Representatives for the workers said that after a new case of COVID-19 was reported at the unit within the past week, cashiers and baristas went on strike Tuesday to demand improved safety measures, paid quarantine leave and hazard pay for work during the pandemic. Thursday’s protest included a car caravan at the location in the village southwest of downtown Chicago.

“Over the last year of the pandemic, workers at the Downers Grove Peet’s Coffee have filed multiple public health complaints raising the alarm about unsafe workplace conditions that have left them vulnerable to COVID-19,” Fight for $15 representatives said. Among complaints were the lack of personal protective equipment and social distancing.

A Peet's spokesperson said Thursday, "We maintain an 'open-door policy' at Peet’s, and communication between all employees and managers is always open. We use the policy to address concerns directly with our employees."

“Recently, some workers with possible exposure to COVID-19 were placed in mandatory quarantine, for which they were expected to use their accrued sick leave before becoming eligible for quarantine pay,” the group said. “Meanwhile, other workers experiencing possible COVID-19 symptoms were not asked to quarantine, forcing them to choose between coming to work sick or taking unpaid leave.”

Miller, in her complaint, said the policy leads to workplace risks.

“When hourly employees must choose between using up their entire sick leave balance or reporting to work with possible COVID-19 symptoms, they will certainly be pressured to choose the latter,” Miller wrote. “This endangers both employees and customers.”

At the Thursday protest, worker Ann Natale, who has an 8-year-old daughter, said Peet’s workers had been “subjected to Impossible working conditions.”

"I love my job, but lately, like all of my co-workers here today, I feel exhausted and overworked,” Natale said in a Fight for $15 Chicago Twitter post.

"I enjoy my job, but lately, like all of my co-workers here today, I feel tired and overworked. I’m on strike today because we’ve been subjected to impossible working conditions." - Ann Natale, Peet's worker pic.twitter.com/EatDD0eqa8

"I enjoy my job, but lately, like all of my co-workers here today, I feel tired and overworked. I’m on strike today because we’ve been subjected to impossible working conditions." - Ann Natale, Peet's worker pic.twitter.com/EatDD0eqa8

Berkley, Calif.-based Peet’s Coffee & Tea, was acquired in 2012 by JAB Holding Co. and combined with Dutch beverage group Jacobs Douwe Egberts in 2019. It has more than 240 units nationwide.

Protests at Peet’s Coffee locations in Chicago began last September, when workers went on strike to demand hazard pay, limits on foot-traffic in-store and masks for both workers and customers.

Fight for $15 has also targeted other quick-service brands, such as Chicago-based McDonald’s Corp., over minimum wages and social issues like Black Lives Matter.

Update April 15, 2021: This story has been edited to include a comment from a Peet's spokesperson.