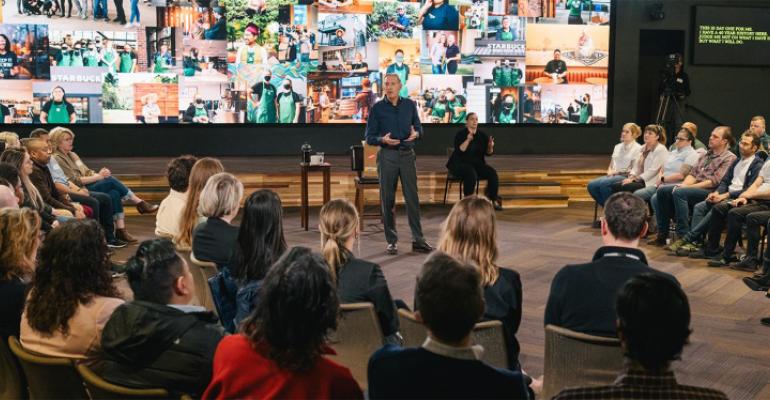 As Starbucks founder Howard Schultz takes the helm (again) this week as interim CEO after Kevin Johnson announced his retirement, he is making his position on unions clear:

“We can’t ignore what is happening […] as it relates to companies […] being assaulted in many ways by the threat of unionization,” Schultz said during a town hall-style partner open forum at Starbucks. He also added that Starbucks union SBWorkers United — which currently represents nine Starbucks cafes across the country — is “an outside organization trying to take our people.”

Schultz has been noted in the past as a staunch opponent of unions and throughout his tenure at the company from 1987 to 2018 when he stepped down as chairman of the board, not one Starbucks store throughout the country unionized, despite multiple attempts.

But over the last six months, a massive wave of unionization has swept over the Seattle-based coffee giant. Starting with workers at three Buffalo stores in fall 2021, SBWorkers United has filed for unionization at 120 stores around the country. After a contentious unionization election in December, the first U.S. Starbucks store became unionized in Buffalo, N.Y., shortly followed by another location in Buffalo in January. Since then, several more cafes have followed suit, including the latest: the New York City Starbucks roastery voted to unionize on Fri., April 1, becoming the first roastery-style store to join the fray.

Throughout the process, Starbucks has contested the election process and election results and has been accused of union-busting tactics by SBWorkers United. According to union workers, Starbucks has temporarily closed locations, overstaffed stores, and sent executives around for surprise visits to stores that have been considering representation. Starbucks has denied these accusations throughout the process, stating that the company “respects the process” and “will continue to stay true to our mission and values,” though the company believes that “a direct partnership” between employee and employer would best serve everyone.

The accusations of union-busting are currently being investigated by the National Labor Relations Board and has even been called out by a group of high-profile Starbucks investors. In March, an investor group led by Trillium Access Management and representing more than $3.4 trillion in assets wrote a letter to Starbucks urging the company to adopt a policy of neutrality instead of fighting against employees trying to gain representation

In the latest scuffle between Starbucks and the company’s union, SBWorkers United is claiming that a union leader and former barista in Arizona was unfairly terminated from the company and have filed an unfair labor practice charge against Starbucks in response. NRN reached out to Starbucks for a comment.

In a letter of re-introduction to employees and customers, Schultz did not directly address unions, but indirectly referred to the “company’s critics” saying, “They’re counting us out. But Starbucks best days are ahead of us. I promise you. Write it down.”

“The future of Starbucks, in my view, has to be something like this. We have to reimagine, most importantly the experience for our partners. And what does that mean? It’s not just wage. It’s the environment in the store. It’s the joy. It’s the sense of community, its fulfillment,” he said.

Schultz also made his first major change as interim CEO, announcing in the letter that he will be suspending stock buybacks to put that money toward investing in the company’s stores and employees.