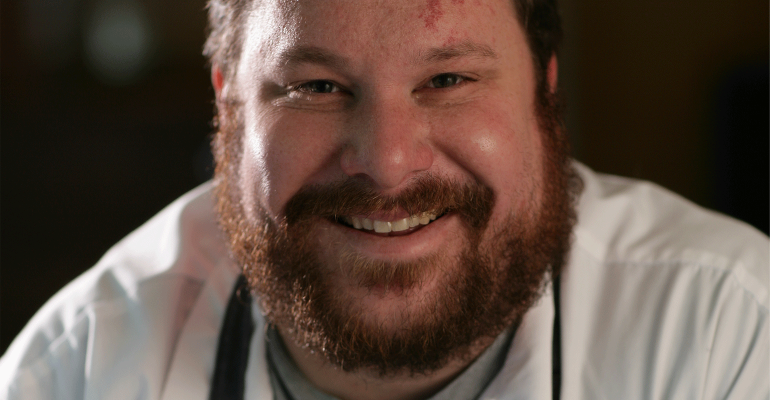 “It’s hard for me to look back and remember a time when I drank like a responsible adult,” said Ron Eyester, a Top Chef alum whose Atlanta-area restaurant group, comprised of Rosebud, The Family Dog, Timone and Diner, all went under in 2015 and 2016 as he began recovering from alcoholism.

“I was always a power drinker,” starting at The Citadel, the military college in Charleston, S.C., where he said he and his fellow cadets treated their “liberty,” the equivalent of vacations, as “being paroled temporarily from jail.

“You’d go party your ass off, and then you get to a point where you figure out how to sneak alcohol onto the barracks.”

That behavior continued, and accelerated, as he became a chef.

“Drinking and recreational drug use is very much championed in our industry,” he said. “I think your ability to drink and party is part of your reputation and credibility amongst your colleagues.”

Although he said that has changed somewhat in recent years, when Eyester was running his restaurants he said he and his staff prided themselves on showing guests a great time while having a great time themselves.

And he was as big a partier as any of them.“I mean, honestly, an average Sunday for me I’d started drinking at maybe 7:30 in the morning and basically just drink throughout the entire service. And that eventually carried on to seven days a week, and you discover that your body has to have alcohol in order to function,” he said. “It the next phase past the functioning alcoholic.”

He’d occasionally try to stop drinking — once for almost a year — “then I would reward myself with, like, just an epic weekend of debauchery. You know, drinking and strip clubs — you name it. And … I was stupid enough to believe that people were going to stop coming into the restaurant if they knew I was sober, because I had this whole persona that was established with showing people a good time.”

Figuring out when during the day he could drink was part of his daily planning.

“It was almost a business plan, that’s how bad I was,” he said. “I had to really put forth a conscious effort to be like, OK, I have a 10:30 meeting, so I can get to work and do a couple of shots. … It was almost like making a prep list in the kitchen.”

Four years ago, his lifestyle caught up with him all at once when a colleague unexpectedly passed away and he was thrown out of the house by his future ex-wife.

But first he had to dry out.

“I was in a hotel room for probably four days. ... I remember ordering room service, because I thought I was hungry, and then taking two bites of food and getting really sick, and sweating, and then you have the chills. I mean, you’re, like crippled. ... And I owned three restaurants, and here I was paralyzed by drinking, and not seeing my kids for a while.”

And he was finally ready to quit for good.

“I haven’t had a drop of alcohol since. Not to say it’s been that easy. I don’t want to degrade the process because some days are easier than others, and it’s definitely true that you can get as much help as you want, but until you’re ready to put it down, 100 percent, then it’s not going to work.”

Eyester said he doesn’t regret his decision not to drink, nor much about his years of debauchery.

“I’ve got no regrets; I drank enough for a few lifetimes,” he said. “But the funniest thing about sobriety to me is that when people find out you’re sober, they’re just like, ‘Oh my god! You must feel so good!’

“That’s bullshit. I have really honestly never felt worse. I have nothing to numb the pain. I’m 43 years old and I’ve been [working in restaurants] for 20-plus years.... It does suck to wake up and feel every nook and cranny of pain imaginable. But it’s also an incentive to pursue a healthier lifestyle, and not mask it with the camouflage of, just, drunkenness. … Mentally, yes, it’s nice to wake up and not have to figure out where you are and how you got there. It’s nice to know that your car is in the driveway. I definitely enjoy the perks of less anxiety, but my back hurts, my knees hurt.”

Eyester is currently executive chef of Food 101 in Atlanta.