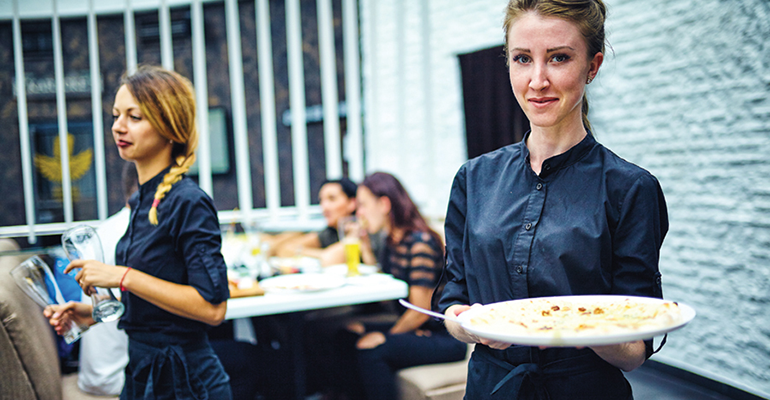 6okean/istock/getty images plus
A robust economy and shrinking unemployment mean restaurants face greater competition outside the industry to attract and retain workers.
Operations>Workforce

Restaurants adapt to the new reality of today’s workforce

Labor costs are rising and good employees are harder to find. But restaurants are adapting.

Five years ago, the proposal for a $15 per hour minimum wage seemed a ridiculous suggestion coming from radical fringe groups. That dramatic an increase would require massive menu price hikes, opponents argued. It would kill jobs and kill businesses.

Today, it seems restaurant operators are increasingly seeing $15 an hour as inevitable at a time when attracting and keeping good workers is harder than ever.

The new reality for restaurants is that labor has become more expensive. Sure, menu prices are going up, and restaurant unit growth has slowed somewhat — which some see as a good thing, given the overpopulation of restaurants in some markets.

But restaurants are not dying. They are adapting by changing the way they think about attracting and retaining workers.

Perhaps the forces behind the “Fight for $15” movement can take some credit, spurring the ongoing debate around what constitutes a living wage. 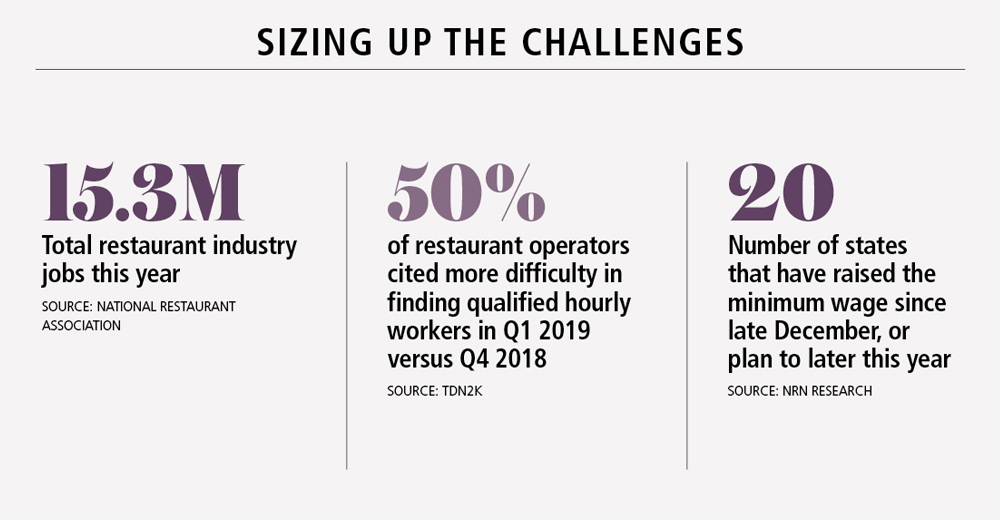 But the far more significant factor has been a labor landscape reshaped over the past few years by a strong economy and a declining unemployment rate, which topped 10% in 2009 and has dropped steadily since, reaching 3.8% in March.

The result for restaurant operators has been a shrinking labor pool. Across the country, both

chain and independent restaurants are struggling to compete for workers. According to data firm TDn2K, which publishes the restaurant industry-focused People Report, half of restaurant companies surveyed expressed increased difficulty in finding and hiring qualified hourly workers during the first quarter of 2019, compared with the previous quarter. And 51% of companies also reported increased difficulty finding qualified managers.

Restaurants are not only competing for workers within the industry. They are also competing with the growing gig economy and the burgeoning cannabis industry, both of which offer the lure of even higher wages.

In the retail world, Amazon reportedly increased its minimum wage to $15 per hour in November, and Target announced plans to hit that wage by next year.

Even McDonald’s Corp., long the target of the “Fight for $15” movement, has said it would not oppose legislation that would bring the federal minimum wage to $15 per hour by 2024.

Wages are not the only aspect of rising labor costs. Other regulatory changes are also expected to have an impact. The threshold for overtime eligibility is poised to change in a way that would make about 1 million more workers entitled to time-and-a-half pay. And lawmakers in some states are pushing to get rid of the tip credit or adopting scheduling mandates.

Some, like industry observer Jim Sullivan, argue that it’s not a labor crisis, it’s a turnover crisis. Turnover for hourly workers is estimated to be more than 150%, and 75% for managers.

To combat that trend, restaurant operators are evolving to create a more visible career path for workers, offering better benefits, such as more flexible work schedules, sick and family leave, and tuition reimbursement or other education incentives.

Operators are also looking for ways to boost efficiency by turning to automation and new technologies — not necessarily to replace workers but to free those workers up to focus more on service.

At the end of the day, adaptation to today’s labor realities must not come at the expense of the customer experience, said Victor Fernandez, vice president of insights and knowledge for TDn2K, in a recent report.

“The importance of service cannot be overstated as a key differentiating factor for top-performing restaurant brands,” he said. “We constantly see a strong pattern in which adequate staffing enables a service experience that translates into improved sales and traffic.”