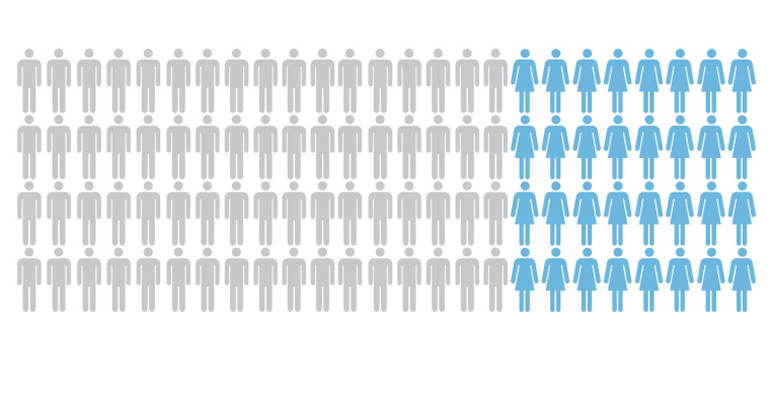 It’s no secret that there’s a gender gap in the restaurant industry. Yet the industry hasn’t tracked the specifics on the lack of women hired and promoted to the C-suite to set a baseline and measure progress.

“We’ve never really had a lot of data to say where we were and what kind of movement and progress the industry has made,” said Hattie Hill, president and CEO of the Women’s Foodservice Forum. The data comes from a recently released report of women in the food industry, a partnership between the WFF, the consulting group McKinsey and the women’s executive advocacy group Lean In. The report is part of the 2017 Women in the Workplace Study and was developed in the hopes of giving the restaurant industry the data it needs to take stock and make change.

“After almost 25 years in this business, I am thrilled to see us finally have an objective measure of progress and real data about the biggest opportunities for change,” said Denny Marie Post, president and CEO of Red Robin International Inc.

With quantifiable results, Post said there’s a chance for the restaurant industry to influence the business world at large. “We can and should lead,” Post said. “As traditional brick-and-mortar retail declines, we should be seeking the best and brightest women to join us. We must lead. We need the benefit of all the best minds — female and male — to navigate the change ahead.”

Thirty-one companies in the food industry — including manufacturers, distributors and restaurant companies — participated in the study. In addition to Red Robin, many other large restaurant brands were involved — McDonald’s Corp., Yum! Brands Inc. and Brinker International Inc., to name a few.

According to Hill, these companies needed little persuasion to take part. “There was no convincing,” she said. “They were leading us to get this done so we could establish a benchmark to start measuring the advancement.”

Now that the data has been released, Hill is excited to take a “fact-based” and “data-driven” approach to solving the contraction she sees in the food industry.

According to the report, women make consumer decisions on 85 percent of all consumer purchases and 93 percent of all food purchases in U.S. households, but when it comes to making decisions at the top level of food businesses, women don’t have an equal seat at the table.

Women make up 32 percent of those roles at restaurants, and make up 23 percent of C-suite executives in the entire food industry, including manufacturers and distributors.

Overall, when compared with the entire corporate pipeline, the food industry has slightly more women in C-suite roles. The gap between the restaurant C-suite level and outside industries has been driven by the diversity of entry-level restaurant employees, the report found, where women comprise 58 percent of the restaurant workforce and are more likely than men are to be promoted to the managerial level.

From the managerial roles, the momentum doesn’t continue for women and women of color.

“At the director, VP and SVP levels, women leave at higher rates than their male counterparts do; however, women of color leave at the highest rates of all. And as with the overall food industry, external hires for operators are less likely to be women of color throughout the pipeline.”

Despite a common and persistent misperception, women are not underrepresented in these roles because they leave the company or the workforce, according to the report.

The lack of diversity in the C-suite comes down to higher barriers for women, particularly women of color, in obtaining their first promotion and subsequent promotions. The report noted that this finding was consistent with other industries.

When companies in the food industry have an executive position to fill and they look for an outside source, the lack of diversity is even more apparent. “And at every level, women of color constitute the smallest share of external hires. In 2016, 15 of the participating food-industry companies hired a C-level executive from an external source. Zero women of color were selected to fill any of these 15 roles.”

Some restaurant companies are seeing results by making sure to include women in the interview process.

When faced with a hiring decision, Red Robin’s Post asks, “Were there any women on the slate of candidates? And, if not, why not?” Red Robin, a participant in the study, has an executive leadership team that is 50 percent women. At the VP level and above, that share rises to 66 percent.

The report also gives companies a chance to assess their progress and see if what they’re doing to promote women leadership is working. White Castle has seen change going in the right direction.

“When I started at White Castle there had been one woman in the history of the company who had risen to the rank of regional director,” said Lisa Ingram, White Castle president and CEO.

Now, half of the 10 regional directors are women, and as are half of the district supervisors, Ingram said.

White Castle has focused on developing its 10,000-person workforce, which is 62 percent female.

“We’ve focused on active engagement with programs like the Women in Foodservice Forum and other important training opportunities.  We’ve created a diversity and inclusion team that is actively engaged in making sure our commitment to diversity is feeding the hunger, hopes and dreams of our team members,” Ingram said.

Having more women in leadership roles isn’t just the right thing to do.

According to the report: “In taking the lead, the food industry will also stand to benefit economically. A more equitable workplace continues to show itself as a way to meet the triple bottom line of a socially responsible business: good for business, good for individuals and good for the world at large.”

Not to mention that hiring more women would help the industry’s battle for talent. “If you limit your consideration set to only one gender, you risk missing the opportunity to hire some of the best and brightest leaders within our industry,” said Dave Pace, CEO of Jamba Juice, another participant in the study.

“It’s critical that we recognize the data this study provides. Like many other industries, restaurants have largely been a male-dominated environment for many years, but that is changing,” he said.

And now the industry has the data it needs to monitor those changes and encourage greater diversity and more women in leadership positions.

Hill and her organization are working on an unconscious biases training and will reveal a plan for gender equity in the food industry by 2025 at the group’s annual leadership development conference from March 4-7. She hopes to have 100 companies involved in the report next year.

“We really can take that information, take the data, take the facts and develop toward those facts,” Hill said. “Because when you know better, you do better.”

White Castle’s Ingram, for one, thinks the restaurant industry is uniquely positioned for more diversity in the executive suite — and to benefit from that change. “I believe we are on the edge of a tipping point about gender, diversity and the unique strengths different perspectives provide. Fortune favors the bold, and the future belongs to those leaders, brands and organizations willing and eager to challenge the status quo,” she said.

“There’s no reason the restaurant industry shouldn’t be leading the charge, as we are the industry of opportunity, innovation and diversity.”

All data from the 2017 “Women in the Workplace Study,” from the Women’s Foodservice Forum, McKinsey & Co. and LeanIn.Org