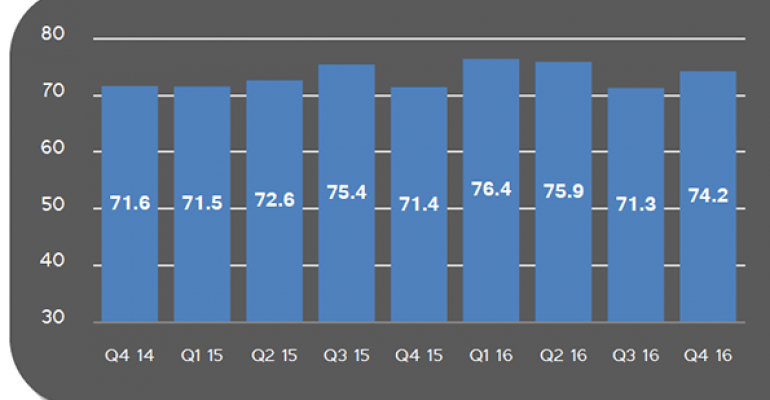 Finding quality job candidates will continue to tax restaurant operators into the last quarter of the year, according to the most recent People Report Workforce Index.

The report released this week showed the fourth-quarter overall index rose to 74.2, up from 71.3 in the third quarter. The result marked the 10th consecutive three-month period in which the reading was higher than 70, a level that represents significant recruiting and retention challenges.

The People Report Workforce Index measures expected market pressure on restaurant employment. It is based on surveys of restaurant industry human resources departments and recruiters.

The Workforce Index has a baseline value of 50, with results above that level indicating increased pressure on five components: employment levels, recruiting difficulty, vacancies, employment expectations and turnover. Results are based on expectations for the quarter underway.

“It’s continuation of what we have seen over last few quarters. Pressures remain high across the industry,” Harms said.

The fourth quarter generally shows high job growth expectations as the industry heads into the winter holiday season, he said.

“Some of it is probably cyclical with the traditional holiday push,” he said. “Part of the recipe for some pain to round out the year is that recruiting difficulty remains high, and the job growth expectations remain high. In an economy that is already taxed with low unemployment, filling those jobs might be more difficult than usual.”

The Workforce Index’s executive summary noted that the unemployment rate rose to 5 percent in September, “where it has essential hovered for the past 12 months.”

Of the Workforce Index’ four measured segments, Harms said the quick-service segment has shown steady employment pressure over the past few quarters, which he said was fueled by the low unemployment rate and declining workforce participation rates among younger people.

However, Harms said, industry turnover rates, while at a record high, were not accelerating. “We may be at a plateau,” he said.

The People Report’s overall Workforce Index rankings by industry category for the fourth-quarter report were mixed when compared with the second quarter:

“We saw some increasing pressures in casual dining and upscale fine dining,” Harms noted. “We think that might be indicative of the holiday push, where the optimist in all of us comes out for the holiday season.”

People Report, a division of analytics company TDn2K, launched the quarterly Workforce Index in in 2006.