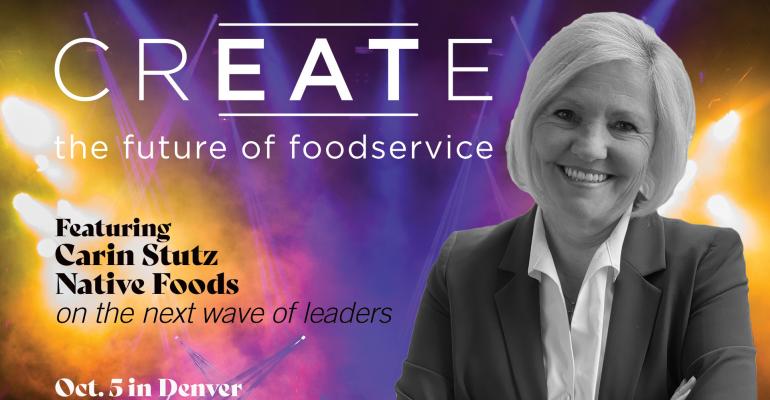 Join us in Denver Oct. 4-6 for CREATE: The Future of Foodservice, where Carin Stutz will share more on mentorship and the GLEAM Networks.
Operations>Workforce

Native Foods CEO Carin Stutz on the power of mentorship

Carin Stutz has had a storied foodservice career, working with Applebee’s, Chili’s, McAlister’s Deli, Red Robin Gourmet Burgers & Brews and now Native Foods, a vegan startup where she is the president and CEO. She’s also a founding board member of the GLEAM Network, a “global leadership enhancement and mentorship” network that started at the beginning of the pandemic. She shares her thoughts on the importance of giving back to younger foodservice professionals.

Join us in Denver Oct. 4-6 for CREATE: The Future of Foodservice, where Stutz will share more on mentorship and the GLEAM Networks.

Can you talk about the mentors you have had in your career?

I would start back really early on, when I was passed over seven times for a promotion. I thought each time it was going to be me for sure. That seventh time I saw my boss and he's like, “Hey, it's going to be a great day!” and I thought for sure he was going to tell me that I was getting the promotion. Instead, he said, “There's someone here I want you to meet,” and once again I heard, “We're going to ask you to train him and when you're done, he's going to be your boss, so do a great job!” I threw my hands on my hips and said, “Are you kidding me? When's it going to be my turn?” He turned around and he said to me, “Are you kidding me? There's not a person in this company who thinks you want to move up.”

That was the first big career “aha” moment for me. It was really a catalyst for how I thought about the business. I was one of those old-school people that thought you keep your head down, you get good results and someone will notice. Well, obviously that's not the way the game is played, and that boss really was my first mentor. We sat down and talked about being an advocate for yourself. That's a powerful lesson: that you have to learn to speak up. That’s really guided me through the rest of my career.

Can you tell me about the GLEAM Network?

We've got this lovely group of individuals who decided we're going to give back. We can all think of times in our career where we had a pivotal moment that a mentor came along at the right time and made a huge difference. Now we're looking to provide that same opportunity for the underserved communities within our industry. We want to find and create a pathway for people to figure out how they can have that conversation with their boss and be considered for a management role.

Are there particular characteristics that you look for in potential leaders?

None of us came to the restaurant industry with any big skill set. A lot of them are just learned skills. I think the restaurant industry does a fabulous job of training and teaching basic tasks, but I do think we fall short on leadership. You can watch a group of individuals working together and someone would emerge as the leader. You would see those characteristics, whether they were just confident or teaching or coaching or giving direction or just for some reason leading the team without any supervisory acknowledgement. Sometimes we just don't see it because we're so busy ourselves, but I think that's our job as leaders.

In the absence of that we have this program in GLEAM called CAP, which is the Career Advancement Program. It’s really targeted to eight to 10 BIPOC individuals, and we will have a certification program —like a mini-bootcamp — with eight classes on things like setting smart goals, all of those things that you really don’t learn unless you have a parent or mentor who’s advising you along the way. We really believe this is the key to helping unlock that amazing talent pool and bring them up in our organizations.