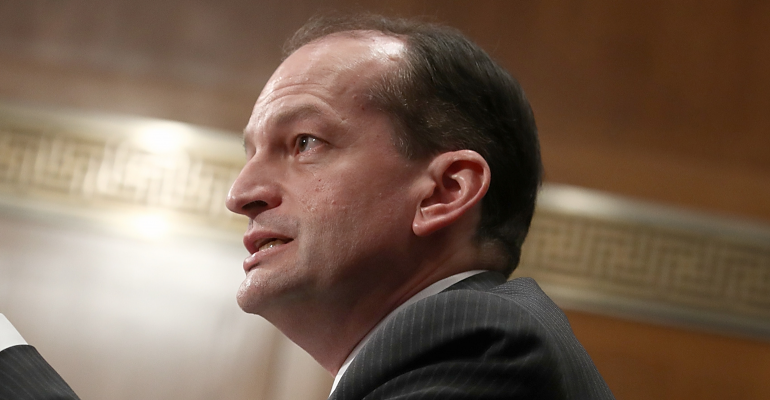 Franchise industry and advocacy groups welcomed the U.S. Labor Department’s withdrawal Wednesday of informal guidance on joint employment and independent contractors as the first steps to rolling back controversial standards.

U.S. Secretary of Labor Alexander Acosta announced the withdrawal of the U.S. Department of Labor’s 2015 and 2016 informal guidance.

“The department will continue to fully and fairly enforce all laws within its jurisdiction, including the Fair Labor Standards Act and the Migrant and Seasonal Agricultural Worker Protection Act,” the department said in a press release issued Wednesday morning.

The Labor Department’s wage and hour division had released guidelines in January that set a broad definition of what could be considered a joint employer.

Those guidelines followed an August 2015 National Labor Relations Board in a case involving waste management company Browning-Ferris Industries and staffing agency Leadpoint Business Services that found a company could be considered a joint employer even if it had only indirect or unexercised control over hiring.

In a separate case, the NLRB ruled McDonald Corp.’s could be considered a joint employer with its restaurant franchisees.

The International Franchise Association, which represents franchisors, said it applauded the Labor Department’s steps to pull back the joint-employer guidelines, adding that “unlimited joint-employer liability is one of the most costly and burdensome regulations impacting the franchise business model.”

Matt Haller, the IFA’s vice president of public affairs, said in statement that uncertainty surrounding the NLRB’s joint-employer standard had been a burden on franchisors.

“That being said, we urge Congress to now recognize the uncertainty and unreasonable costs the NLRB’s decision has placed on franchise owners and take action to find a true permanent solution,” Haller added.

The National Restaurant Association, which has filed amicus briefs in challenges of the NLRB’s Browning-Ferris ruling, applauded Acosta’s guidance withdrawal.

Shannon Meade, the NRA’s director of labor and workforce policy, said in a statement that it was “a positive step in the right direction. However, we will continue to work with the Department of Labor as well as Congress on the previous administration’s controversial joint employer standard.”

“Today’s announcement from the Labor Department is an important first step in reversing one of the most onerous regulations imposed by the previous administration on businesses,” Shay said in a statement.  “Drastically expanding joint-employer liability to hold one business responsible for the actions of another independent business, such as a subcontractor or franchisee, did nothing to protect employees and only created uncertainty that led to more growth-chilling litigation.”

Rob Green, executive director of the National Council of Chain Restaurants, said Acosta’s withdrawal of the guidance was “a common-sense response to ill-advised and unhelpful policy.”

“Rescinding the joint-employment policy will provide chain restaurant owners with more clarity about the Labor Department’s position moving forward,” Green said in a statement. “We look forward to additional administrative action from the National Labor Relations Board and a legislative response from Congress to fix the broader problems created when the new standard was created by the NLRB.”

Trey Kovacs, CEI labor policy expert, said in a statement that the Labor Department’s withdrawal was “a positive sign this administration will reverse federal rules that needlessly hamstring worker and employer flexibility in the modern workplace.​”