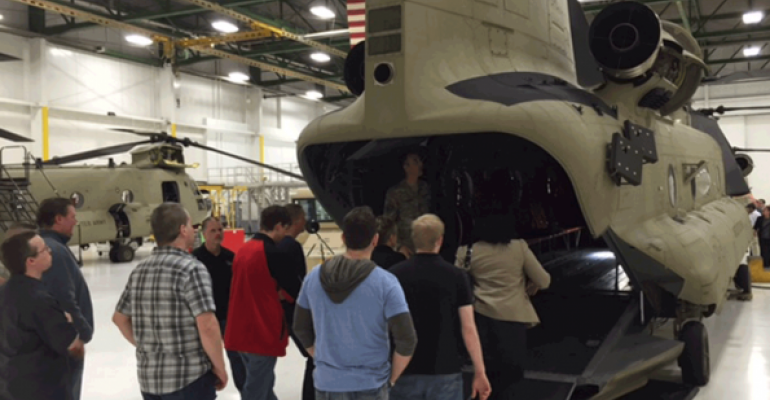 The Moline, Ill.-based casual-dining chain partnered with the Iowa National Guard on a training program last spring that consisted of hands-on workshops and talks from service members on teamwork and leadership.

“We wanted to do something different besides a lecture-and-learn series,” Ajay Singh, vice president of business development at Johnny’s, told Nation’s Restaurant News.  The chain currently has 11 units, with six in development.

In his kick-off presentation to Johnny’s employees, Randy Warm, Deputy Commanding General for Sustainment at the Iowa National Guard, emphasized the importance of teamwork.

“One soldier, one unit, one team: That’s the thing about the team concept,” Warm told Nation’s Restaurant News of his message to participants.

To start, he showed a video of his deployment to Afghanistan in 2003 and 2004, as well as footage by young soldiers from the California National Guard who have also deployed to Afghanistan.

Next, Johnny’s employees moved through a series of stations across the National Guard’s hangar, where military Chinook helicopters valued at more than $47 million are housed.

After Warm’s opening presentation, Johnny’s employees were able to go inside those helicopters to learn how National Guard service members work together to execute successful missions. At the training, Major Donald Hurt put that work into perspective. According to Singh, Hurt described a hypothetical “bad day” at the restaurant as a dishwasher failing to properly clean plates, and a customer complaining about the dirty dishes.

By comparison, a “bad day” for the National Guard could mean a young service member failing to properly fuel a helicopter, causing the aircraft to go down and threatening the lives of the 40 people on board, plus the expense of the costly helicopter.

For Johnny’s participants, the lesson helped demonstrate the importance of even seemingly minor tasks.

“I now have a way to go to someone in my organization and show them how much they mean to our overall mission of taking care of our customers,” Singh said.

Ultimately, Singh characterized the program as a success in fostering a greater sense of cooperation, teamwork and pride for Johnny’s employees.

“Our team understood the benefit in performing like a team extended beyond the front of the house and the back of the house — it was one house,” Singh said.

Beyond building cohesiveness between the front of the house and the back of the house, Johnny’s found that the hands-on nature of the program and insight from service members resounded strongly with participants.

“In this day and age, where it’s harder to find compelling messages for our team, I don’t know that I’ve found anything yet that’s been equally compelling as this and delivered a return on investment,” Singh said.

The National Guard also found benefits in the program in terms of showing civilians what their work is really about.

“It promotes a better understanding of the real military and not the Hollywood military,” Warm said.