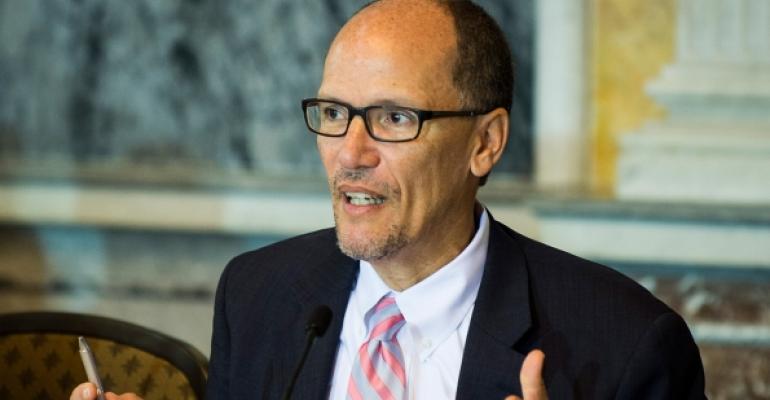 The U.S. Department of Labor on Thursday filed a notice of appeal indicating plans to challenge an injunction that last week put changes to federal overtime regulations on hold.

Labor Secretary Thomas Perez filed the notice of appeal in the Fifth U.S. Circuit Court of Appeals. The expected move comes on Dec. 1, the same day the new overtime regulations were scheduled to go into effect.

The appeal, however, does not immediately lift the injunction and employers are not required to comply with the new overtime rules until the court takes action.

It does, however, indicate that the DOL intends to defend the Obama Administration-backed rules change, despite a new administration taking office next month.

Last week, a federal judge in Texas issued a preliminary injunction freezing the rules change, saying the DOL may have overstepped its authority in establishing a salary threshold to determine exemption from overtime, as well as automatic increases to that threshold every three years.

The injunction stemmed from a lawsuit filed by 21 states in the U.S. District Court for the Eastern District of Texas earlier this year. That lawsuit was combined with a similar legal challenge by a coalition of business groups.

The new overtime rules would have raised the threshold for exemption for overtime from $455 per week, or $23,660 annually, to $913 per week, or $47,476 annually. As a result, an estimated 4.2 million workers across the country were expected to become eligible for overtime pay.

Industry groups have battled the regulations change, saying the steep increase in the threshold would raise labor costs and put employers in the difficult position of either raising salaries to keep workers exempt or converting salaried workers to hourly pay.

The injunction brought hope that the DOL’s rules would be put on hold into the new year and into the administration of president-elect Donald Trump, who some see as more likely to eliminate regulation on business.

Some, however, contend that Trump may well continue with the appeal, given the overtime regulations change would benefit middle-class workers he has pledged to support.

For many in the restaurant industry, however, the injunction freezing the regulations came too late. Many employers had already started making changes to employee exemption status or raising salary levels to comply with the rules, and didn’t want to roll those changes back.