/sites/all/themes/penton_subtheme_nrn/images/logos/footer.png
Recent
Recent
Solutions to supply-chain woes shared at the National Restaurant Show
May 25, 2022
Flavor of the Week: Korean Barbecue
May 25, 2022
Strengthen Your Website’s Online Ordering Performance with On-Demand Delivery
May 25, 2022
5 food and beverage innovations at the restaurant show
May 25, 2022
Wow Bao launches one of the first loyalty programs in the virtual restaurant industry
May 24, 2022
Featured
Tech Tracker: Toast launches POS solution for quick-service restaurants
May 17, 2022
Memphis Seoul brings Korean BBQ and Southern cooking to Brooklyn
May 11, 2022
Executives on the move: 13 restaurant leaders with new positions in April
May 03, 2022
Zaxby’s names new development, digital-technology chiefs
May 24, 2022
MUFSO
brought to you by 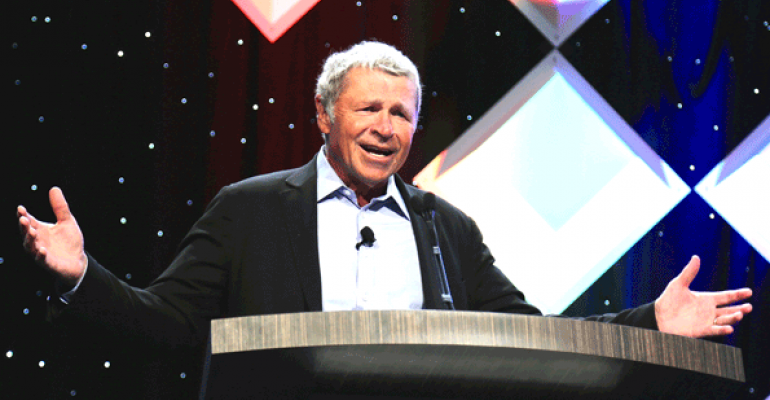 David Novak: Leaders must recognize and praise their teams

Recognition is the secret weapon to winning in the hospitality business, according to David Novak.

The co-founder and former CEO of Yum! Brands Inc. is an evangelist for employee motivation through praise. He delivered a keynote speech at the recent MUFSO conference.

“Every leader casts a shadow,” Novak said. “You set the tone for the company.”

An essential element of that tone is creating positive energy, the by-product of a culture of recognition.

“You have to take people with you to make big things happen,” said Novak, who retired from Yum in May 2016. “You have to get your ‘people capability’ right to give customers what they’re really looking for.”

Know thyself. Leaders need to know themselves, their strengths and weaknesses, and see themselves as a work in progress. Novak said that over the years he prompted members of his team at all levels to be honest when asked what they thought of him as a leader. He also asked what they would do if they had his job.

“It’s amazing how much feedback I got,” he said.

“I really feel that understanding who you are and seeking out feedback helps you become a better leader,” Novak said.

View the business as a marketer. Novak, who began his career in marketing, said marketing skills come in handy to engage both internal audiences (employees) and external groups (consumers and franchisees). He provided several examples where marketing research and techniques helped turn around consumer or franchisee acceptance of products, for instance, Taco Bell’s introduction of a new quesadilla and stuffed burrito, and the rollout of breakfast.

Create a team atmosphere. “If you want to connect with others, you need to create a team environment where everyone connects at every level of organization,” Novak said.

He recalled when he first took over the KFC system and inherited a struggling system and poor morale.

“It was the perfect opportunity to use recognition to fire up the organization,” Novak said.

Looking for something more memorable than an employee or franchisee of the month plaque, he settled on a rubber chicken, which he presented to honorees along with $100.

Photos of the winners cover the walls and ceiling of Novak’s office at the corporate headquarters.

“It’s amazing how this little floppy chicken lit up the place,” Novak said. “People were crying tears of joy. The gesture, along with other business moves, such as working more closely with franchisees to develop new products, turned the brand around.”

Novak later introduced similar kitschy awards — a giant cheese head for Pizza Hut and a set of walking dentures at Yum — ultimately doling out more than 42,000 awards over a 15-year span at Yum. The awards have inspired even more recognition worldwide across Yum’s divisions.

“There’s no question in my mind that recognition is the soft stuff that drives hard results,” Novak said.

The Monday night awards reception and awards presentation are sponsored by: Avocados from Mexico