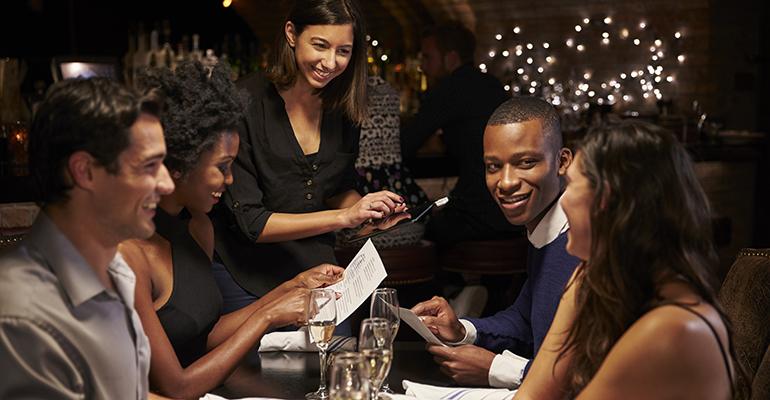 Is customer-facing service irrelevant in a digital foodservice world?

Technology may streamline service, but humans have the edge on hospitality

There is a legendary story that former USSR Premier Leonid Brezhnev told Richard Nixon in 1972. In the not-too-distant future, he said, all Russian factories and warehouses will be completely automated. No matter what the size of the facility, the only live creatures in the entire building will be a man and a dog. The man’s sole responsibility will be to feed the dog and make certain that the electricity stays plugged in so that the automated controls stay on. “What’s the dog for?” Nixon asked. “To bite the man if he touches any of the controls!” Brezhnev replied.

Welcome to a world where nearly all systems are now integrated and automated or are in the process of becoming so.  Living in an automated world augmented by technology and artificial intelligence has become so pervasive, that we hardly even notice how seamlessly we’ve transformed from analog living to digital lives.

In the last 48 hours I booked five airline flights, four hotel rooms, three cars, two vacation homes, and replaced one stolen credit card. I also bought $70 worth of groceries at Safeway, 11 items on Amazon, and transferred six payments electronically to my bank account.

I did all of this without speaking to or interacting with one live human being. Nor did I pine for that missing interaction.

And last week I simply tapped an app and had four meals from four different restaurants delivered without having to leave my house or hotel room. I did interact with a human being on those occasions for about 30 seconds each, although none of them were the restaurant’s employees. (Thanks, UberEats and DoorDash.)

And so, one wonders if customer-facing service (and the training expense associated with it) is still even necessary in a digital world? Is a customer’s time and efficiency more valuable to them than hospitality? If an app, kiosk, spreadsheet, website, tablet menu or self-serve checkout counter gets the job done better and quicker, what value is there in “giving” service when technology facilitates more efficiency — and possibly even generates higher sales.

Believe me, foodservice CEOs, CIOs and VPs of operations have been taking notice. You can see the tech transformation slowly but surely gaining ground and taking place.

The foodservice industry is traditionally a notorious late-adopter of technology, however, and we still have one foot in an analog world and the other in a digital one in terms of embracing all that technology can do for us.

For example: I ordered a pizza from one of the three kiosk screens at a quick-service pizza company in a mall last month. The ordering process took less than a minute, and less than two minutes later a human voice twice-bellowed the number on my receipt: “Number 702! 702!” I approached the counter, showed him my receipt and he slid the pizza box to me without a word or a smile and turned to the pass-through window behind him.  As I picked up the box, he whipped around and said “Just a sec, gimme your receipt.” I handed it to him and asked why. He tore the receipt in the middle, handed it back and said “Don’t wantcha coming back saying you didn’t get your food.” The transaction was fat on the high tech, skinny on the high touch. The customer waiting next to me noticed the transaction and muttered, “Can’t wait till they teach a kiosk to smile back.”

So here’s the thing: Sooner rather than later, the guy sliding me the box will be out of work. Not because of his lack of customer service skills, but because technology has replaced him and no one will miss his ability to yell out receipt numbers. (Indeed, recent TV commercials confirm that this position has apparently already been eliminated by a robotic window where the pizza appears.)

The situation is not unique or new to foodservice of course. The process began decades back with gas station attendants losing to the self-serve pump, evolved to ATMs replacing bank tellers, and then Priceline eliminating travel agents. And the beat goes on. The McKinsey Global Institute estimates that up to a third of the American work force will have to switch to new occupations by 2030 as a result of tech disruption.

If a job does not entail designing or deploying software skills, it is a potential victim of technology replacement. Thus Flo the Waitress will be sidelined by Karen the Kiosk, and Carlos the Cook will be exchanged for Flippy the Robot. In a recent New York Times article titled “Are Robots Coming for Your Job? Eventually, Yes”, columnist Steve Lohr writes: “The work of the future, it seems clear, is going to be digitally inflected. Software skills are increasingly essential to every field. Most tech workers no longer work in the tech industry, and that trend is accelerating.”

So given the tech disruption, how do we redefine service-giving in a digital world? First, don’t confuse the word service with hospitality. Service fulfills a need; hospitality fulfills people.  Technology’s current sweet spot is providing service. The HR and training department’s future sweet spot is hiring and teaching the fewer employees how to excel at situational hospitality.  Second, learn how to efficiently transact and effectively transform the customer experience at the same time.  High tech goes better with high touch.

Here are four strategies to help attain and retain our Digital Diners in 2019 and beyond:

It’s not enough to be digital. You still have to deliver a superior experience. Learn to do the ordinary in extraordinary ways. Continuously ask: What’s the best way to do the work? And who’s doing it better than us?

I don’t foresee restaurants in the future employing only one GM and a dog — health code violation. But I do foresee a dining public that will increasingly value time, price and efficiency over superficial congeniality from uninspired servers and crew. The key is creating and maintaining a culture of kindness that is maladjusted to mediocrity.

The future comes at us one hour at a time, and it’s in your hands. Do something now. Change is inevitable; growth is a choice.

Jim Sullivan’s two bestselling books, Fundamentals and Multiunit Leadership have been purchased by over 500,000 foodservice leaders and readers. You can get them at Amazon or Sullivision.com. Jim has over 400,000 social media followers and you can join the conversation on Twitter, YouTube and LinkedIn.