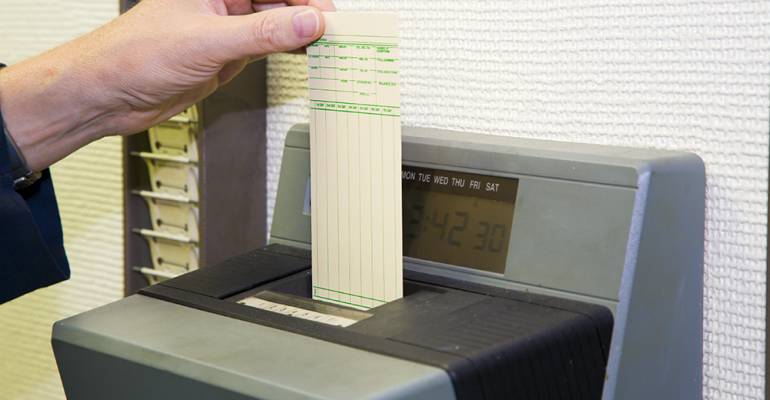 A closer look at off-the-clock work

In today’s “always connected” world, the lines between on-the-clock and off-the-clock work can sometimes get a bit blurry.

When it comes to paying restaurant employees, however, the courts are increasingly defining those boundaries more clearly.

A recent California Supreme Court ruling found that Starbucks unfairly required an employee to perform several tasks related to closing the restaurant after he had clocked out. The ruling found that even small amounts of time spent doing work-related activities must be compensated.

While federal law prevents employees from making claims for small amounts of unpaid time, the Starbucks decision could set a precedent for California, legal experts said.

Other states have seen similar lawsuits. Chipotle Mexican Grill recently settled a lawsuit filed by workers in Colorado and Minnesota in which several employees alleged they were not fairly compensated for off-the-clock work related to closing the restaurants.

In order to avoid similar legal troubles, restaurant operators need to put themselves into the shoes of their employees to determine the exact procedures workers follow when clocking in and out of work, according to legal experts. They also need to ensure that their managers are trained to abide by state and federal labor laws.

“Many employers don’t realize there may be off-the-clock work going on,” said Aaron Colby, a partner in the Los Angeles office of Davis Wright Tremaine LLP. “Once you identify it, you should determine if it is irregular off-the-clock work — for instance, a minute infrequently without pattern — or if it is regular, in the sense that every single day or every single week it actually takes place.”

If the work is regular or material, it must be compensated, he said.

Colby cautioned restaurant operators to take a close look at small, seemingly insignificant tasks that their workers might be asked to perform when off-the-clock, not only before and after their shift but on unpaid breaks as well.

Employers who electronically prevent their employees from clocking in prior to the start of their shifts and/or during meal periods must make sure the employees do not work during that time.

There are several potential problem areas that restaurant operators should be aware of, Colby said, such as requiring hourly employees to shut down point-of-sale, or POS, systems or perform other closing duties after they have clocked out.

“If you have an employee regularly clock out on the POS, but the employee then has to shut down the POS or close the restaurant, that may be problematic,” said Colby.

Calling hourly employees while they are off work, even for a minute or two for scheduling purposes, may also be a tricky situation for restaurant operators, said Colby.

If these practices occur infrequently, they may fall outside the parameters of work that must be compensated, he said. But if it’s a regular thing, it might be compensable.

Similarly, “on-call policies, if they’re too restrictive or limiting, could trigger off-the-clock work,” Colby said, if the on-call time is so restricted that it would be considered work time.

David Amaya, a partner in the San Diego office of Fisher Phillips, agreed that employees might need to be compensated for extra time if they are called in to work on short notice.

“There are a litany of factors the courts will consider in addressing whether that on-call time needs to be paid, but one of the most important factors is how much time the employee is given to get to the job,” he said, noting that 30 minutes is normally considered minimum notice so that the time need not be compensated.

“If there are enough factors indicating an employee is being engaged to work while ‘on call,’ then that entire period may need to be compensated,” Amaya explained.

California also requires that employers compensate workers for at least two hours of pay if they are sent home early or their shift is canceled, Amaya said.

Still unclear, however, is whether workers need to be paid for two hours when they are told to call in to find out if they are needed for a shift, he explained.

Hiring good managers and training them not to ask employees to perform any tasks when they are off the clock is important, said Amaya.

“What gets people in trouble sometimes is when a manager has employees just do something very minor before clocking in,” even if it only takes a minute or two, he said.

Jeffrey Rhodes, an attorney with Doumar Martin in Arlington, Va., recently wrote in a blog post for the Society for Human Resource Management, or SHRM, that employers should take steps to ensure that their managers “resist pressures to allow or encourage” off-the-clock work.

“Such pressures may be economic or practical in nature, but any variance from written timekeeping policies can lead to collective-action lawsuits and other serious legal consequences,” he wrote.

In many cases, off-the-clock work occurs not because it is part of a formal job description, but instead is the practical result of the way things unfold at the restaurant, said Amaya of Fisher Phillips.