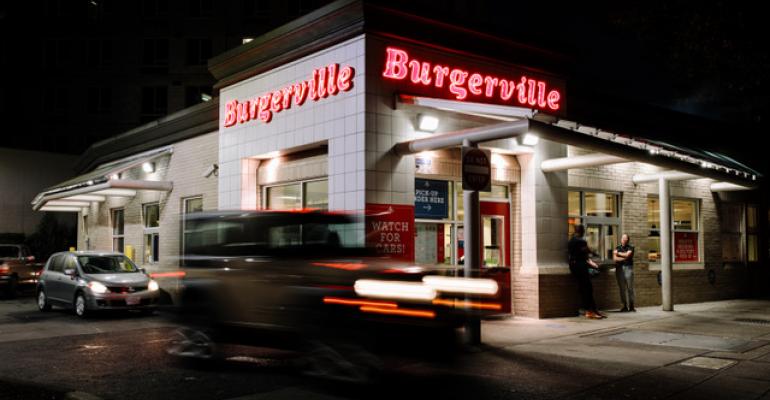 Burgerville is looking to work hand-in-hand with the union in the future.
Operations>Workforce

With Starbucks making headlines lately for its pushback against some Buffalo, N.Y. stores attempting to unionize, unions have become a topic of debate — rare as they are within the restaurant industry. Vancouver, Washington-based 40-unit burger chain, Burgerville, is about to become one of the nation’s first quick-service restaurant chains to negotiate a union contract.

Burgerville and the Burgerville Workers Union – which represents five of Burgerville’s locations, all in the Portland area — have been working on negotiating a contract since 2018. The agreed-upon contract covers wage increases for all hourly union workers until it reaches $15 an hour and tipping in all restaurants (both of which underway starting in 2019) and expanded sick leave, parental leave and vacation time. The contract is expected to undergo ratification by union members (and approval by Burgerville leaders) before it goes into effect, likely by the end of 2021.

“Even prior to the union forming, minimum wage is higher here in the Pacific Northwest anyway,” Hillary Barbour, director of strategic imitative at Burgerville told Nation’s Restaurant News. “[…] As part of the negotiations, we were able to accelerate the minimum wage increases that we're keeping ahead of. I think that’s a win for everyone, and we will continue to apply those [wage increases] across the board, whether union restaurant or not.”

Related: Starbucks directly asked its employees to vote ‘no’ on unionizing

Although Burgerville would not comment directly on whether or not the company initially approved of one-eight of its stores unionizing nearly four years ago (Barbour said that they respect the rights of their employees to unionize and could not take a position by law), other restaurant companies have made it clear that they don’t think unionizing is a fit for their employees, like president of Starbucks North America, Rossann Williams saying, “we are asking partners to vote no to unions not because we are opposed to unions” but because Starbucks wants to work with employees “in a direct partnership.”

But for Burgerville, working with a union has been a learning experience for both parties:

“We found common ground in a number of places which makes for a better relationship between employer and union,” Barbour said. “It was new territory for the union and new territory for us. We built a platform where we could collaborate trust and testing out new policies like tipping in union locations first to work out the kinks before rolling it out to the rest of the company. There were some things we agreed on and other things we had to negotiate.”

Like most restaurants, one of the top issues Burgerville is currently facing is labor shortages. Barbour said the company has been using TikTok as a recruitment tool and trying to interview employees over social media instead of asking for paper applications. With the union negotiations, she hopes it will have a positive impact on labor numbers as they work on becoming the “Best in class employer” that will give Burgerville a competitive advantage over other restaurant employers.

Besides increased hourly wages and tipping, Burgerville is looking to add an extended scheduling period that can help create some scheduling certainty in case of a conflict, as well as offering vacation time for employees that have met certain criteria, and expansion of paid sick leave.

“It’s a new chapter going forward,” Barbour said. “But we’re excited and proud that we can be a leader. It'll be interesting to see whether this [union contract] has an influence on the industry.”