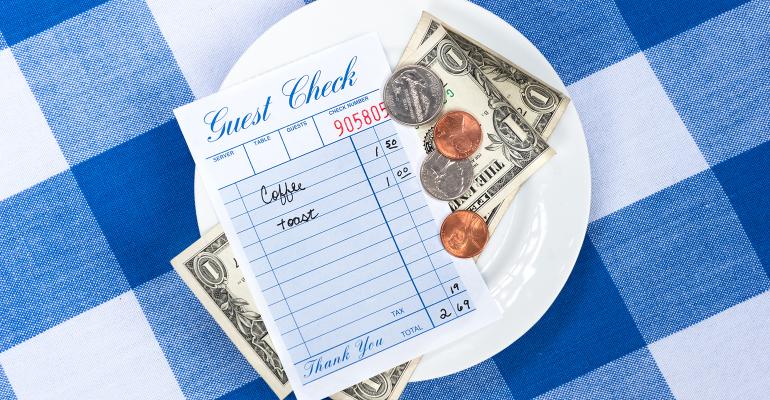 Dana A. Kravetz is the managing partner of Michelman & Robinson LLP and chair of its Hospitality Industry Group. Lara A. H. Shortz is also a partner at the firm. This article does not necessarily reflect the opinions of the editors or management of Nation’s Restaurant News.

Here’s a scenario: an extraordinarily decadent meal — yellowtail with jalapeño and lobster ceviche, perhaps — impeccably served by polished waitstaff at one of L.A.’s hottest new restaurants, where reservations are nearly impossible to secure.

Here’s another: an uninspired, bland pasta primavera dinner presented by an indifferent server at a generic casual-dining spot in the suburbs of Portland, Ore.

In either case, when the check arrives, the customer paying the bill will add, on average, an 18-percent gratuity. That’s because the custom of tipping is woven into the fabric of full-service dining in America.

It wasn’t always this way. Tipping was literally a foreign concept until just after the Civil War, when American travelers to Europe brought the practice back home with them. Then considered by many a gauche show of newfound worldliness, tipping met real resistance, including some anti-tipping laws dating back to the early 1900s. Those laws were repealed relatively quickly, and over time, paying a gratuity after a restaurant meal became what it is today — more of an expectation than a reward from satisfied customers.

Bad service: The Department of Labor and Ninth Circuit

While it’s common knowledge that those in the chain of service — waitstaff, captains, bussers, bartenders and runners — are the beneficiaries of tipping and associated tip pools, most diners have no idea that it’s against the law for gratuities to trickle down to so-called “back-of-house” workers — chefs, cooks, dishwashers and porters.

In 2011, the Department of Labor issued regulations that prohibit employers from forcing tipped employees to share gratuities with non-tipped staff. In 2016, the Ninth Circuit upheld the rule in Oregon Restaurant and Lodging Association v. Perez.

In 2015, the Fourth Circuit issued a contradictory opinion in Trejo v. Ryman Hospitality Props., Inc., finding an arrangement to redistribute tips was not barred by the Fair Labor Standards Act (FLSA) where no tip credit was taken, a decision that mirrored the pre-2011 law in the Ninth Circuit.

The economic and social impact of the Ninth Circuit’s sanction of the labor department’s 2011 regulation cannot be understated. What has been created, unbeknownst to the average tipper, is a climate within the restaurant industry of haves and have-nots.

As the minimum wage continues to creep upwards — currently on its way to $15 per hour in California — and menu prices jump markedly, tipped employees are making significantly more money than their back-of-house cohorts, and vast multiples of what they earned decades ago.

In fact, over the years, as front-of-house workers have prospered, there has been only a meager increase in compensation paid to kitchen workers that merely reflects incremental raises in the minimum wage.

A reservation at the Supreme Court?

What should restaurant owners do about the disparity, and why should this issue resonate with them at all? Those are both important questions, but before addressing them, here’s a status report in the aftermath of the Ninth Circuit’s ruling in the Oregon Restaurant and Lodging Association case.

The National Restaurant Association has filed a petition for writ of certiorari to the U.S. Supreme Court seeking to overturn the Ninth Circuit’s decision and render the DOL’s 2011 regulation unlawful. By way of the petition, the NRA challenges the prohibition preventing tips being shared with cooks, dishwashers and the like.

To that end, in National Restaurant Association et al. v. U.S. Department of Labor, the labor department’s authority to regulate tip pooling is called into question. The NRA’s petition asserts the Ninth Circuit not only created a split with the Fourth Circuit, given its conflicting decision in Trejo, but also conferred a level of unrestrained power to the labor department — and all federal agencies, for that matter — to impose draconian rules beyond the scope contemplated by Congress.

Whether the Supreme Court will hear the NRA’s case remains to be seen. It is certainly under no obligation to do so. The numbers are daunting — of the more than 7,000 cases it is asked to review each year, the Supreme Court typically accepts between 100 and 150; ordinarily, matters of national significance and ones that might harmonize conflicting circuit court decisions. While these two qualifiers certainly apply to the NRA’s petition, only time will tell if the high court will intervene.

For restaurateurs, bridging the pay gap between the front and back of house is critical, as is the need for the Supreme Court to address the split in authority between the Fourth and Ninth Circuits. Why? Because the current disparity in pay between tipped and non-tipped workers creates simmering resentments that can easily manifest in disgruntled kitchen staff pursuing an assortment of actions against their employers. As otherwise stated, unhappy employees are more prone to pursue costly class action and individual lawsuits against their restaurant bosses for wage and hour violations, discrimination, and other potentially relevant claims.

Likewise, the economic imbalance inside restaurants is bound to cause conflict between staff, which can negatively impact the dining experience, result in service that suffers and ultimately hurt business. More reason for restaurant owners to be concerned — aggrieved employees could make the workplace ripe for union activity.

Finally, the absence of a uniformed law from jurisdiction to jurisdiction caused by the split in authority between circuits makes it difficult for restaurant chains to implement consistent policies across state lines when it comes to tip pooling. For all these reasons, the divide in the restaurant industry — financial and cultural — must be confronted. But how?

If the Supreme Court reverses the Ninth Circuit decision, restaurant owners could move to equalize the pay disparity between tipped and non-tipped staff. But even if the Supreme Court takes a pass, or upholds the labor department’s 2011 regulation, the game is not necessarily over for those hoping to foster wage equality. For one, the Trump administration may roll back burdensome regulations, a practice it has already begun to exercise in other sectors. At the same time, work can be done to implement long-considered modifications to the tipping model.

In light of rising minimum wages and healthcare costs, some restaurateurs — most notably New York’s Danny Meyer — seek to eliminate tipping altogether in favor of higher menu prices that would allow for increased restaurant-wide wages. Others contemplate skirting the current tipping laws by charging all-inclusive service fees that would allow restaurant owners to distribute pay more equally among workers, and also foot the bill for their healthcare. But how realistic is such a tectonic shift given tipping’s longstanding place in our culture?

It is undeniable, whether served that delicious yellowtail with jalapeño or the mediocre pasta primavera, that diners are conditioned to add gratuities to the bill. The upshot: for restaurants to bridge the pay gap between the industry’s haves and have-nots, something has got to give. Perhaps that is by way of Supreme Court intervention, action by the Trump administration or considerable changes to the tipping paradigm and consumer behavior. As it stands, the answer remains unclear.

Lara A. H. Shortz is a partner and litigation attorney at Michelman & Robinson LLP. She represents clients in the hospitality, restaurant, and food and beverage industries. Contact her at [email protected]lp.com.