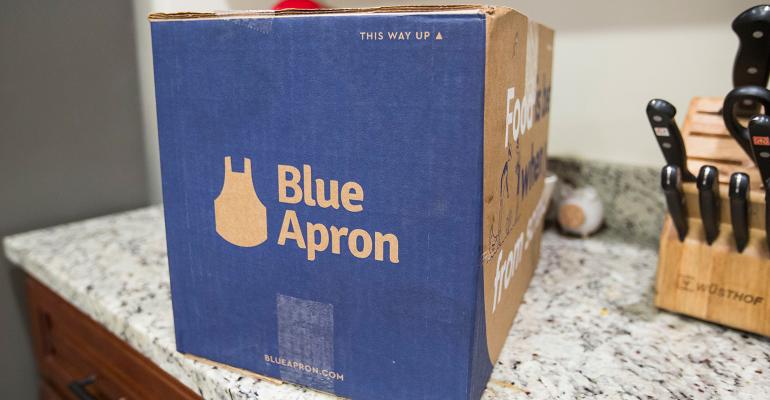 Blue Apron said in a financial filing this week that it has laid off about 6% of its 5,400-member workforce as part of a “company-wide realignment.”

The layoffs, totaling more than 300, included employees in marketing, software development, operations and business development at its New York headquarters, as well as a smaller number of workers at the meal kit delivery firm’s fulfillment centers around the country, according to a report on CNBC.

In a letter to employees filed with the Securities and Exchange Commission, Matthew Salzberg, CEO, said the cuts were “necessary as we focus the company on future growth and achieving profitability.”

“The actions that we took today flowed from the roadmapping and reprioritization exercise that we recently undertook,” he said in the letter. “As part of that work, we identified the need to reduce some roles, open others, and streamline decision making for greater accountability.”

The company said it expects to incur about $3.5 million in employee-related expenses from the realignment, primarily for severance payments, in the fourth quarter.

Blue Apron, which has seen its stock value fall nearly 50% since its initial public offering in June, is the target of multiple shareholder lawsuits alleging improprieties with its disclosures related to the IPO. One suit alleges, for example, that the company failed to disclose in its prospectus that it had already planned to reduce spending on marketing in the second quarter, which led to reduced sales and profits.

The company, considered the largest meal kit provider in the U.S., posted a second-quarter loss of $31.6 million on revenues of $238.1 million in its first filing as a public company.

Chuck Cerankosky, an analyst with Northcoast Research, Cleveland, said Blue Apron has been operating with a high level of labor relative to its sales, but the layoffs are not a good sign.

“Bringing labor costs in line with orders is a good thing, but this is supposed to be a growth company, so maybe orders are going in the wrong direction,” he said. “We won’t know until the company reports its third-quarter results.”

Cerankosky is projecting a “significant loss” for the company’s third quarter, which it is scheduled to report on Nov. 2.

“The issue here is there’s a company that’s quite unprofitable, and the business channel they are in is quite competitive,” he said.

The meal kit space has been heating up rapidly, but questions remain about the viability of subscription-based delivery services such as Blue Apron, HelloFresh, Chef’d, Marley Spoon and others. Several retailers, including Kroger, Hy-Vee, Wegmans and Publix, have introduced their own in-store meal kits, while Albertsons recently acquired Plated, considered to be the second-largest meal-kit delivery provider in the U.S.

“The in-store capability from some of the supermarkets chains is, I think, a very formidable competitive front,” said Cerankosky.

He said that while Blue Apron is “clearly trying to provide a meal-preparation experience with a product,” that product is expensive to deliver and easily duplicated.

Meanwhile HelloFresh, the meal kit provider based in Germany, said last month that it was ramping up its hiring in the U.S.

The company, which is also considering an IPO in Frankfurt, Germany, in September said it has named Tobias “Tobi” Hartman as president of its North American operations and Brett Banchek senior VP of supply chain. The company also recently named Stacy Gordon to the position of chief product officer.

It has more than 60 open positions in the U.S., including jobs in data science, engineering, finance, food safety, marketing operations, product and procurement, according to a company statement last month.

“With Tobi we intend to move to the next era of growth,” said Dominik Richter, co-founder and CEO of HelloFresh. “Having him as part of the Global Management Board positions us to pursue both our continued growth in the U.S., as well as accelerate our global expansion.”

According to a Bloomberg report last week, HelloFresh has been telling potential investors that it is overtaking Blue Apron as the largest meal kit company in the U.S.

HelloFresh, founded in 2011, the year before Blue Apron, currently bills itself as the largest meal kit delivery company in the world, with operations in the U.S., Canada, the U.K., Germany, the Netherlands, Belgium, Australia, Austria and Switzerland.

The company posted revenues of 230 million euros (about $272 million U.S.) in its fiscal second quarter, up 53% over year-ago levels.