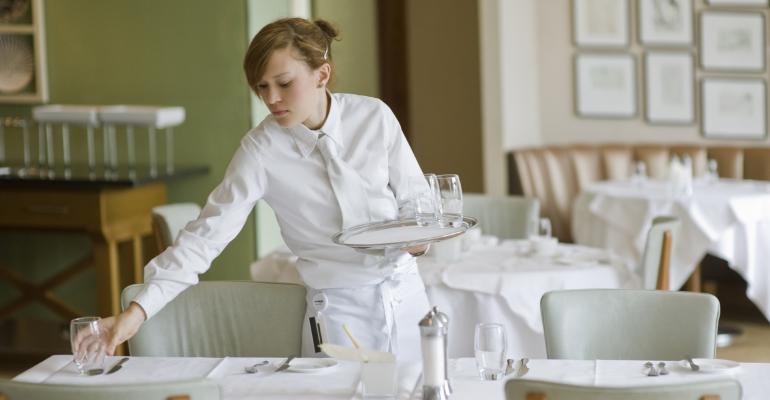 Reza Estakhrian / The Image Bank / Getty Images
Despite the increased operational difficulties, restaurants have been able to excel when it comes to ‘food’ sentiment.
Operations>Workforce

Restaurants continue to post better sales than they did in 2019. Unfortunately, sales growth is slowing down and is propped up by unusually high average guest check growth. Guest counts continue to fall.

Sales growth was 6.0% during October, a small decline from the 6.3% reported for September. It was a much bigger drop from the peak of 8.2% reached in July.

Guest counts have not recovered to their pre-pandemic level and are softening. Traffic growth was the worst for industry since March, at -6.4% in October. Meanwhile, restaurants are still challenged by staffing constraints, which are complicating restaurant execution. The latest data from Black Box Workforce Intelligence™ suggests the industry may be taking some steps back when it comes to staffing levels in recent months.

Given the staffing limitations, it is no surprise to see more negative online reviews about restaurant ‘service.’ The percentage of these ‘service’ comments classified as positive decreased by 1.1% year-over-year during October. The average for the last three months fell by a similar 1.0%. In fact, October had the smallest percentage of positive ‘service’ mentions since the beginning of the year. The peak was reached in February, when sales were still down and there was less pressure on execution.

Despite the increased operational difficulties, restaurants have been able to excel when it comes to ‘food’ sentiment. The percentage of food-based comments in reviews that were classified as positive improved marginally year over year in October (+0.4%), while the three-month average remained essentially flat.

‘Service’ guest sentiment has been slipping since Q2, when more people started going back to restaurants. Specific areas like speed of ‘service’ being negatively affected is not surprising given the combination of higher guests counts and rising turnover levels.

Meanwhile, guests are noticing issues in the speed of ‘service’ they are receiving when visiting restaurants, with limited-service brands experiencing the biggest problems. Net sentiment specific to speed of ‘service’ was down 13% in Q3 year-over-year. Speed of ‘service’ sentiment was down by an even larger margin (16%) compared to immediately before the pandemic (Q1 2020). Speed is one of the main attributes of the limited-service experience and value proposition. Guests are sensitive to issues related to how quickly they can get their meals.

Out of the 25 biggest markets in the country, the one with the most positive guest sentiment based on restaurant ‘beverages,’ ‘ambiance’ and ‘intent to return’ was Orlando. This designated market area consistently has positive net sentiment.

New York is leading the country in strongest net sentiment for restaurant ‘food’ and ‘service.’ Restaurants there may not be under the same pressure as those in other parts of the country. Out of these 25 largest markets, New York ranked third worst in October based on traffic growth, with guest counts still dropping in double-digit rates compared to where they were in 2019.

The story is quite different for San Francisco, which seems to be challenged on many fronts. Despite being the major metropolitan area with the worst traffic growth results during October, restaurants there are having a hard time providing their guests with a solid restaurant experience. San Francisco had the lowest net sentiment based on restaurant ‘food,’ ‘service’ and ‘value’ during the month.

Financial metrics are “same-store” metrics & reported on a two-year comparison unless otherwise noted.