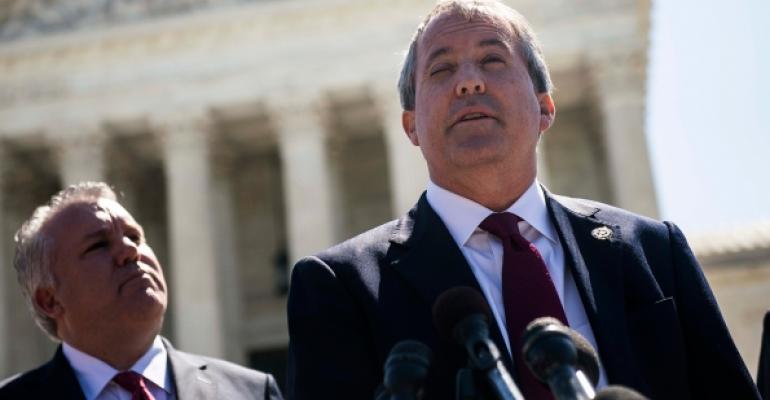 <p>Texas attorney general Ken Paxton says new overtime regulations are illegal because they are set to ratchet up the threshold for eligibility automatically every three years without valid congressional authorization.</p>
Operations>Workforce

Twenty-one states have joined forces to challenge the U.S. Department of Labor’s new overtime rules in a lawsuit filed in a Texas federal court Tuesday.

The attorneys general of Texas and Nevada filed the lawsuit in U.S. District Court for the Eastern District of Texas, calling the overtime regulations “illegal” because they are set to ratchet up the threshold for eligibility automatically every three years without valid congressional authorization, according to a statement from Texas attorney general Ken Paxton.

The complaint also contends that the new rules, which are scheduled to go into effect Dec. 1, will substantially increase labor costs for many states, local governments and private businesses, and will likely result in layoffs and job elimination.

“Once again, President Obama is trying to unilaterally rewrite the law,” Paxton said in a statement. “And this time, it may lead to disastrous consequences for our economy. The numerous crippling federal regulations that the Obama administration has imposed on businesses in this country have been bad enough. But to pass a rule like this, all in service of a radical leftist political agenda, is inexcusable.”

The new rules would raise the threshold of eligibility for overtime from $455 per week to $913 per week, or $47,476 annually. Under the shift, an estimated 4.2 million more workers across the U.S. would be eligible for overtime pay.

The rules also include an automatic update to the salary threshold every three years – a point also challenged in the lawsuit because it allows changes without going through the rule-making process, and without consideration of current economic conditions.

The complaint also argues that the Department of Labor regulations rely too heavily on salary level, not the type of work performed, to designate exempt status.

The Department of Labor did not immediately respond to requests for comment.

“I think that’s a strong legal argument,” Amador said. “We spent quite a bit of time saying we don’t think you have the authority to do this.”

The NRA is looking into the possibility of joining in the lawsuit in some way. Amador said the association was still reviewing its options.

For restaurant operators across the country, the legal challenge could result in a stay that might push back the enforcement date.

“The court will be fully aware of the deadline coming in,” Amador said. “It could delay the process, pending the final outcome, which wouldn’t happen until next year.”