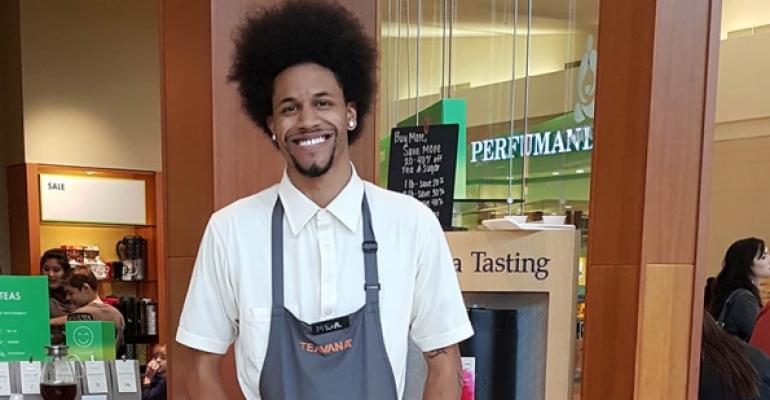 Starbucks, Taco Bell and Papa John’s are among restaurant chains joining forces for a massive hiring fair scheduled for Thursday in Los Angeles that will target “opportunity youths,” or young people who are neither working nor in school.

The event is the third such 100,000 Opportunities Initiative outreach launched by Starbucks in 2015, along with about a dozen other employers, with the goal of hiring 100,000 young people nationwide by 2018. The coalition of employers has since grown to include more than 30 companies, including both national and local restaurant chains, as well as representatives from the retail, airline and hotel industries.

More than 4,000 youths are expected to attend the day-long event at the Los Angeles Convention Center, which will include workshops, college counseling, skills training, resume building and other interactive events for job applicants and their families.

Services like LinkedIn will help attendees set up social media profiles, for example, and department store Nordstrom will offer advice on dressing for job interviews. Community groups and social service organizations will also be on hand, along with city and county officials, including Los Angeles mayor Eric Garcetti.

Additionally, employers will interview candidates and potentially make job offers on the spot.

Similar events have been held in Chicago and Phoenix, which collectively drew more than 6,000 young people and generated an estimated 1,300 job offers among the employers involved, according to event organizers.

The Los Angeles event, however, is the largest yet, and one that targets a market with a huge pool of unemployed young people.

An estimated two in five people who are unemployed in Los Angeles County are between the ages of 16 and 24, with 19 percent of those absent from the workforce and school, organizers said. Nationally, the coalition estimates that 5.5 million young people are not working or in school.

“We’ve got 5.5 million disconnected young people not in school or work. I think we can all agree that’s a crisis that needs to be addressed, and the opportunity is to address that collectively,” said Lacey All, director of strategy for Starbucks.

“These are incredibly talented young people,” All added. “They are your children, your nieces and nephews. They’re hungry and they want opportunity.”

Starbucks, for example, hired Mychal Brown as a Teavana partner at the youth fair in Phoenix.

“I went to the fair to practice my speaking skills,” Brown said in a statement. “I had no idea that the company would actually hire me on the spot.”

The events are also an opportunity for restaurant chains to showcase benefits such as tuition reimbursement and job training to build a career path for youths starting in entry-level positions.

Two months into his job at Teavana, Brown is eligible for Starbucks’ College Achievement Plan, which provides tuition to Arizona State University. He plans to pursue a degree in nutrition, healthy living and wellness, with a minor in psychology, Starbucks said.

Amy Kavanaugh, chief public affairs officer at Taco Bell, which was a founding member of the coalition with Starbucks, said the initiative makes sense from a business standpoint.

“There are about 3.5 million entry-level jobs available, and we have 5.5 million opportunity youths nationally,” Kavanaugh said.

While Taco Bell has long recruited young workers, the event in Los Angeles is particularly important because it’s so near the Irvine, Calif.-based chain’s home market.

Taco Bell interviewed hundreds of young people and offered nearly 200 positions between the Chicago and Phoenix events, she said. “We found that kids were really, really ready. They’re looking for opportunities.”

Papa John’s joined the coalition for the second event in Phoenix. Although the Louisville, Ky.-based pizza chain is 80-percent franchised in the U.S., the company has served as a liaison at the events to push hiring opportunities to franchise operators.

Steve Ritchie, Papa John’s president and chief operating officer, and a franchise owner in the Midwest, said he started with the chain at age 21, earning $5 per hour as a customer service representative and working part time to help pay college tuition.

In 2014, Papa John’s hired more than 14,000 people in the 16-to-24-year-old demographic, accounting for about 60 percent of the chain’s hires. The company said that 98 percent of hourly team members are promoted to management positions within restaurants. At Papa John’s, the average salary, including bonuses, for a store manager is $75,000.

“We like to say you’re three promotions away from being a general manager if you’re just starting out of school,” Ritchie said.

More 100,000 Opportunities events are planned this year. Next up is Seattle in late spring, and the initiative is looking to stage events in Dallas, New Orleans and elsewhere, All said.

“They’re one day, but they’re catalytic in force,” All added. “They bring together all these systems that serve youth but sometimes don’t coordinate.”