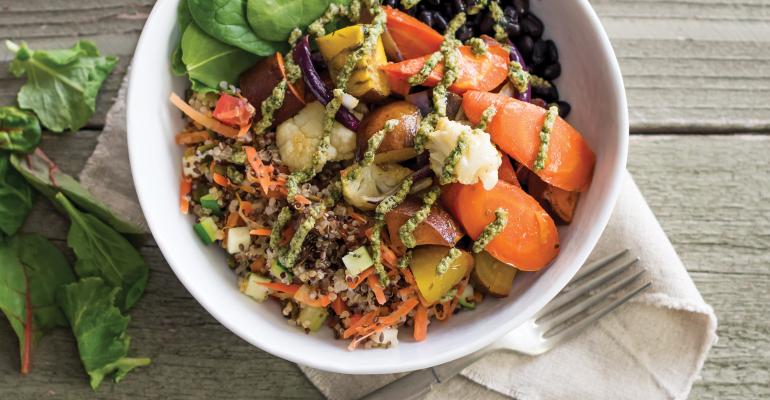 When it comes to whole grains on restaurant menus, quinoa has arguably become the most ubiquitous. A gateway grain of sorts, quinoa has opened doors for chefs to experiment with enthusiasm — and for diners to eat with gusto — less familiar varieties of whole grains, such as amaranth, barley, farro and spelt.

Sharky’s, which has more than 20 restaurants, primarily located in Los Angeles, Orange and Ventura counties in California, has been using quinoa in several dishes, from salads to sides, since 2013. Most recently, the chain added a Roasted Veggie Bowl, made with baby greens, quinoa, black beans and roasted vegetables (carrots, beets, yams, Brussels sprouts, cauliflower and red onion), all organic and mixed with a walnut-cilantro pesto. Launched last fall as a limited-time offer, it was such a hit that it was recently added to the chain’s permanent menu.

The popularity of quinoa on Sharky’s menu has inspired the chain to explore other whole grains, including farro, tuxedo barley and black rice, to use in others dishes, including a new salad to be launched by early July.

"Whole grains offer a deep, soul-satisfying flavor,” said chef Michael Fiorelli of Love & Salt, an Italian-inspired restaurant in Manhattan Beach, Calif. “These days I’m loving many [whole grains]. If I had to choose, I would say farro, rye and spelt — grains that I can cook or mill.”

Fiorelli is currently featuring whole grains in several dishes, including the Freekehlicious Salad, made with five grains (freekeh, red quinoa, farro, fregola and black rice), five herbs (rosemary, sage, parsley, mint and basil), shaved radish, black currants and toasted hazelnuts; and the Rabbit Porchetta, which is served atop a bed of black rice and farro. Grains are central to Greek cuisine and play a prominent role on the menus at Mike Isabella's trio of Greek restaurants Kapnos, Kapnos Kouzina and Kapnos Taverna, all in and around the Washington, D.C., area. “Ancient grains” accompany the spit-roasted meats, like his lamb, which comes with a salad containing bulgur, wild rice, amaranth and sprouted lentils. It’s also served with tzatziki.

“The test of a great chef is in elevating simple ingredients through thoughtful technique,” said George Pagonis, executive chef and partner at Isabella’s three restaurants. “We relish the challenge found in serving these humble ingredients that are packed with flavor, depth and nutrition.”

To meet diners’ growing desire for more healthful offerings, Ban Stewart, executive chef of Kowaliga Restaurant, a seasonal Southern comfort food spot on Lake Martin in Alexander City, Ala., best known for its fried catfish, has been adding a number of healthier dishes to its menu, including some with whole grains. Among the better-for-you complements to its popular fried catfish is a whole grain salad with kamut, sorghum, millet, kale, mixed greens, roasted pepper, red onion, cucumber and radish all tossed in a scallion vinaigrette.

“Kowaliga had always been known as a fried catfish place, even though we’re so much more, so we’ve started to do different items to get away from the fried image,” Stewart said. “These grains have high nutritional values, and we chose them for this salad because of how they cook up.” Among the bestselling dishes on the menu at Blue Ribbon Federal Grill in New York City’s Financial District is a grilled shrimp and farro salad, with Florida white shrimp, farro, poblano peppers, grilled corn and pomegranates dressed with lime cumin dressing and served atop mint labneh.

"[Whole grains] are very versatile and can be savory and sweet, sour or bitter, they even have a hint of umami when done just right," said Bruce Bromberg, co-owner of Blue Ribbon Restaurants. “You can only eat potatoes and rice so many ways. It is just a great way for chefs and customers to explore the options that are out there."