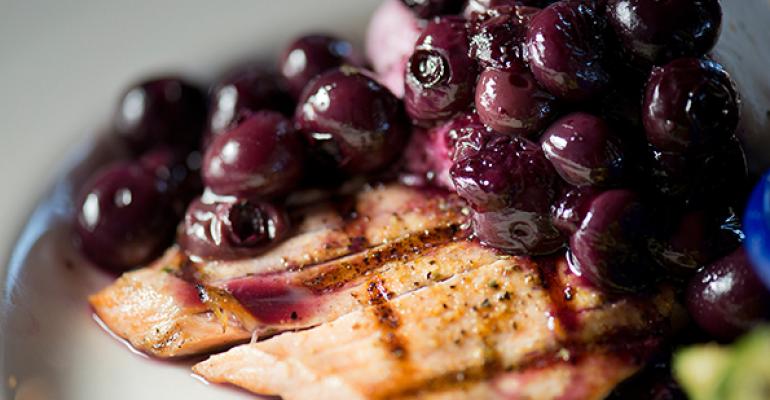 Chefs add berries and stone fruit to salmon, Baby Back Ribs and chicken

Summer’s beautiful bounty of berries and stone fruit typically show up on restaurant menus in the form of pies, ice creams and sorbets, and other sweet meal-enders. This summer, however, many menus are featuring these bursting-with-flavor fruits in savory entrees and salads.

Currently, the restaurants are serving Oh So Blueberry Goat Cheese Alaska Salmon. Drawing on seasonal and flavorful regional ingredients, the dish features wild Alaska salmon fillets topped with California goat cheese that is then broiled and topped with a sauce made of Oregon blueberries (a variety called “Duke”), orange liqueur and basil.

“I love the blueberry sweetness with the goat cheese tartness. Combined with the distinctive flavor of the salmon, it is truly a unique combination of flavors not found on any other menu that we know about,” said Bill Ranniger, Duke’s Executive Chef.

Ranniger’s personal favorite dish, the blueberry salmon has been the best-selling salmon items ever since it went on the menu seven years ago. Other savory fruit dishes more recently added to the menu at Duke’s include Cherries Everywhere Salmon, made with broiled Wild Alaska salmon with local Washington Cherries and Grand Marnier butter sauce; a wedge salad with cherries; and, coming soon, a Blackberry Halibut.

“Our guests like these dishes and they sell well,” added Ranniger. “They are unique and have good stories about farmers, fishermen and chefs.”

At Crave Fishbar in New York City, Executive Chef Todd Mitgang is serving a gooseberry and avocado salad. The savory-with-a-touch-of-fruit salad is made with avocado, diced asparagus, gooseberries, chopped romaine and arugula with a grapefruit-chipotle vinaigrette and topped with queso fresco.

“Gooseberries are incredibly dynamic—they have a great texture and are both tart and sweet,” said Mitgang. “Typically, avocados like acidity— if you think of lime in guacamole—and gooseberries lend themselves to flavor the avocado in the same way.”

Mitgang says the salad has been a hit with guests ever since it went on the menu in April.

Also serving a savory fruit salad this summer is Hibiscus in Dallas, Texas, which is offering the Charred Octopus Salad, made with cucumber, watermelon and blueberries.

A number of meat-centric chains are also adding fruit-meets-savory entrees to their menus.

In June, Mission Viejo, Calif.-based Sizzler, the national chain known for steak and salad bar, brought back to its craft salad bar a Quinoa Fruit Salad, made with quinoa, strawberries, blueberries and mango in a honey-lime dressing with mint. Part of the chain’s seasonal salad rotation, a spokesperson for the chain said the dish was created to “elevate its prepared salads, combining on-trend, clean ingredients with a new level of culinary flare.”
Taking advantage of its location in the heart of Texas blackberry country, Cole’s Backyard Grill, a new fast-casual concept, is serving up a number of savory dishes featuring the local berries, including Blackberry Chipotle Chicken, Blackberry Chipotle Baby Back Ribs and Blackberry Chipotle Salmon.

“For summer, we wanted to come up with a menu item that reflected the fun and refreshing feeling of summertime,” says chef Adam Baird, The Habit’s vice president of food and beverage and creator of the new limited-time special.

“When we think of summer foods, we think of delicious ripe strawberries and pair that with fresh greens and a tasty vinaigrette. There’s nothing more crisp and energizing than that.”