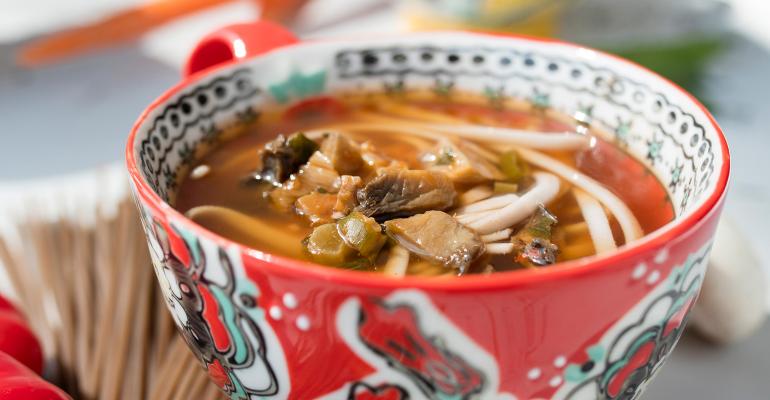 With snacking on the rise, soup satisfies as a smaller meal that’s both versatile and flavorful

Consumers are eschewing traditional dayparts in favor of increased snacking, and restaurant traffic is slowing at lunch and dinner.

Soup is stepping in to fill the gaps. It’s also proving to be a versatile canvas for introducing new flavors to customers, as well as being easier to execute for operators.

More comforting than salad, and easier on operations, soups, stews and chilis are appearing more frequently as main courses on menus — up 3.3 percent over the past four years, according to menu research firm Datassential — while they’re on the decline as appetizers and sides. Salad entrées, by contrast, are down 2.1 percent on menus.

“If you could sell only soup in a retail environment, it’s actually a very easy business. The other stuff is more complicated,” said Andrew Schnipper, who, with his brother Jonathan, founded Hale and Hearty Soups in 1995. They sold the New York City-based chain, which now has 29 locations, in 2006.

But selling only soup is a risky proposition, and soup-centric chains, such as Hale and Hearty and Detroit-based Zoup! typically serve sandwiches and salads as well.

Although soup is becoming more common as a meal, soup sales are still seasonal, especially in warmer climates, and can vary widely by location and even daily weather conditions.

Still, soup can be easy to add as a special on cold days, which is what Atlanta-based Uncle Maddio’s Pizza does. Jenelle Brown, vice president of operations and training for the 42-unit chain, said that on cold days franchisees can make a tomato, basil and goat cheese soup by adding cream, goat cheese and balsamic reduction to the chain’s tomato sauce, and topping it with basil. Soup can also be a robust addition to a fast-casual restaurant’s assembly line. Matt Weingarten, culinary director of 14-unit Dig Inn, based in New York City, recently added a line of vegan broths, which add variety to the menu and underscore the chain’s sustainable ethos by using vegetable scraps and leftovers from its fresh-juice program.

Weingarten adds kombu and an array of aromatics — star anise, dried shiitake mushrooms, coriander, black pepper, thyme, rosemary, onions and parsley — to the roasted scraps, “so it’s a very rich, deep, nutrient-rich broth that forms the base of our soups,” he said. “It’s very satisfying straight up.”

Dig Inn even sells the broth to go in paper coffee cups, for $5, much like two-unit Brodo, also in New York City, and one of the originators of the bone broth trend, does with its broths, starting at $9 each.

Additionally, customers can walk the ordering line, choose any vegetables they want and pour the broth on top.

Soup is also a way to introduce customers to new flavors and ingredients, said Eric Ersher, CEO of 99-unit Zoup!

The Dragon Fire Noodle Bowl is a spicy combination of vegetable broth, Sriracha sauce, soba noodles, red curry, mushrooms and scallions. Ersher said the soup is Zoup!’s first very spicy offering — so spicy that staff had to be trained to warn customers about it.

“The ones that liked it really liked it, but it certainly was not for everybody,” he said.

Also new is the Spicy Singapore Squash soup, which is much milder than the noodle bowl. The soup is made with coconut cream, curry paste, vegan broth, garlic, ginger, lime and butternut squash.

Ersher also experimented with alternative proteins in the bison chili and rattlesnake sausage stew. He said the soups helped create buzz and bring excitement to the chain.

“Because we offer folks an opportunity to sample, it seemed like it would be a great way to add to their experience, while not necessarily making them commit to something that was a little out of their comfort zone,” Ersher said, adding that sales of the rattlesnake sausage “surpassed our expectations.” Zoup! offers 12 soups, rotated at the discretion of franchisees. The most popular items are the hearty and comforting classics you might expect, including chicken pot pie, chicken and dumplings, lobster bisque, shrimp and crawfish étouffée, and spicy black bean chili.

Hale and Hearty serves 20 soups at its restaurants, and chicken vegetable remains the top seller, “hands down, every day, in every location,” said Erica Gillespie, director of store development.

“If a new soup sells half as much, then it’s great,” she said.

Still, Hale and Hearty has been introducing a new soup every week since September, because customers are constantly looking for something new, Gillespie said.

“Our guests are definitely more daring with their food choices now,” she said. “I think they’re willing to experiment with more flavor profiles.”

The new items are made in the chain’s Brooklyn, N.Y., commissary and introduced at all New York City locations on the same day. If they do well, they stay on the menu until the sell out.

“We do see differences in preferences from one neighborhood to the other, which is very interesting,” Gillespie said.

Spicier flavors and miso are growing in popularity, she said, so executive chef Bruce Rogers introduced a Spicy Wild Mushroom Soup with red miso, shiitake, cremini and enoki mushrooms, tomato and sambal “for a little kick — it won’t set your hair on fire, but it’s got a nice little heat on the back.” What a soup is supposed to taste like varies from region to region.

“It’s not even region-specific, but almost location-specific,” he said, noting that even within New England, clam chowder can vary from very liquidy to very thick, “depending on how far up the coast you go.”

When looking for franchisees, Keshin seeks people who understand their markets, and allows them to customize based on local taste.

The Goldsboro, N.C., location makes all of its soup from scratch with family recipes, such as a Stuffed Bell Pepper Soup made with ground beef, tomatoes, rice, green bell peppers and secret ingredients, served with a slice of housemade bread.

The homemade versions sell better than soups the chain purchases.

“Part of that’s the marketing, but part of that is they’re just good,” said Mike Feretti, CEO of Great Harvest Bread. “I’m surprised they don’t all weigh 400 pounds, it’s so good.”