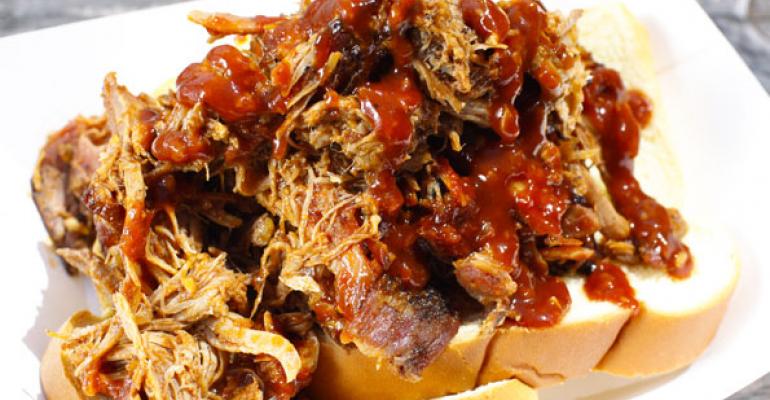 Barbecue season is quickly coming upon us, and although there’s much discussion of what sauces and proteins are best suited for serving it, a consensus seems to be emerging that what’s most important is flavor that comes from the low-and-slow style of the cooking method itself.

According to Technomic Inc.’s Market Intelligence Report: Barbecue, the flavors that resonate the most with consumers don’t typically come from sauce. The two descriptors that appeal to them the most are “grilled” and “smoky.” As a result, chefs and operators at all segments are finding ways to bring more of those appealing flavors to their food.

“Smoking is a unique barbecue thing; it lends itself to particular cuts of meat,” said Brad Hofman, director of marketing at Lucille’s Smokehouse BBQ, a 19-unit chain based in Signal Hill, Calif. “It’s an artisan process … it sets it on a whole other level.”

Lucille’s customers order smoked chicken, beef tri tip and three types of ribs that are smoked, then grilled, and then basted with one of the chain’s three sauces.

“It is surprising to me to see smoked chicken sales as much as they are,” he said. “This happens to be one of my favorite items on the menu. It is a very delicate flavor that really shows off the smoke.”

At the two Bubby’s in downtown New York City, whole animals are purchased and butchered in-house and then pit-smoked over cherry wood or apple wood.

“Pit-smoked barbecue has many lovable qualities,” owner Ron Silver said.  “People love the sweet, spicy and tangy crust, also known as bark, that forms around the meat while it slowly cooks over the smoky wood. And, of course, the smoky flavor.”

Not having smokers in its restaurants isn’t stopping Mission Viejo, Calif.-based Sizzler from getting in on the smoky barbecue trend. Later this month, the 152-unit chain will replace its old St. Louis-style barbecue ribs with a new “Pick 1, Pick 2” barbecue promotion featuring barbecued baby back ribs and pulled pork, as well as hand-breaded chicken tenders.

The ribs and the pork will get their smoky flavor from a new rub of mesquite seasoning and smoked salt, and by being cooked low and slow over a pan of liquid smoke and water.

“When you think of barbecue, you think of smoked meat,” said Tamra Scroggins, Sizzler’s director of food culture. “You can smell it outside the restaurant … that smoke smell really brings people in.”