The United States has become a nation of snackers, or noshers, if you will. While some nutritionists might frown on the widespread practice, it's proving to be a profitable opportunity for chain restaurants able to offer items that meet consumers’ diverse snack needs and set them apart from the growing pack of snack competitors.

Just about anything can be a snack, the survey reveals. Candy, mini sandwiches or wraps, hummus, salads, bakery items, beef jerky, bread sticks and falafel are all snacks that operators say they currently offer on their menus.

Tampa, Fla.-based Checkers and Rally’s Hamburger are among the many chains that have been experiencing — and responding to — consumers' growing demand for snack items.

“The snacking opportunity has been one of the leading engines of our sales growth for the last five or six years,” says Terri Snyder, chief marketing officer for Checker's and Rally's. “It’s been almost 70 percent of our growth over the last few years.”

“These are all products we've been able to engineer with pretty good margins,” Snyder says. “[And] no one else is doing [them], so there’s no competition.”

What started out as a traditional breadstick — an add-on to pizza orders, actually — has become an entire platform of snacks for Whitewater, Wis.-based Toppers Pizza. Topperstix are now available in such flavors as pepperoni, bacon, taco, cinnamon and chocolate bacon.

While the original garlic butter is still the chain’s bestseller, Toppers is continually adding variations to appease new trends and consumers’ evolving tastes. In 2015, Toppers will launch its newest stix: pretzel with garlic, butter and sea salt.

“Topperstix has been a huge differentiator for us,” Iversen says. “It's a different product from what you’re going to get from the big guys.” 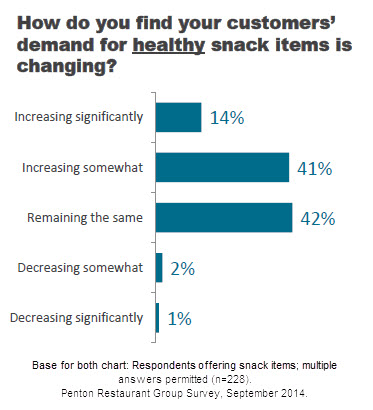 While anything can be a snack, an increasing number of customers are demanding healthy options, the Penton survey found. Thirteen percent of operators say demand for healthy snacks has increased significantly and 41 percent of those surveyed say they see demand increasing somewhat.

Among the healthy snacks requested at chains are such items as fresh fruit, nuts, fresh vegetables, yogurt, gluten-free items and salads, operators say.

Southern California-based The Coffee Bean & Tea Leaf is delivering on nearly all of those items with its recently re-launched snack program. This fall the coffee chain rolled out a premium selection of yogurt parfaits, savory sandwiches and picnic boxes designed to fit the tastes and lifestyles of its health-conscious and time-pressed customers.

“Coffee and tea are often associated with pastries so for our new food program we aimed to expand that mindset and offer fresh and wholesome items that work well for any time of day and incorporate trend-forward ingredients,” says Diane Kuyoomjian, vice president of marketing.

Among The Coffee Bean & Tea Leaf's new items are Berry Greek Parfait, made with Greek yogurt, blueberry purée and honey nut granola; the Fruit and Cheese Picnic Box, with Gouda and mozzarella cheeses, grapes, almonds and cranberry apple crackers; and the Quinoa Garden Salad, made with quinoa and vegetables tossed with a lemon vinaigrette and mixed with arugula.

Similarly, Prairie du Sac, Wis.-based Culver’s has in recent years added more options to satisfy its customers growing demand for healthy meal alternatives. The 495-unit chain — which surveyed its customers and found that they typically eat five times a day — offers Mindful Choices, a platform of bundled meals and other items around 500 calories.

Among the offerings are combos with the chain’s signature ButterBurger or a grilled chicken sandwich, a side salad or soup and a soft drink, as well as à la carte burgers and sandwiches, vegetable side dishes, soups and salads.