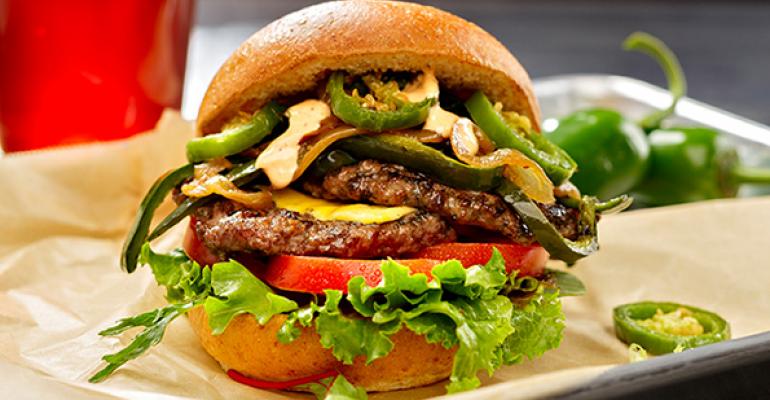 Chefs bring the heat with burgers that have a peppery kick

With restaurants continuing to add hamburgers to their menus, chefs across all segments are trying to give the sandwich a differentiating kick with spicy ingredients, such as chipotle, jalapeno, pepper Jack cheese and sometimes all of the above.

The heat just keeps on coming. The list of top-growing burger ingredients is peppered with all manner of spicy ingredients, including Sriracha, poblano, habanero, horseradish and chipotle–ranch.

“People just seem to be seeking something that takes the food to another level, takes it out of the mundane,” said Beef ‘O’Brady’s CEO Chris Elliott. “They’re looking for food that surprises, but delivers on taste.”

To satisfy customer desire for something bold and different, Beef ‘O’Brady’s added an Amarillo Firecracker Burger to its new menu in August. The Angus beef burger is topped with bacon, fried jalapenos, pepper Jack cheese and sweet jalapeno mayo.

The burger, created by the owner of a Beef’s unit in Amarillo, Texas, as part of the chain’s annual “Burgers Across America” offering, was the promotion’s best-selling burger.

“Spice gives some vibrancy to food,” said executive chef David Maini. “If you do it right it, it brings out freshness. It makes food more exciting.”

El Diablo started out as a weekly special two years ago, quickly moved to the main menu and is now one of the most popular item of more than a dozen beef burgers on the menu.

For diners who want more fire than freshness, M Burger, a Chicago mini-chain, created the Hurt Burger in three different degrees of spiciness.

“It’s built on the basic BBQ, [but] the levels of heat are unique,” said Tim Hockett, M Burger chef and partner. “It’s a fun little thing to have on the menu.”

Inspired by a comment made during an early taste test that the barbecue sauce was so spicy it “hurt,” the Hurt Burger began as a secret menu item, one only in-the-know customers could order. But other customers soon caught on and wanted their chance to feel the burn, so the chain moved the Hurt to the permanent menu about a year after opening. Today, Hurt burgers account for about 15 percent of the chain’s burger sales.

“They feel the slight bit of accomplishment after eating something spicy,” Hockett said. “After someone has our Hurt burger, they definitely come back. It becomes addictive. ”