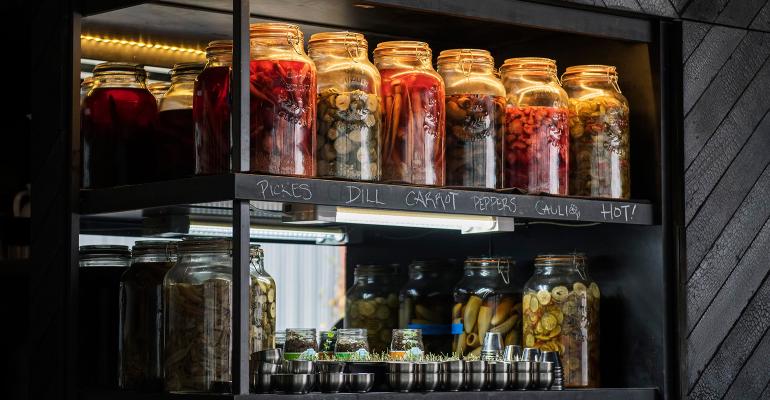 TAG Restaurants
A show of pickled fruits and veggies at Mister Tuna in Denver.
Consumer Trends

Once relegated to the occasional side dish or entrée accent, pickles, including all manner of fruits and vegetables, and even pickle juice, are gaining popularity and playing bigger roles on menus across the country.

Pickles appear on more than 40 percent of all menus, about 15 percent more menus than they did just four years ago, according to Datassential MenuTrends.

Pickles have continued to grow on menus in part because of passionate pickling fans such as Troy Guard, chef and owner of Denver-based TAG Restaurant Group.

Guard features pickles in various ways on many of the menus at his eight concepts, but most prominently at his newest concept, Mister Tuna, where he offers an entire pickle bar.

“I wanted to try something out of the box, a pickle bar instead of a raw bar,” Guard said. “I thought it was colorful, flavorful and a good talking point.”

Behind the raw bar at Mister Tuna is a wall of about two dozen housemade jars of pickled vegetables and fruits — from cucumbers and kohlrabi to lemons and rhubarb.

While the items on the bar can be ordered as pickle plates, the pickles aren’t simply a side dish — they’re also a component of several entrées. For example, the Smoked and Shaved Octopus Sunumono has pickled hijiki seaweed, cucumber, radish and fermented tomato water. The Oak Grilled Hanger Steak is prepared with local mizuna, aji amarillo, pickled cipolinni, charred asparagus and pickled eggs.

“[Pickles] are fun, and they seem to work, and people dig them as well,” Guard said. Various pickles and pickling techniques are featured in the Tsukemono Board at Departure Restuarant + Lounge in Portland, Ore.

Also highlighting pickles is Departure Restaurant and Lounge in Portland, Ore., which is offering a Tsukemono Board with five to six different pickles featuring various techniques. Items might include traditional cold vinegar and sugar pickles; lacto-fermented pickles of kimchi, turmeric cabbage and spicy Brussels sprouts; and umeboshi, salt-cured and naturally vinegared green plums with purple shiso. Those pickles are also incorporated into various dishes on the main menu. The Traveler’s Terrace, bartender Laura Kruming’s pickle-juice-infused take on a Perfect Manhattan at Sable Kitchen and Bar in Chicago.

Nick and Toni’s in East Hampton, N.Y., offers a Bloody Mary Board, a do-it-yourself cocktail with house Bloody Mary mix, vodka and an array of spicy and sour pickled cucumbers, pickled cherry peppers and pickled cauliflower.

“This is a trending ingredient in cocktails because it's so unique,” chef Chris Starkus said of the turmeric. “Additionally, it has healing properties. ... That's the part I especially love, since my cooking revolves around better health — using healthier, locally sourced ingredients.”

Fried pickles are more indulgent than healthful, and still largely served as an appetizer or sidekick to sandwiches, but they are making a major contribution to the growth in pickles on menus. Fried pickles now appear on 6 percent of all menus, a 9-percent increase in the past year, and 85 percent more than four years ago.

Among the many restaurants serving fried pickles are American Whiskey in New York City, which has for some time served a starter of fried cornichons with its signature (f)ranch dressing. Super Chix, a fast-casual chicken and custard spot in Dallas, pairs fried pickles with select sandwiches.