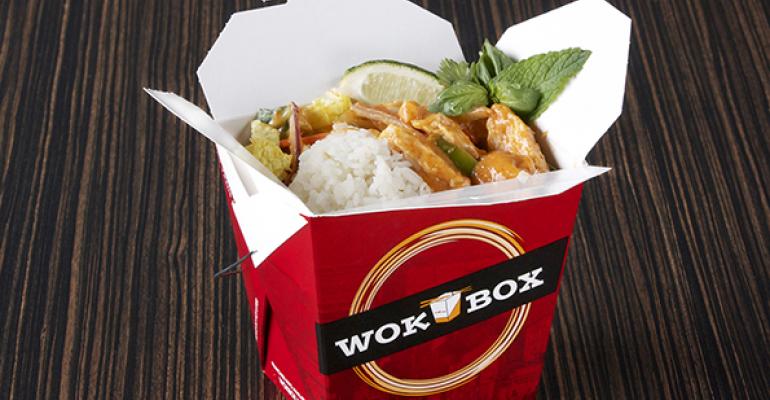 Use of the herb has grown 25 percent on menus across all segments in last four years, Datassential says

Two years ago, mint was used sparingly on the menu at Wok Box Fresh Asian Kitchen, mostly to tone down spice on a few dishes. These days, the herb has found its way into 40 percent of the items on the six-unit, fast-casual chain’s menu.

Mint, a common herb in Vietnamese cooking, is a key ingredient in Wok Box’s signature herb mixture, made with mint, basil and cilantro, that tops many of the restaurant’s noodle, rice and curry boxes.

“The cilantro gives it a brightness, the basil adds savory, but the mint really mellows everything,” Carson said.

The chain also puts mint in more than half of its custom infused waters, such as cucumber mint, watermelon mint and, the most popular, lime mint.

While Wok Box has always used mint in its curry dishes, it began increasing use of the herb after some kitchen experimentation and testing revealed that customers found it particularly appealing, especially when paired with the lime wedge included on many dishes.

Mint is growing in more places than just Wok Box’s menu. According to the latest research from Datassential MenuTrends, the fragrant herb has grown 25 percent on menus at all segments in the last four years. While the strongest growth is coming from beverages, mint has been growing in appetizers and entrées as well. Mint now appears in 50 percent more appetizers, 19 percent more sides and 16 percent more entrées than it did four years ago.

There are more than 30 different varieties of mint, several of which appear in dishes on the menu at Easy Bistro + Bar in Chattanooga, Tenn. For example, black mint, also known huacatay, appears in the Roasted Wagyu Hanger Steak entrée with chive horseradish whipped potatoes, baby carrots, and peppercorn Burgundy truffle jus. Pineapple mint, a mild, citrusy-tasting variety, is in a small plate of Maine Lobster Salad with candied grapefruit, rémoulade blanc, pickled baby fennel and Bibb lettuce. And petite mint is used in a small plate of Sea Scallop Carpaccio with cucumber, sorghum popcorn and winter radish.

“I always have mint on my menu somewhere,” said Easy Bistro chef de cuisine Peter Barlow. “It’s very versatile. They all work in different ways and they all taste different.”

At Tulio in Seattle, chef Water Pisano serves lamb sirloin with mint syrup and mint and basil yogurt, a riff on the old-fashioned fine-dining dish of rack of lamb with mint jelly.

“That was the traditional dish that inspired me, but I wanted to update it with the fresh mint, the sweetness of basil and the tartness of Greek yogurt,” Pisano said. “I like the brightness and freshness it instantly gives to a dish. Reminds me of great Mediterranean, Greek and Italian flavors.”

Pisano’s modern take starts with mint and basil yogurt on the plate, followed by fregula sarda pasta with Castelvetrano olives and currant, topped with sliced lamb sirloin (which has been dry rubbed and roasted), and finished with a drizzle of strained mint syrup. Though the dish has been on the menu a few years, Pisano says it sells too well to remove.

At Tre Enoteca, a Tuscan-inspired spot in San Antonio, Texas, executive chef and owner Jason Dady uses mint as a finisher to add “fresh and vibrant flavor” to two side dishes: pan-roasted Brussels sprouts with dates and preserved lemon, and Mint and Mascarpone Mashers with fried egg.

“We were after the richness of a tartar sauce but wanted to add something a little different,” Becker said. “Something that made people pause after they tasted it. By adding mint you can take a dish that is heavy and make it lighter.”